The 22-year-old man accused of fatally shooting two University of North Carolina at Charlotte students and injuring four others in a classroom last spring pleaded guilty to murder and other charges, and was sentenced to life in prison Thursday.

By pleading guilty, Terrell avoided a possible death sentence had he been convicted at trial, according to the plea deal with prosecutors. Terrell admitted in court to killing 19-year-old Reed Parlier of Midland and 21-year-old Riley Howell of Waynesville after opening fire in a classroom in the Kennedy building on April 30. 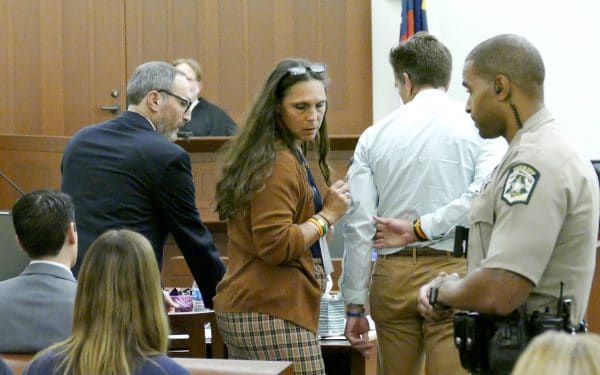 Parlier’s mother, Julie, addressed the court, breaking down in tears as she said: “We will never forgive him for his actions. The defendant wanted to kill someone? He should have turned the gun on himself. … May he rot in hell.”

The killer also briefly addressed the court, and briefly apologized for what he did: “If I could go back in time, I would back out of it. I am so sorry. I made a mistake.”

A couple hours before the court hearing Thursday, Pescaro tweeted: “For anyone who was not inside of Kennedy 236 between the time of 5:30PM — 6:00PM on April 30 and wants to TELL ME HOW TO FEEL, keep it to your self. You can’t feel what I feel and don’t try to tell me how to feel.” 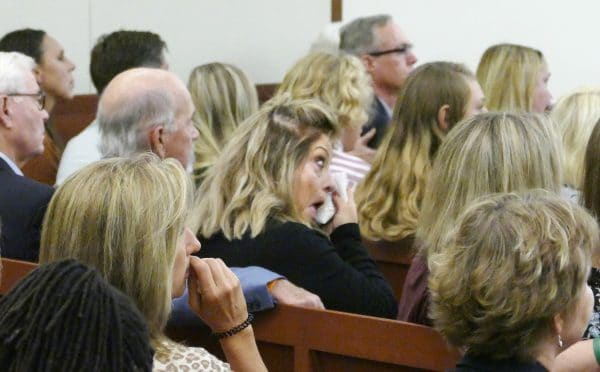 Tears were wiped as families talked about lost loved ones who died during an April shooting at UNC Charlotte by Trystan Terrell. Courtroom 5310 was packed with family, friends. (John D. Simmons/The Charlotte Observer/TNS)

Ahead of the hearing, Pescaro had tweeted criticism of the potential plea.

Former student body president Kristine Slade wrote on Twitter Wednesday that she agreed with Pescaro: “The judicial system has always been messed up, but this … a PLEA DEAL for committing a school shooting … is messed up on a new level.”

UNCC police said they were meeting to prepare for a Waka Flocka Flame concert to be held on campus that night when they learned of the shooting, the Charlotte Observer reported.

Terrell told police that he filmed the scene on his cellphone and spent months planning the attack, according to public search warrants from Charlotte-Mecklenburg police, Observer previously reported.

Terrell was found in the Kennedy Building classroom when police entered, late in the afternoon of April 30. After shots rang out, campus officials sent an alert urging those on campus to “Run, Hide, Fight. Secure yourself immediately.”

Hours after the shooting, UNCC Chancellor Phil Dubois called April 30 “the worst day in the history of UNC Charlotte.”

“This shakes us to our very core,” he said.

According to video taken at the university and eyewitness accounts, students and staff on campus were escorted out to safety with their hands in the air, as law enforcement went through campus room by room. At about 7:30 p.m., Charlotte-Mecklenburg police said that the “scene was secure” and that they had one person in custody.

Howell was hailed as a hero for knocking the shooter off his feet. He was posthumously awarded two of the military’s highest honors in his hometown of Waynesville — the Purple Heart and Bronze Star.

An Army ROTC cadet, Howell ‘’took the assailant off his feet,” preventing injury to more students, Charlotte-Mecklenburg Police Chief Kerr Putney said at a news conference the week of the shooting.

In June, survivor Pescaro posted an open letter on social media saying he was “sick and tired of all of the violence in this country,” McClatchy news group reported. He called for people nationwide to work toward change.

Pescaro was hospitalized for three weeks and later had to return to the hospital due to complications.

“Even on my worst of days it has become fully apparent that no matter what, light will always outshine the dark moments that occur in this world,” Pescaro posted.

And Houpt, despite her hospitalization for serious injuries, was able to walk across a stage in May to receive her degree in international studies.