Shiann Gill and Brian Mays of Cleveland pull out of Brook Park after a ceremony commemorating the upcoming 18th anniversary of the September 11 terrorist attacks. The observance at Kennedy Park Veterans Memorial was followed by hundreds of bikers proceeding through west side suburbs, their thundering journey reminding everyone never to forget those who perished during and in the aftermath of that tragic day. (Lynn Ischay/The Plain Dealer/TNS)
September 10, 2019 Lynn Ischay - The Plain Dealer
Share
Tweet
Flip

Ohio—Hundreds of shiny motorcycles line Sylvia Drive in Brook Park as the 3rd Battalion, 25th Regiment, 4th Marine Division color guard present the flags at Kennedy Park Veterans Memorial. The 3/25, as the unit is known, suffered heavy casualties in Iraq in 2005, losing 46 Marines and two Navy Corpsmen. The reserve unit was there to fight the global war on terror. On Sunday, the color guard honored those they lost, and to join the community in honoring all who were lost as a result of the September 11 attacks.

Charlie McGeever, a Red Cross worker who spent five months working at Ground Zero in New York City in the aftermath of September 11, takes the stage shortly after. He looks out over a sea of black clad bikers with leather vests and bandannas. The only sound is the wind until McGeever speaks. 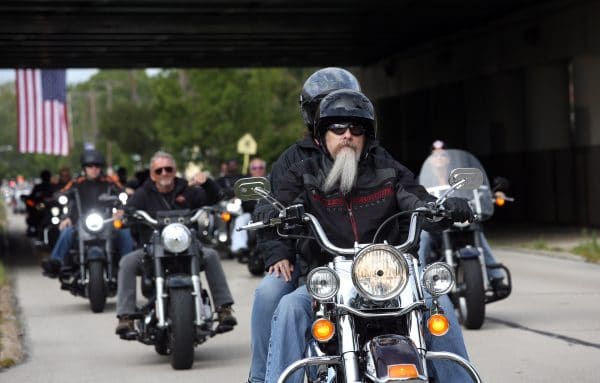 Hundreds of motorcyclists gathered at Kennedy Park Veterans Memorial in Brook Park to commemorate the 18th anniversary of the September 11th terrorist attack in which nearly 3,000 people were killed, an event that changed the country forever. Prayers were said, names were read and bikers rode from Brook Park to Lake Erie Harley Davidson in Avon, encouraging people to never forget. (Lynn Ischay/The Plain Dealer/TNS)

“I wish it was the day after 9/11,” he says. “Not because of the disaster, but because everyone came together.” Heads nod in agreement as McGeever continues, his voice shaking a bit. “Everyone loved one another. Nobody attacked the police. Everybody loved firefighters. So many of us have friends and family that were there. On Wednesday, check on those who suffer PTSD from that day. So many of us do.”

John Kikol, who organized the first September 11 memorial ride, is once again the man who keeps alive the memory of those nearly 3,000 people who died in New York city, Washington, D.C., and a field in Shanksville, Pennsylvania. He is passionate about those who serve, and who risk their lives daily to keep the rest of the country safe and free. He also organizes annual memorial rides for firefighters, police officers and the troops.

This year, Kikol wrote a poem and sent it to New York firefighters. Wearing a baseball cap that has 9-11-2001 stitched on the side and a NYFD patch on the front, he reads the poem to the crowd. One of the poignant lines, “Firefighters rushed in as many were running out. For many that morning, it would become their final chore,” causes many to stare at the ground. 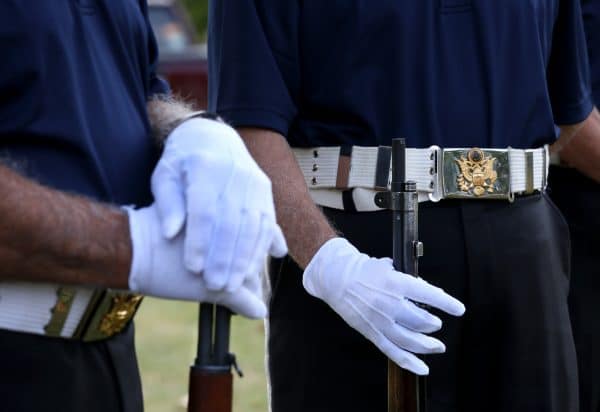 Members of Brook Park’s VFW Post 610 honor guard listen to the names of the 125 people killed in the Pentagon attack at a ceremony commemorating the 18th anniversary of the September 11 terrorist attacks. After a memorial, hundreds of motorcyclists had a procession through west side suburbs to Lake Erie Harley in Avon. (Lynn Ischay/The Plain Dealer/TNS)

Marine Captain Nate Stinson of Brook Park’s 3/25, in white hat and blue dress uniform, strides to the stage, assuring everyone in earshot that the Marines will always be there to protect.

With that, he begins to read the names of the people who were killed in the Pentagon attack. Afterward, the mournful notes of “Taps” from bugler Tony Gorgone of Brook Park VFW Post 610, “Amazing Grace” from the Cleveland Firefighters Memorial Pipes and drums, then the roar of hundreds of Harleys on the annual processional ride, through the streets of Brook Park, North Olmsted, Fairview Park, Westlake, Rocky River, Bay Village, Avon Lake and ending at Lake Erie Harley Davidson in Avon.

Reports: CIA informant who provided intel on Putin, Kremlin was extracted from Russia in 2017

Tent courthouses for migrants to open along Texas border