They wore full gear, air packs and helmets and crowded the stairwells of Charlotte’s second-tallest skyscraper.

More than 1,000 firefighters, police officers, paramedics and civilians climbed the 50 stories of the Duke Energy building twice on Saturday, then went back up another 10 floors.

The mission: Ensure nobody forgets the sacrifice made by those who died in New York’s World Trade Center on Sept. 11, 2001. Emergency workers from across the country participated in the 9/11 Memorial Stair Climb, which raises money for the National Fallen Firefighters Foundation. 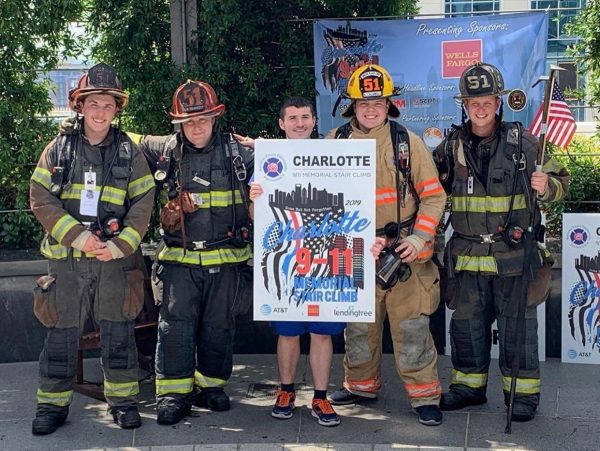 From left to right, Union Road Fire Department firefighters Cameron McCaslin, Jon Brackett, Noah Caldwell and Robert Heussy completed a 110-story climb Saturday to honor those who lost their lives on 9/11. [Robert Heussy/Special to The Gazette/TNS]

Among those in attendance was a contingent of Gaston County firefighters, eager to do their part to remember the fallen.

“The highest any firefighter made it on 9/11 was the 78th floor,” said Robert Heussy, a captain with the Union Road Fire Department. “We do 110 as a memorial. For me this means just honoring not only the 343 firefighters who died. It was the firemen going up the stairs, but it was symbolic of everyone who died.” 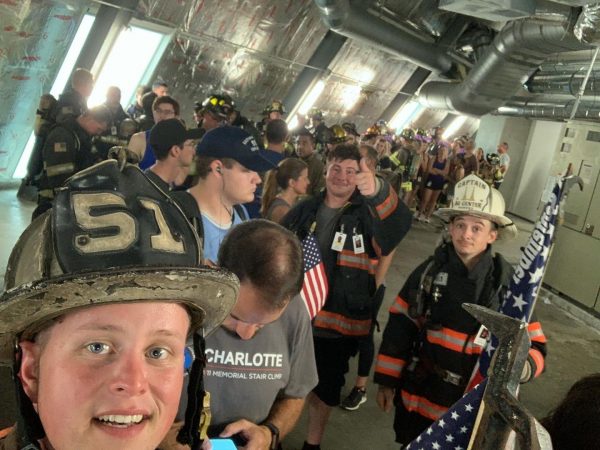 Robert Heussy (front) leads a team of people on a 110-story climb to honor those who died on Sept. 11, 2001. [Robert Heussy/Special to The Gazette/TNS]

Many of the participants wore full fire gear. Heussy also carried a tool firefighters use to pull down ceiling.

Saturday was the ninth time the Duke Energy building has hosted the event, and the third time Heussy has taken part.

It was a first-time experience for Agriculture Center Firefighter Travis Gibson, who was warned by others how exhausting the trek would be.

“I was going to wear full gear, but my chief told me it wasn’t a good idea with it being my first time,” said Gibson, who wore his coat and his helmet.

Gibson made it to the end, but says he “paid for” not training in advance. He plans to do it again next year to honor those who gave their lives.

“This is something we do to commemorate them,” Gibson said. “They’re gone but never forgotten. You can get a glimpse of what they did, except they knew when they were coming up that they weren’t going to be coming back down.”

Heussy sponsored the 10th floor through his Fireman’s Faith Ministry. He also led a team comprised of firefighters, paramedics, police officers and civilians.

“All these people had the same mindset,” Heussy said. “They wanted to do this for the people who were murdered on 9/11.”