Since 1955 when the Army began accepting Airmen into its school, nearly 300 Airmen across different AFSCs have earned the Ranger tab.  This week, Air Force 1st Lt. Chelsey Hibsch joined those ranks and became the first Air Force female Airman to earn the tab.  She pinned on her tab at the Army’s Ranger school graduation held at Fort Benning, Georgia.

The Army Ranger Course is one of the Army’s toughest leadership courses, with a concentration on small-unit tactics and combat leadership. The course seeks to develop proficiency in leading squad and platoon dismounted operations in an around-the-clock, all-climates and terrain atmosphere.  Only about half of those attending the Ranger School actually graduate.  All of the students go through rigorous challenges, learning more about themselves and their ability to persevere despite adversity. 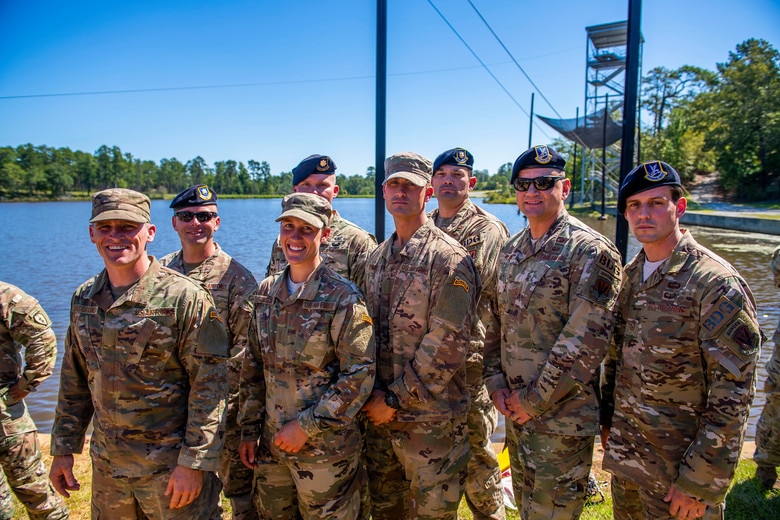 According to Sgt. 1st Class Jeremy Billings, Airborne Ranger and Training Brigade public affairs officer, there are three phases the students go through.  He said, “In the Ft. Benning phase, the students become trained on squad operations and focus on ambush and recon missions, patrol base operations, and planning before moving on to platoon operations. In the Mountain phase, students develop their skills at the platoon level in order to refine and complete their training in Swamp phase. After these three phases, Ranger Students are proficient in leading squad and platoon dismounted operations around the clock in all climates and terrain.”

Hibsch, a former enlisted Airman, qualified for a slot in the course by attending the Air Force’s Ranger Assessment Course (RAC) hosted by the Air Force Security Forces Center, then further improved her skills with the Tropic Lightning Academy in Schofield Barracks, Hawaii.  RAC is based on the Ranger Assessment Phase week and the first two weeks of the Army Ranger Course.

Lt. Col. Sorensen, Air Force Security Forces Center chief of training and Ranger qualified himself, said of Hibsch and the course, “Ranger school is truly not for the weak or faint of heart. It speaks well of all those who persevere to find that inner grit and motivation to push through all that Ranger school throws at them.” He further stated, “The perspective tabbed Airmen earn serves them well when the mission gets challenging and others look to them to find a way.”

When Hibsch was in the RAC, she talked about how it was “an unmatched learning experience on leadership and followership.”  The instructors provide RAC as a stress-oriented battle course for Airmen to develop better leadership and command tools under the mental, emotional and physical strain and improve their resiliency and coping mechanisms to better prepare them for the rigors of Ranger school.  She told of how lessons learned in RAC could apply to Ranger school because she had an “understanding of how you function when you’re hungry, tired, wet, cold, and worse, then you have to lead a team of individuals feeling the exact same way.  You really find out a lot about your team mates and yourself in these stressful situations.”

Hibsch will take her leadership training to a new organization, acting as a flight commander in the 821st Contingency Response Support Squadron at of Travis AFB, California, which provided support to Tyndall AFB, Florida, after Hurricane Michael wreaked havoc on that installation last year.  Her previous assignment was with the 374th Security Forces Squadron at Yokota Air Base, Japan.  She led PACAF’s 2018 Defender Challenge Team to six event trophies and the overall Defender Challenge Championship.