NEW YORK (May 28, 2019) USS New York (LPD 21) sends a special message to New York City by spelling out “I ♥ NY” on the ship’s flight deck at the conclusion of 2019 Fleet Week New York (FWNY), May 28. FWNY, now in its 31st year, is the city's time-honored celebration of the sea services. It is an unparalleled opportunity for the citizens of New York and the surrounding tri-state area to meet Sailors, Marines and Coast Guardsmen, as well as witness firsthand the latest capabilities of today's maritime services. (U.S. Navy photo by Chief Mass Communication Specialist Roger S. Duncan/Released)
September 11, 2019 Kyle Perisic
Share
Tweet
Flip

For sailors aboard the USS New York, the terrorist attacks on Sept. 11, 2001, are more than just a memory, but every year they pay their respects to the victims and heroes of that fateful day like any other American.

The USS New York (LPD-21), is a permanent memorial of the attacks in New York — her nose is made from steel recovered from the World Trade Center believed to be from the south tower, forging an enduring alliance between her and the people of New York.

Additionally, one of the most-used passageways displays a steel plate from Trade Center rubble and a firefighter’s helmet reminds sailors of the first responders who sprung into action and gave their lives.

Ready to fight in the ongoing counter-terror efforts, the USS New York is much faster and more agile than previous incarnations. She cruises significantly faster and her waterline is 111 feet longer than the long-ago decommissioned battleship USS New York, a BB-34.

Certified in November 2009, the USS New York had a very successful first year in commission, helping in the fight against America’s enemies using the same steel they destroyed. 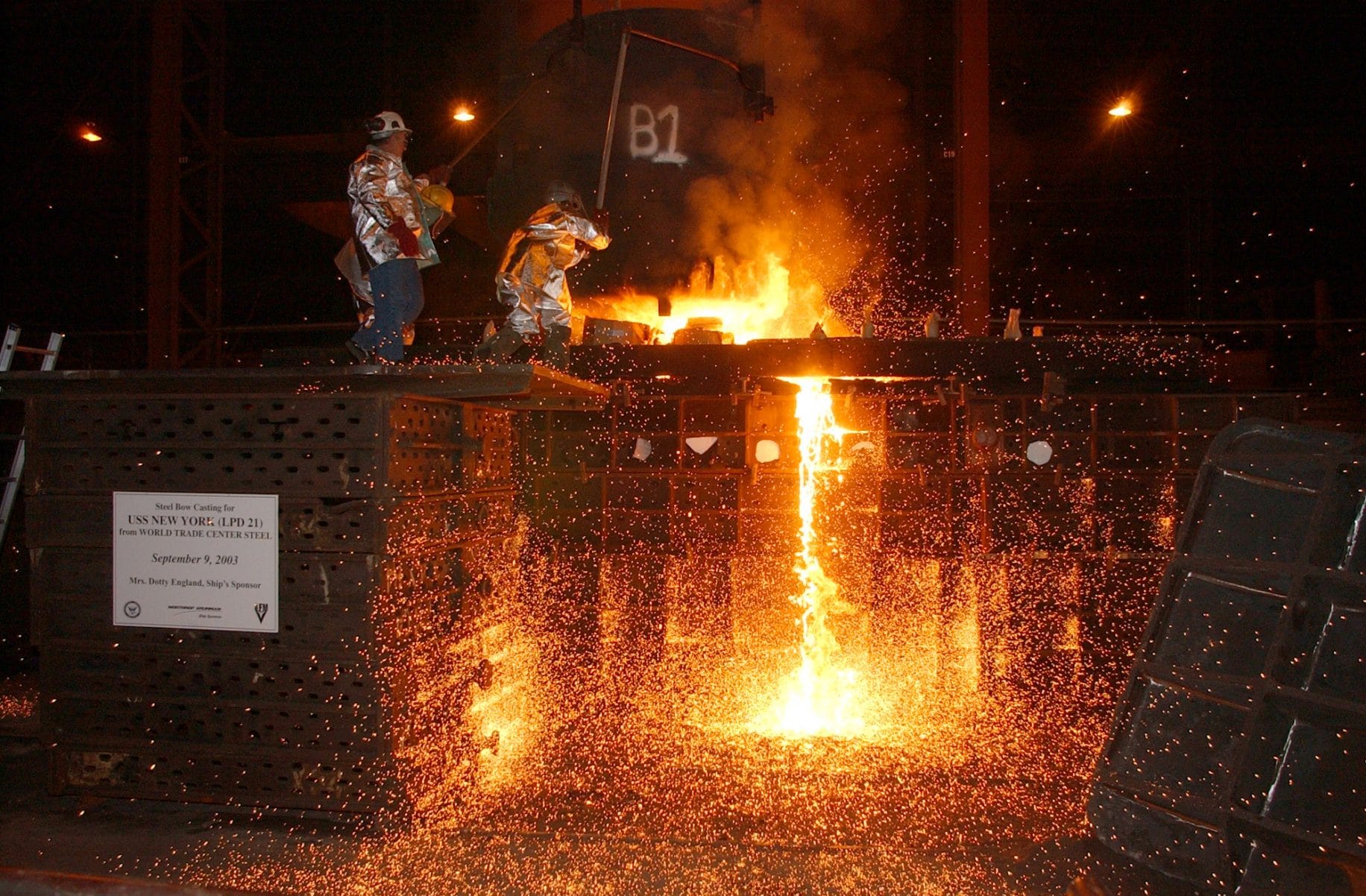 Amite, La. (Sept. 10, 2003) — Workers pour steel, recycled from the World Trade Center, into a mold, which will form the bow stem of the Amphibious Transport Dock ship USS New York (LPD 21) at the Amite Foundry. About 24 tons of steel was salvaged from the World Trade Center, which was destroyed in the terrorist attacks of Sept. 11, 2001. Approximately 10-percent of the steel was lost when the foundry superheated the 48,780 pounds of steel to 2,850 degrees Fahrenheit. (Photographer’s Mate 2nd Class George Trian/U.S. Navy)

She was underway for three months in the spring of 2010, supporting the Marines, Army and Navy SEALs as well as supporting gunnery and missile exercises.

Her Maiden Deployment came on March 26, 2012, as part of the Iwo Jima Amphibious Ready Group (ARG) manned, trained and equipped to perform the full range of MEU/ARG missions, and has boasted quite a career since then.

In June 2014, just days after returning to Mayport, she was surge-deployed, given only 48 hours notice, to support a classified high-priority counter terrorism mission with a Special Operations Task Force and completed it successfully.

So, while remembering 9/11 is an annual day of recognition for civilians on the mainland, the sailors aboard this unique ship remember it every time they set their eyes on her nose or walk down a passageway.

For sailors, daily prayers aboard the ship are longer and the chaplain dedicates each prayer to a victim of the attacks. It all makes forgetting the terrorist attacks impossible.