The U.S. Coast Guard was involved in a massive rescue operation Monday morning after a 75-foot commercial diving boat caught fire off the coast of Ventura County, trapping dozens of people.More than 30 people were missing and officials said some died. Many on the boat, which was off Santa Cruz Island, were believed to be sleeping below deck when the fire broke out and appear to have been trapped. (Photo courtesy Ventura County Fire Dept/TNS.)
September 03, 2019 Dakota Smith - Los Angeles Times, Los Angeles Times - Brittny Mejia, Louis Sahagun - Los Angeles Times and Laura J Nelson - Los Angeles Times
Share
Tweet
Flip

Coast Guard officials said late Monday that the bodies of at least 15 people have been found after a 75-foot commercial diving boat erupted in flames near the shoreline of Santa Cruz Island.

Many aboard the vessel Conception were thought to be sleeping below deck when the fire broke out in the predawn hours. Authorities continued their search Monday for possible survivors as the Santa Barbara County Sheriff’s coroner office prepared for a mass casualty incident. 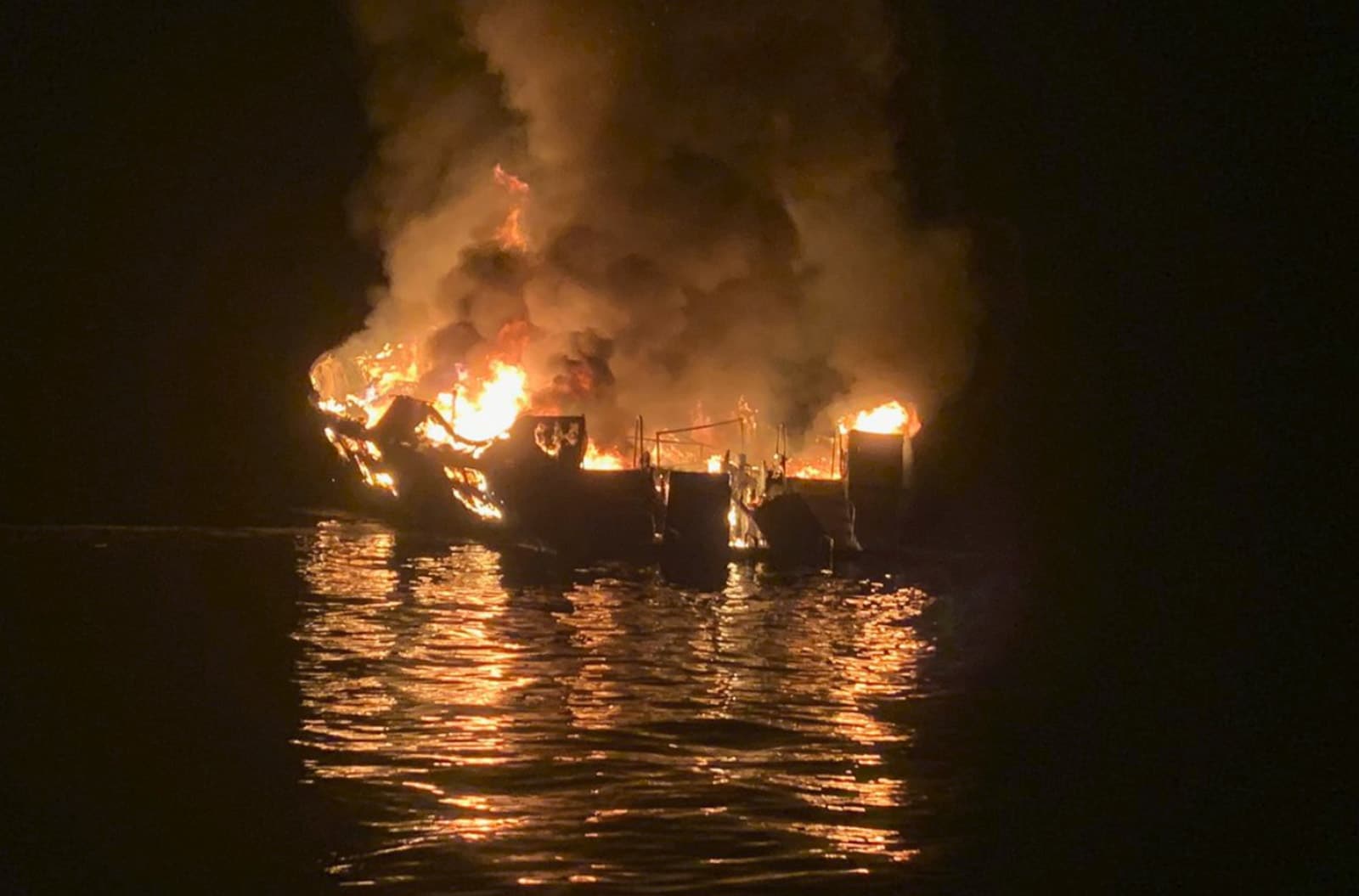 “This isn’t a day we wanted to wake up to for Labor Day and it’s a very tragic event,” said Coast Guard Capt. Monica Rochester. “I think we should all be prepared to move into the worst outcome.”

Five crew members were already awake when the fire erupted and jumped off the boat, which was 20 yards off shore of the north side of Santa Cruz Island near the Ventura County coast, Rochester said. One crew member remains unaccounted for. 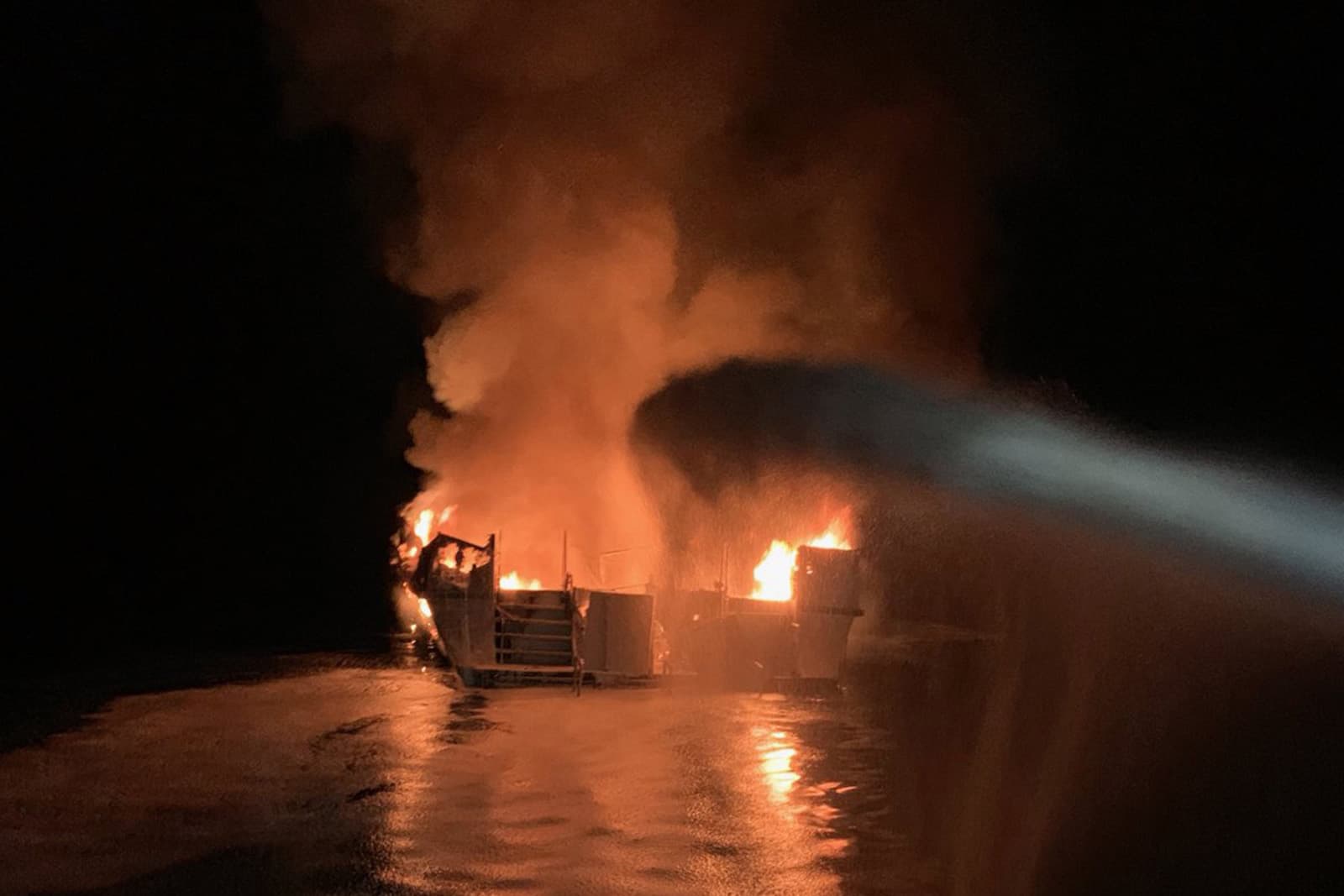 “Our hearts go out to the families of the victims of this terrible tragedy,” Santa Barbara County Sheriff Bill Brown said. “We understand the tremendous burden they are under right now.”

Around 3:15 a.m. PDT, Coast Guard Sector Los Angeles-Long Beach watchstanders overheard a mayday call of the boat on fire, according to the agency. 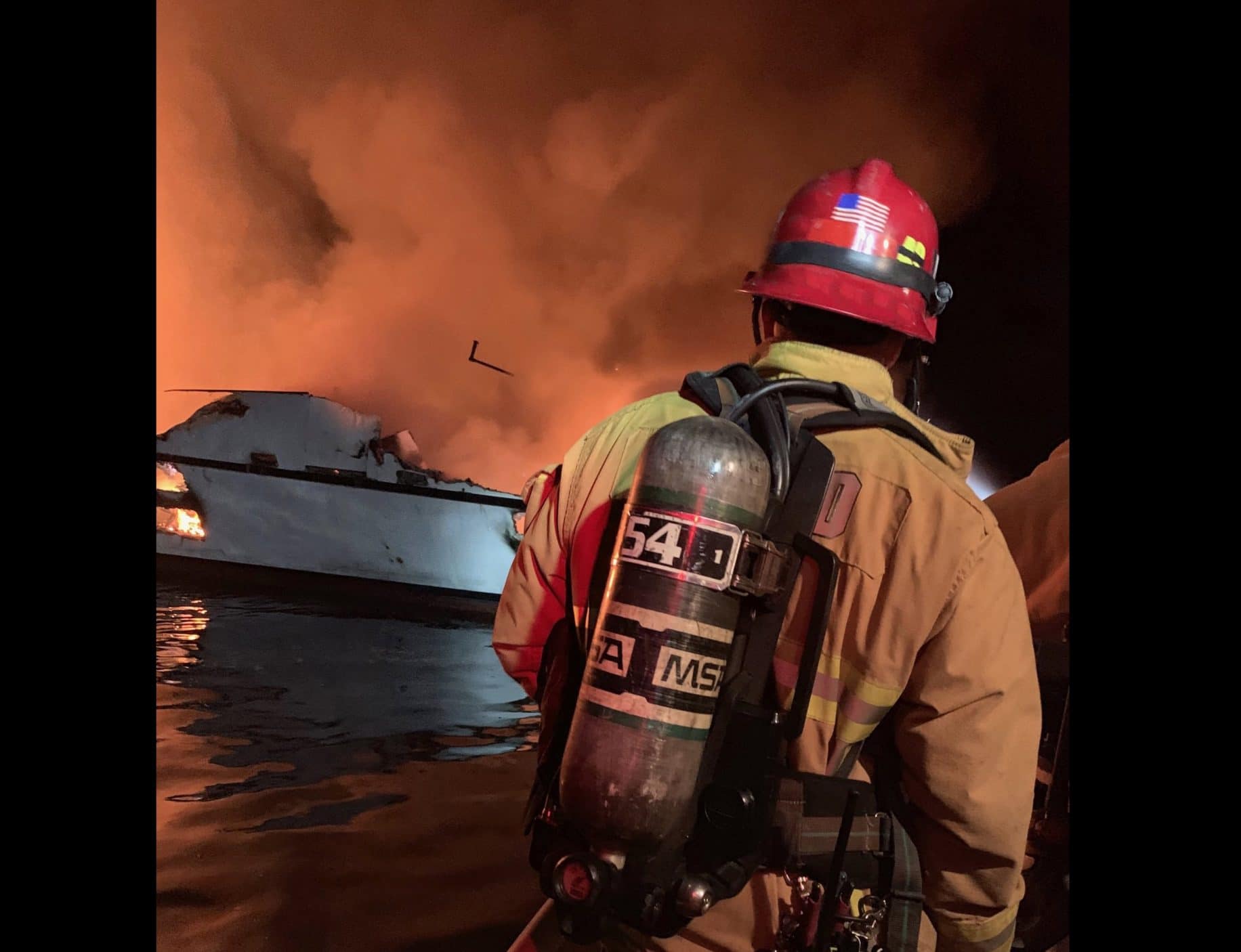 In the garbled emergency call, a man says there are 39 people aboard.

The five crew members, two with leg injuries, were rescued by a good Samaritan boat, the Grape Escape, according to the agency.

“You can imagine that of all the scenarios, to be in a remote location, have a fire that occurs, have limited, if any, firefighting capabilities … and to have all of a sudden a fire that spread very, very rapidly — you couldn’t ask for a worse situation,” Brown said.

Shirley Hansen and her husband, Bob, were jarred awake about 3:30 a.m. by the sound of pounding on the side of their 60-foot fishing boat.

The crew had escaped the Conception by jumping into the ocean, retrieving a dinghy and paddling 200 yards to the Hansens’ boat, the Grape Escape, Shirley Hansen said in an interview.

The crew was distraught, some wearing only underwear, she said. One man told the Hansens that his girlfriend was still below deck on the Conception. Another man cried, describing how they had celebrated three passengers’ birthdays hours earlier, including that of a 17-year-old girl who was on the diving trip with her parents.

Shirley Hansen said she could see the Conception ablaze from her boat and said there was so much smoke that she had to use an inhaler.

As the Hansens handed out blankets and clothes to the crew, two of the men got back into the dinghy to see if anyone else had jumped overboard.

“But they came back and there was no one that they found,” Shirley Hansen said.

As the fog lifted Monday at 2 p.m., at least three rescue vessels were at sea near the sunken dive boat, located in a remote cove at the northernmost end of Santa Cruz Island.

In the shadow of Santa Cruz Island’s headlands and rocky fingers a small craft had raised a red-and-white striped flag indicating that there were divers in the water.

Nearby, a Coast Guard cutter sliced through the water, warding off all non-rescue boat traffic: “The captain has extended the security zone to 1 mile.”

Kristy Finstad, 41, was helping to lead the Labor Day excursion on the Conception. Hours after the disaster, Finstad’s family had not heard from their daughter, a marine biologist who worked for the family company, Worldwide Diving Adventures.

“They’ve been searching for a long time now,” said her brother, Brett Harmeling, 31. “She’s extremely strong-willed and very adventurous. If there was a 1% chance of her making it, she would have made it.”

Finstad’s mother founded Worldwide Diving Adventures in 1972, and Finstad grew up with a love of the ocean and of marine life. She studied marine biology at the University of California, Santa Cruz and held multiple jobs related to marine life and the ocean, including performing research dives for the Australian Institute of Marine Science and writing a restoration guidebook for the California Coastal Commission.

“She has an extraordinary depth of knowledge,” Harmeling said. “Every time I’m on a dive trip with her, she goes above and beyond. She’ll go underwater and point out something, and then after the dive, she’ll explain exactly what it was and why it’s important.”

Authorities have set up a family assistance center at Earl Warren Showgrounds in Santa Barbara. A family information line has been opened at (833) 688-5551.

The boat departed from its base in Santa Barbara Harbor on Saturday morning and was scheduled for a three-day trip.

Truth Aquatics, the company that owns Conception, is a respected name in the diving world, running several boats off the Channel Islands. Owner Glen Fritzler won the California Scuba Service Award earlier this year for his pioneering work in the industry.

According to California Diving News, Fritzler built the Conception in 1981 and it was a major part of his life and business.

Fritzler told the paper his firm’s boats have hosted more than 450,000 divers and more than 1 million dives.

Truth Aquatics would not comment Monday morning. A person who answered the phone said they were waiting for official word from the Coast Guard and needed to keep their lines clear.

Ralph Clevenger, a photographer who regularly takes pictures of expeditions for Truth Aquatics, has been on hundreds of diving trips with the company since the ’90s.

Jerry Boylan is usually the captain of the Conception, Clevenger said, although he doesn’t know if Boylan manned the vessel during the Labor Day trip. He noted that Boylan is a top-notch captain who has been with Truth Aquatics longer than anyone else, other than the company’s owner.

“It’s a position where if you’re not good with people and your crew, and operating the boat, you just don’t last,” Clevenger said.

Rochester said the vessel is inspected annually by the Coast Guard and has been in regulatory compliance.

“We are working deliberately with the vessel owner operator, who is with us at this time, working on a plan to conduct further assistance for his vessel,” Rochester said.

Bruce Rausch, a veteran dive master in Orange County and a retired San Onofre nuclear design engineer, said he has been on diving trips aboard the Conception more than a dozen times.

Before any guest begins a dive, Rausch said, the ship’s first captain completes an extensive safety briefing that covers the location of life jackets, deploying life boats, and the location of two bunk room exits, a ladder at the bow end and an escape hatch toward the stern. The briefing also discusses the alarms on board, as well as underwater alarms and notes the location of fire extinguishers.

The safety briefing, Rausch said, is done within the galley at the site of the escape hatch, a roughly two-feet by two-feet square plank of wood with no lock or latch on it. Below, the rows of bunks hold a maximum of 46 people, some in single or double beds stacked in threes.

Members of the tight-knit scuba diving community expressed grief over the tragedy on social media.

“The boat, owners, Captain and crew have always been exemplary and have kept us safe and returned us back to the dock,” according to a post from San Luis Obispo dive shop SLO Ocean Currents on Facebook on Monday morning. “It is a humbling day and a reminder to make every day count.”

U.S. Rep. Julia Brownley, D-Calif., said she had been planning to go to a Labor Day parade when she heard news of the boating accident.

“Devastating. Tragic. And we’re hoping there could still be some survivors,” said Brownley, after being briefed by the Coast Guard in Oxnard.

Gov. Gavin Newsom also shared a statement on Twitter regarding the fire.

“Our hearts are with the families and loved ones affected by this tragic incident. As we wait to hear more, we are eternally grateful for our heroic first responders that are on site — working to ensure every individual is found.”