Lonnie Cook, a former sailor who was aboard the battleship USS Arizona during the Dec. 7, 1941 Japanese attack on Pearl Harbor, reads the names of his lost shipmates on the USS Arizona Memorial. The monument is hosting ceremonies throughout the week leading up to Pearl Harbor Day in remembrance of the attack.(Photo by: Mass Communication Specialist 3rd Class Dustin W. Sisco)
August 02, 2019 William Cole - Honolulu Star-Advertiser
Share
Tweet
Flip

Of the 337 men who survived a massive explosion on the USS Arizona on Dec. 7, 1941, just four remain alive following the death Wednesday of Lonnie Cook, who was 98.

When word spread of the Japanese attack, Cook was heading up from the bowels of gun turret 3 on the stern of the ship — the mount for which is still visible above the waters of Pearl Harbor.

He was halfway to the big 14-inch guns when a 1,760-pound aerial bomb blew off the bow of the Arizona and a fireball raced through the battleship, knocking out the lights.

Up in the gun room, meanwhile, it was so smoky “you could hardly breathe,” Cook recalled in a 2012 video. Others “figured the Japanese were gassing us,” but it was the devastation below decks that was the cause.

When the attack quieted a bit, Cook went out on the starboard quarterdeck and helped wounded crew who were in white shorts and T-shirts on that Sunday morning.

“Some people coming out of there were burned so bad you’d catch a hold of them and skin would slip off and the other arm might be burned crisp,” Cook said.

A total of 1,177 men died on the Arizona, and over 900 remain entombed on the battleship grave and memorial.

Cook, who lived in Oklahoma most of his life but had moved to California last year, didn’t come out to Pearl Harbor commemorations in recent years. But as time passed he became part of a dwindling group of survivors whose actions were increasingly highlighted by the press. 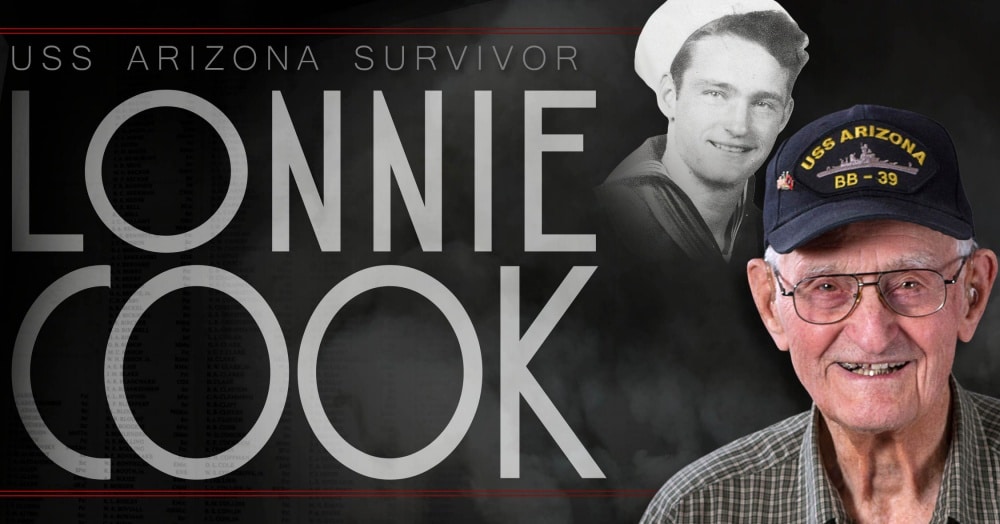 “Those that escaped from the ship became this kind of fraternity of history,” said Daniel Martinez, chief historian for the Pearl Harbor National Memorial. “It bonded them together like in no other time.”

Turrets 3 and 4 were the only ones in which men came out alive, he said.

“I think what’s remarkable about (Cook) is he found himself in a world that was completely now dark,” Martinez said. “They were in the turret — that was their battle station. All the men reported to the turret, (which) is like a being in a four-story building. There are all different levels that go all the way down” in the ship.

Cook recalled in the 2012 interview that he had won $60 in a craps game the night before. He had liberty that Sunday and was going to take a fellow gun crew member out on the town in Honolulu.

The beginning of the end for the USS Arizona began when Cook “heard some rumbling going on” and another crew member announced the Japanese were attacking.

Nearly 78 years later Don Stratton, Lauren Bruner, Lou Conter and Ken Potts are the only crew who remain from the battleship.

Time is now rapidly running out for all World War II veterans. Everett Hyland, a Pearl Harbor defender and well-known volunteer at the USS Arizona Memorial visitor center — one of just two regulars who remained — died July 23 at age 96.

On Dec. 7, 1941, Hyland was a crew member of the battleship USS Pennsylvania, the flagship of the Pacific Fleet, and was badly wounded by an aerial bomb.

In some cases, famous units from World War II have no living members. Dick Cole, the last of the Doolittle Raiders, died April 9 at age 103. Cole was Lt. Col. Jimmy Doolittle’s co-pilot on a daring April 18, 1942, bomber strike against Tokyo four months after Pearl Harbor.

Sons and daughters, museums and authors increasingly have to tell the story, Martinez said.

“I think that where we are is where the generations of the 1930s and 1940s prior to the war were, seeing the last Civil War veterans die and now books were being written about that experience,” he said. “The ownership of the story is now passed on to the scholars.”