President Donald Trump talks on the phone aboard Air Force One during a flight to Philadelphia, Pennsylvania, to address a joint gathering of House and Senate Republicans, Thursday, January 26, 2017. This was the President’s first trip aboard Air Force One. (Shealah Craighead/White House)
August 01, 2019 Radio Free Europe/Radio Liberty
Share
Tweet
Flip

Trump called Russian President Vladimir Putin to make the offer, the Kremlin said on its website.

Putin expressed his “sincere gratitude” to Trump for the concern and said he may accept the offer if the situation demands it.

Forest fires have been raging for several days across vast areas of Siberia, forcing thousands of people to evacuate. Russia has declared a national emergency in five Siberian regions and deployed the military to help battle the blazes.

Putin highlighted the call by Trump as a guarantee that the United States and Russia will someday be able to restore full relations. The two leaders agreed to continue to speak by phone and meet in person.

The phone call came two days ahead of the official U.S. withdrawal from the 1987 Intermediate-Range Nuclear Forces (INF) Treaty with Russia.

Since coming to power in 2017, Trump has sought to improve ties and build a close working relationship with Putin against the will of Congress, his intelligence community, and many members of his own administration.

U.S. relations with Russia have deteriorated to their lowest levels since the end of the Cold War after the Kremlin annexed Ukraine’s Crimean Peninsula in 2014, backed separatist fighters in the Donbas, and interfered in the 2016 U.S. presidential election.

Trump has been heavily criticized following his one-on-one meetings with Putin for not challenging the Russian leader on his actions in places like Ukraine and Syria as well as his government’s interference in U.S. elections.

The two last met at the Group of Eight summit in Osaka, Japan in June.

Putin did not specify what help Trump offered in battling the blaze.

The fires in Siberia were sparked by dry thunderstorms as temperatures rose above 30 degrees Celsius and were spread by strong winds, Russia’s federal forestry agency said. 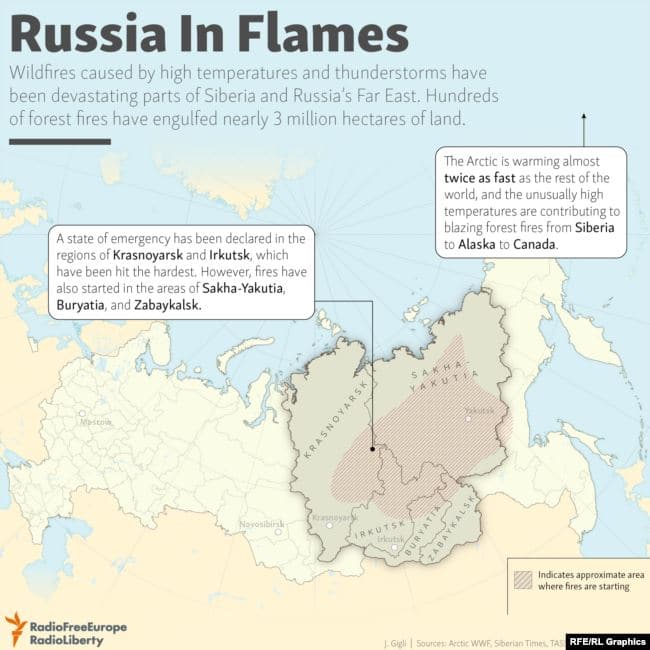 The sheer scale of the blazes could accelerate global warming and have immediate effects on the health of inhabitants, environmentalists have warned.

Around 3 million hectares of land in the center and east of the country were ablaze on July 31, authorities said.

The smoke has disrupted air travel and descended upon major cities in western Siberia and the Altai region, as well as in cities in the Urals, including Chelyabinsk and Yekaterinburg.

“After reviewing a report from the emergency situations minister, President Putin instructed the Defense Ministry to join the effort to extinguish the fires,” the Kremlin’s press service said.

Some 2,700 firefighters were already working to tackle the blazes, Interfax news agency reported.

Ten planes and 10 helicopters have been dispatched to the Krasnoyarsk region, one of the worst affected, the military said.

The press service said the armed forces in the Irkutsk region, also badly hit, had been put on high alert.

Prime Minister Dmitry Medvedev, who visited the city of Krasnoyarsk on July 31, said Russia could “hold consultations” with Western countries such as the United States on how to better fight the fires.

“These fires are raging in Alaska on an enormous scale. Europe has them all the time — they too have scientific approaches to them. Hold consultations [with them] — I believe it really cannot hurt in this situation,” Medvedev said.

According to the Russian branch of environmental group Greenpeace, almost 12 million hectares of forest have been burnt this year — causing significant carbon dioxide emissions and reducing the future capacity of forest to absorb the carbon dioxide.

Greenpeace spokesman Grigory Kuksin told the Ekho Moskvy radio station that deploying army units to the forest could do more harm to the operation than good.