Justin Rowland begins to remove the vest from his service dog, Mac, so that he can go inside at their Carrollton home on Tuesday, Aug. 20, 2019, Saginaw, MI (MLive.com/Rachel Ellis/TNS)
August 26, 2019 Isis Simpson-Mersha - MLive.com
Share
Tweet
Flip

U.S. Marine Corps Reserve veteran Justin Rowland knew he wasn’t feeling quite right after serving in the military for nearly a decade and then working as a police officer.

He felt anxious and depressed, but he buried those feelings and continued to live life as if nothing was wrong – until he couldn’t anymore.

“I suffered from anxiety and depression, the gamut of things – hopelessness and lack of self worth. I finally got myself in therapy,” Rowland said. 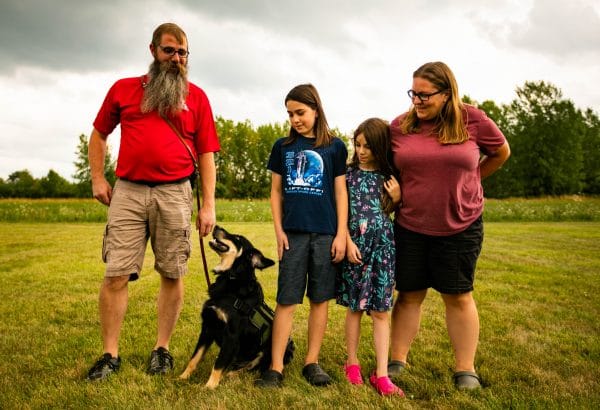 The Rowland family, from left, Justin, Mac the service dog, Wesson, 10, Mara, 8, and Lori pose for a photo together outside of their Carrollton home on Tuesday, Aug. 20, 2019, Saginaw, MI. (MLive.com/Rachel Ellis/TNS)

Therapy allowed Rowland, a 38-year-old father of two, to think through his negative thoughts and feelings. He discovered they stemmed from post traumatic stress disorder.

Eventually, a conversation with a counselor at the Aleda E. Lutz Medical Center in Saginaw about getting a service dog for him led Rowland to Mac, a gentle but protective mixed-breed puppy with a black coat and brown markings.

Rowland met Mac though a national nonprofit organization called K9s For Warriors, which provides service dogs to veterans who need them for emotional support. Rowland traveled to the organization’s headquarters in Ponte Vedra, Florida, to train for three weeks with a Mac.

During that time, Rowland bonded with Mac, learned commands, figured out how the dog was going to help him and how to groom and take care of a canine.

“He gets me out more,” Rowland said. “He makes me more social and also more visible.”

Rowland, who lives with his family in Carrollton Township, enlisted in the Marine Corps Reserve straight out of high school in 1998.

“I got out as a sergeant. I was a combat engineer,” he said. “I was reserves in Battle Creek, Michigan. We’re a bridge company. We did primarily bridging, but as engineers, we’re kind of a jack of all trades. We do demolitions, landmine warfare, bridging, construction and we kind of double as anything else.”

Today, Rowland proudly sports a well-groomed, long beard, a hairstyle he didn’t get to have after leaving the service and becoming a police officer in Lexington, Kentucky. In that job, Rowland said he developed foot issues and at some point tore his Achilles tendon, which forced him into an early retirement. 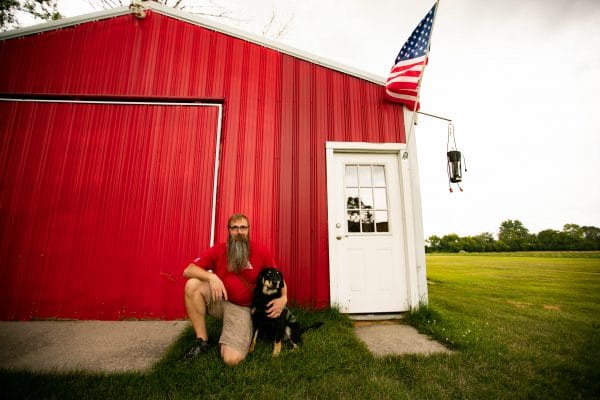 Justin Rowland poses for a photo with his service dog, Mac, in the backyard near their barn at his Carrollton home on Tuesday, Aug. 20, 2019, Saginaw, MI. (MLive.com/Rachel Ellis/TNS)

Once Rowland lost his career, his negative emotions began to surface, he said.

“It’s something that I have struggled with for a long, long time. I was a police officer so I really couldn’t show it or acknowledge it. I didn’t really recognize what it was for a long time. I just knew that I had something in me that was wrong. I had to just kind of push on for my family because I didn’t want to risk my career,” he said.

Rowland said his new service dog has made him more approachable because people are drawn to Mac and it gives Rowland an opportunity to talk to people.

“He makes me feel better about life in general,” Rowland said. “He senses when I’m not having a good day, he comes up and makes me pay attention to him. He takes my mind off of me and puts it on to him.”

“There’s an epidemic of veteran suicide in our country,” Diamond said. “Service dogs are a proven method of alleviating the debilitating symptoms of PTSD – like suicidal ideation. They not only get our veterans back on their feet, but they also help them regain a sense of normalcy in their lives. Most veterans with PTSD think they’ve lost that forever.”

Rowland returned from training with Mac in June and since then, the dog has bonded with the rest of the Rowland’s family, including Lori, and his kids Wesson,10, and Mara, 8.

“If there are veterans out there who are struggling, they should consider something like this. If a dog is for you – a dog is not for everybody,” Rowland said.

In Rowland’s and Mac’s spare time, you might catch them on a cycling journey, exploring the family’s land in the back yard of their home or opening up to strangers who are drawn to a furry companion.