The 1st Battalion, 145th Armored Regiment, which is based in Stow, fills part of the Canton Memorial Civic Center on Sunday afternoon during an offficial call-of-duty ceremony. The regiment is gearing up for a deployment to the Middle East. (GateHouse Media Ohio correspondent / Bob Rossiter/TNS)
August 26, 2019 Steven M Grazier -The Repository
Share
Tweet
Flip

First-time father and 1st Lt. Zachary Ellifritz was one of hundreds of Ohio National Guard troops spending the final hours with family Sunday afternoon, prior to leaving for a major troop deployment scheduled later this week.

Ellifritz, of Pemberville, was hanging close to his wife, Jessica, while holding his 13-day-old daughter, Rylie Lauren, who was tucked between his right arm and chest. He stood tall — appearing proud to serve his country — while managing emotions as the family’s first, long-term goodbye approaches. 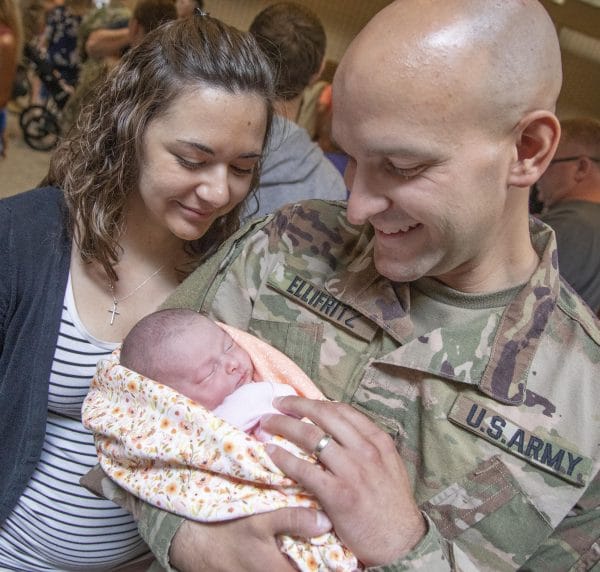 “It’s tough, but you sign up for a reason,” the lieutenant said. “You understand the sacrifice (time away from family).”

Jessica Ellifritz said the couple found out two to three months into her pregnancy that her husband, a maintenance control officer who will command 23 troops, would be leaving this summer for a year-long stint in the Middle East in support of Operation Spartan Shield.

“It was a little bit of a shock; finding out so much (in a short time),” she recalled.

Approximately 580 troops assigned to the National Guard’s 1st Battalion, 145th Armored Regiment, are heading for the Middle East. Most of the soldiers assigned to the Stow-based cadre are from Ohio and specialize in working with armored tanks or as combat infantrymen.

The soldiers were joined Sunday by family members, friends and coworkers for a roughly 90-minute call-to-duty ceremony at the Canton Memorial Civic Center, which aimed to rally the regiment and thank them and their families for their service and commitment. About 4,500 people attended the going-away event, which included guest speakers and music provided by the Ohio National Guard Army Band. 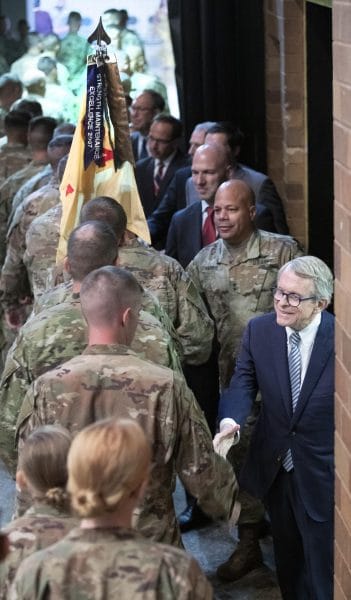 Lt. Ellifritz said he knows he’s likely to be overseas for some key parts of his daughter’s life, such as babbling and laughing, tasting solid food, crawling and perhaps her first steps.

“I’m going to miss out on those firsts. It won’t be easy,” said Ellifritz, adding that he’ll make time to connect with his family via the internet and write plenty of letters by hand.

On Tuesday or Wednesday, the bulk of the soldiers will be en route to Texas for readiness training, which includes mission briefings and processing paperwork and orders. They are to depart overseas not long after that.

Recently wed Alex and Alyssa Chmidling will deploy together for the first time. The couple, who married about 18 months ago, are from the Dayton area. They said they may not get to spend too much time in each other’s presence, as Alex works as a tank gunner and Alyssa as a cook.

Alex laughed when asked if seeing his wife work the chow line might be the highlight of some days.

“We’ll see how that goes,” he said with a chuckle.

Alyssa Chmindling said the couple is looking forward to adding to their scrapbook during the yearlong deployment.

“We already collect sand and rocks from wherever we go,” she said. “This will add to that.” 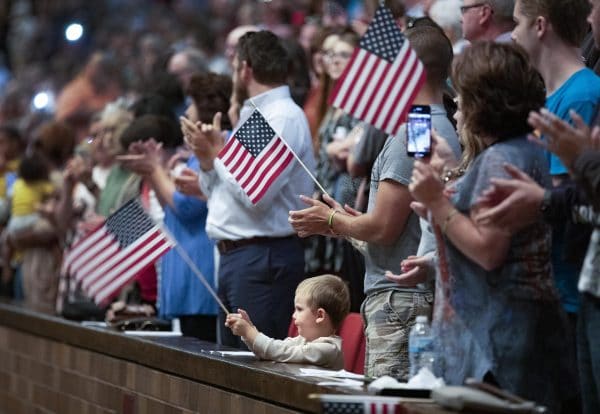 Ohio Gov. Mike DeWine and Maj. Gen. John C. Harris Jr., the Ohio adjutant general, offered words of encouragement during the Sunday ceremony. They were among a contingent of distinguished guests that included U.S. Rep. Anthony Gonzales, Secretary of State Frank LaRose, Lt. Col. Jonathan Stewart, commander of the 145th regiment, and others.

“We’re here to thank the men and women, and their families,” DeWine told The Independent prior to the event. “When you see the families … and meet them, it drives home the sacrifices they’re making.”

The bulk of the part-time, National Guard members have full-time civilian jobs when they’re not on military duty. Many work as teachers, managers, machinists, steel workers, medical professionals, police officers and firefighters.

During their overseas deployment, soldiers of the regiment will be part of the 30th Armored Brigade Combat Team, comprising 4,200 National Guard members from Ohio, West Virginia, North Carolina and South Carolina.

“You are one of the most formidable fighting forces on the planet,” said Harris during his remarks to the squad.”We’re honored to have you on our side.”

Part of the regiment’s duty will be to help train military allies in the Middle East, Harris said.

“You represent us to the rest of the world,” he added.

For many soldiers, the deployment is their first overseas mission, according to Stewart.

“We are all Ohio soldiers, and put the needs of others ahead of our own,” the colonel said.

In 2009, about 450 members of the 145th regiment returned from a yearlong deployment as part of an international peacekeeping mission in the Sinai.

The governor noted that he is looking ahead to the regiment’s return to Ohio.

“We look forward in about a year to greet you all when you come back,” he said.