Retired Air Force Col. Eric Nelson, former commander of the 455th Expeditionary Operations Group and the 4th Operations Group, is greeted after his final F-15E Strike Eagle flight at Bagram Air Base in Afghanistan in 2007. Nelson was diagnosed with late stage aggressive prostate cancer three months after retiring in 2011. He is still fighting a return of the cancer. Nelson is advocating for the military to begin screening its younger flight officers, who Nelson and other pilots say are at increased risk for the disease. (Staff Sgt. Joshua Jasper/U.S. Air Force/TNS)
August 31, 2019 Tara Copp - McClatchy Washington Bureau
Share
Tweet
Flip

The Department of Veterans Affairs will take the lead on improving access to medical care for military members exposed to potentially cancer-causing compounds during their service, Defense Secretary Mark Esper told reporters Wednesday.

In response to a question from McClatchy on the rising number of cancers in the military that could be connected to compounds service members were exposed to while deployed overseas or during training, Esper acknowledged the role of both the Pentagon and VA may grow.

“That is one of the areas where I want to improve and make sure we are doing everything we can to assist soldiers, sailors, airmen and Marines as they transition out of the service into the VA system,” Esper said. 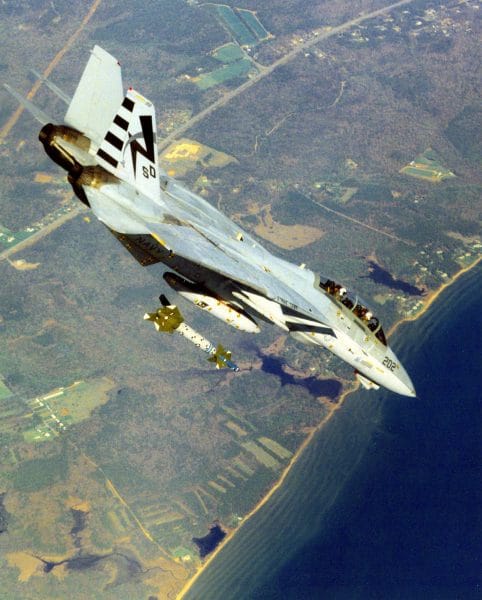 A U.S. Navy F-14A Tomcat releases a GBU-24B/B Hard Target Penetrator Laser-Guided Bomb while in a in a 45-degree dive during ordnance separation testing on May 10, 1996 at Naval Air Station Patuxent River, Maryland. (Vernon Pugh/Department of Defense/TNS)

Earlier this year, the military service organization TAPS said that the top cause driving new survivors to join its organization will soon be military member cancer deaths. TAPS, the Tragedy Assistance Program for Survivors, is a support organization for spouses and family members who have lost a service member.

The Pentagon will continue to take the lead on addressing the number of military bases and communities with ground and well water contaminated by per- and polyfluoroalkyl (PFAS) compounds, which are cancer-linked chemicals found in the military’s firefighting foam.

There’s already some momentum within the Pentagon and Congress to address the impact of Aqueous Film Forming Foam (AFFF), which has been used since the 1970s to fight aircraft fires. The foam has concentrated amounts of PFAS compounds that are linked to cancers and birth defects. The compounds are found in everyday household products, but are concentrated in firefighting foam.

Over the past few decades, PFAS has seeped into groundwater and drinking well sources on military bases and the communities surrounding them. A number of cities are now calling on the Defense Department to clean up the contamination, citing rising numbers of cancers in their communities.

As the health risks have become more widely known, the services said they have backed off using the AFFF in training. For example, the Air Force now uses Phos-Chek 3 in training, which is a substitute foam that has lower levels of the compound.

The Marine Corps guidance now “is to use aqueous film forming foam (AFFF) for emergency firefighting only (i.e., no testing using AFFF) and minimizing releases to the environment where AFFF is required to be used,” said Marine Corps spokesman Capt. Joseph Butterfield.

The Navy “has ceased using AFFF for training purposes and has reserved the use of AFFF to rapidly extinguish Class B fires,” said spokesman Lt. Tim Pietrack.