Investigators now want to talk to the person who dropped the empty rice cookers, which were mistaken for pressure cooker bombs, at the Fulton St. station near Williams St., just a block from the Federal Reserve Bank.

Cops found a third rice cooker on W. 16th St. and Seventh Ave. near a pile of trash, but determined it was not dangerous. They’re now investigating to see if the two discoveries were connected. 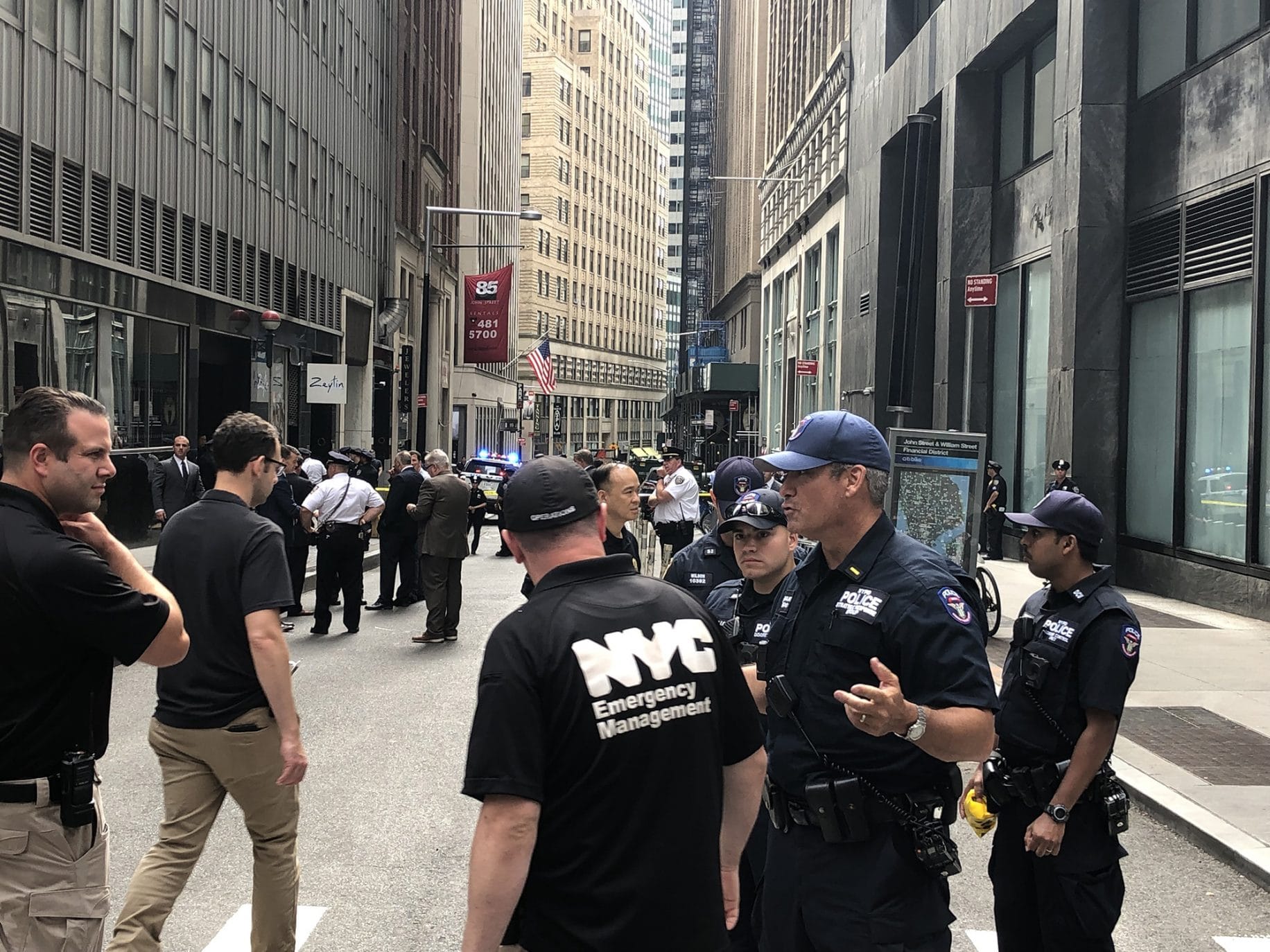 Police are pictured near the intersection of William and John Streets in lower Manhattan on Friday, Aug. 16, 2019. The area was shut down after two non-explosive rice cookers were found at the nearby Fulton St. subway station. (Michael Gartland/New York Daily News/TNS)

“Because of the timing, the placement and the items we are investigating this as a hoax device,” said NYPD Deputy Commissioner of Counterterrorism and Intelligence John Miller. “That is the investigative category. We want to identify him, find him and talk to him.”

The man was caught on video going into the Fulton St. station carrying the rice cookers in a shopping cart. He placed one of the items on the ground in the mezzanine area, then went downstairs and left one by the 2/3 train platform, officials said.

“There are people with shopping carts who pick things up and put them down on the street,” Miller said. “That’s a fact of urban life, but we need to find individual and talk to him.”

The suspicious packages were found at about 7:30 a.m.

Within an hour, members of the NYPD Bomb Squad determined the items weren’t dangerous. Cops scoured the station to look for more suspicious packages but didn’t find any, officials said. No injuries were reported.

Both nearby William and John streets were blanketed with police and shut down to pedestrians and vehicular traffic until about 10:15 a.m.

The rice cookers found in the Fulton St. station were empty, Miller said.

The third rice cooker was found about two and a half miles from the Fulton St. station near the same subway line.

“Our @NYPDCT Bomb Squad has cleared the devices inside of Fulton Street subway station in Lower Manhattan,” NYPD Chief of Counterterrorism James Waters tweeted along with pictures of the pressure cookers. “They are NOT explosive devices.”

Our @NYPDCT Bomb Squad has cleared the devices inside of Fulton Street subway station in Lower Manhattan. They are NOT explosive devices.

Out of an abundance of caution officers have searched nearby stations. pic.twitter.com/Y32I9DFEDf

Out of an abundance of caution officers have searched nearby stations.

The station was shut down and several train lines were rerouted as a precaution and the NYPD advised straphangers to avoid the area at all costs.

“It turned out to be nothing, but, look, this is a frightening world we live in,” Cuomo said during an interview on CBS 880. “All of these situations have to be taken seriously because, God forbid, one day, it’s not.”

“Unfortunately we learned the hard way after 9/11 and we are prepared,” Cuomo said.

On Dec. 11, 2017, 27-year-old Akayed Ullah set off a pipe bomb in transit near the Port Authority Bus Terminal, injuring himself in the blast.

“I always caution people, when we’re a few hours into a situation, we should not draw too many conclusions,” he said. “Let the NYPD do its investigation, and we’ll know more as the day progresses, but, what we do know now is there’s no danger to the people of this city.”