A landmark nuclear agreement that eliminated an entire class of land-based missiles is ending on August 2 as both the United States and Russia officially withdraw from the 31-year-old deal.

The bilateral Intermediate-Range Nuclear Forces (INF) Treaty banned the Soviet Union and United States from developing, producing, or deploying ground-launched cruise or ballistic missiles with ranges between 500 and 5,500 kilometers after it was ratified by U.S. President Ronald Reagan and Soviet leader Mikhail Gorbachev in 1988. 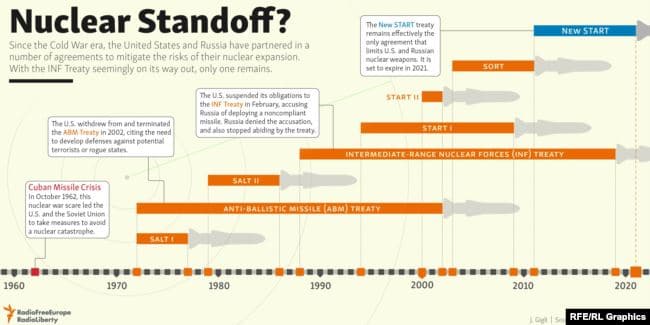 Washington said last year that it would be withdrawing from the INF Treaty, accusing Russia of failing to comply with it. Moscow denies it has violated the treaty.

Critics have warned that the pullout from the INF Treaty could lead to a new arms race between the United States and Russia — the successor state of the Soviet Union.

The world “will lose an invaluable brake on nuclear war” if the treaty lapses, he said on August 1.

“This will likely heighten, not reduce, the threat posed by ballistic missiles,” Guterres told reporters.

The INF and the successor to the Cold War-era START agreement to reduce strategic nuclear missile launchers, New START, a U.S.-Russia accord that entered into force in 2011, are two of the bedrocks of arms control between both the world’s leading nuclear-armed states.

New START will lapse in early 2021 unless the U.S. and Russian presidents decide to extend it.

U.S. and NATO officials have repeatedly accused Russia of developing weapons systems that they they say are a violation of the treaty, specifically the 9M729, or SSC-8, which according to NATO has a range of about 1,500 kilometers.

Moscow says the 9M729’s range is under 500 kilometers and accuses the U.S. of breaking the deal. 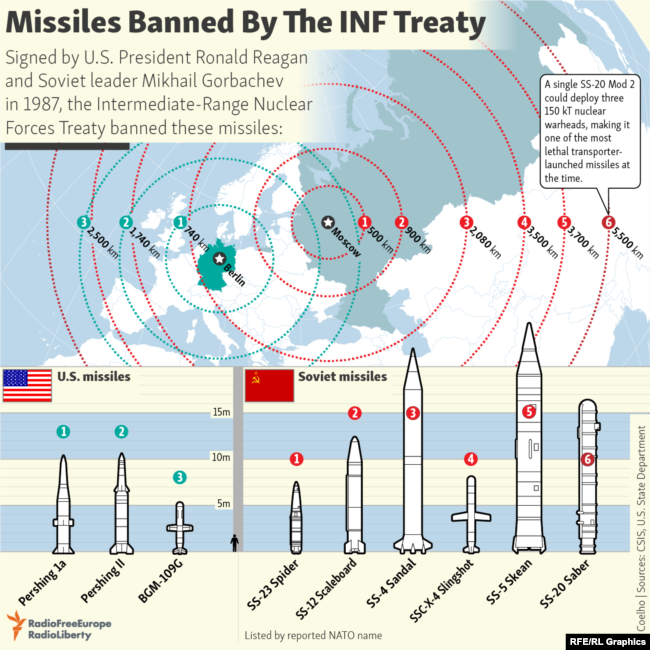 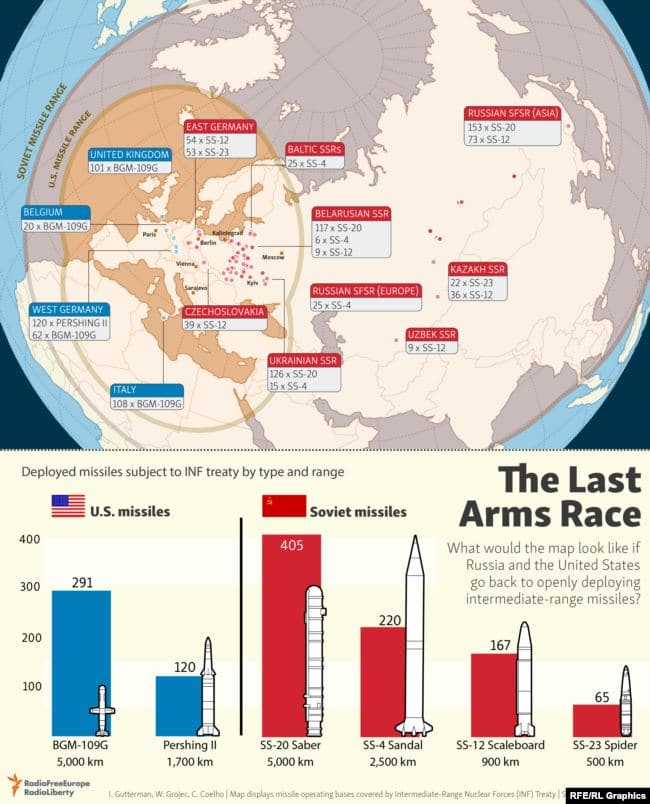 He urged both parties to “concentrate on preserving the New START treaty as the last pillar of global strategic security” but added that “judging by statements by U.S. administration officials, its future is uncertain.”

President Donald Trump on February 1 announced the U.S. plan to withdraw from the INF Treaty, saying it would suspend its obligations the following day and inform Russia that it would effectively withdraw from the accord in six months’ time — on August 2.

The U.S. administration said it was “restoring accountability to arms control” and that “six years of diplomacy and more than 30 meetings have failed to convince Russia to return to compliance with the INF Treaty. Enough is enough.”

Trump has called for involving another major nuclear power, China, in future negotiations on nuclear weapons.

NATO Secretary-General Jens Stoltenberg urged Moscow in February to return to compliance with the treaty, adding, “At the same time, we are planning for a world without the INF Treaty.”

Russia announced in March that President Vladimir Putin had signed a decree suspending Russia’s implementation of the treaty, kicking off that country’s months-long wind-down.

She said Washington had waged “an aggressive information campaign in the United States that turned everything upside-down and almost blamed Russia for being the first one to withdraw from the treaty,” according to TASS.

Moscow will issue an INF-related statement on August 2, Zakharova said.

On August 1, German Foreign Minister Heiko Maas laid the blame for the end of the INF on Russia, saying it “has not done what was necessary to save the treaty.”

He said the end of the INF spelled the loss of some European security and increased “challenges,” and echoed the call for the preservation of New START as a “remaining pillar” of international arms control.

“Without the INF Treaty, as well as the soon expiring New START, there would be no legally-binding, verifiable limits on the world’s two largest nuclear arsenals for the first time in nearly half a century,” the Arms Control Association (ACA), a Washington-based nonprofit that promotes public understanding and effective arms control policies, quoted the chairman of its board of directors, Thomas Countryman, as saying on the eve of the INF collapse.

The INF Treaty’s demise comes as the international community is grappling with how to respond to a mounting arsenal of nuclear weapons in North Korea, and amid efforts by several world powers to save a landmark deal to curb Iran’s nuclear program that the United States abandoned last year.