The Munroe Falls man spent much of the past year in a wheelchair after a bladder cancer diagnosis in December and seven ensuing surgeries, including the loss of his left leg below the knee due to poor blood circulation. Unable to keep his eyes open or speak in the end, the thought of one last ride in a 1953 Chevy Bel Air — like the one his dad gave him in high school — lifted his spirits as his body failed him.

The 74-year-old Army veteran, who was stationed in Germany during the Vietnam War, died with his family by his side at his home on Northmoreland Avenue in Munroe Falls on Thursday.

But the fleet of antique show cars came for him nonetheless.

At 12:15 p.m. Sunday, the Chevys led a column of 22 cars and a few motorcycles from a staging area at Chapel Hill Mall. The drivers had assembled from across Ohio and as far away as Kentucky to grant a dying man’s wish.

“As soon as we pulled out, raindrops fell like he was crying for the whole procession. It gave me goosebumps,” said David Slaton, who drove his 1953 Chevy 210 from Parma to line up directly behind the three Bel Airs.

In that moment on Northmoreland Avenue, Chick’s wife, Gale — surrounded by two daughters, several of her and Chick’s 10 grandchildren and a few of their nine great-grandkids — leaned forward against the railing of her front porch as the rain fell for a brief moment on an otherwise warm, sunny day. 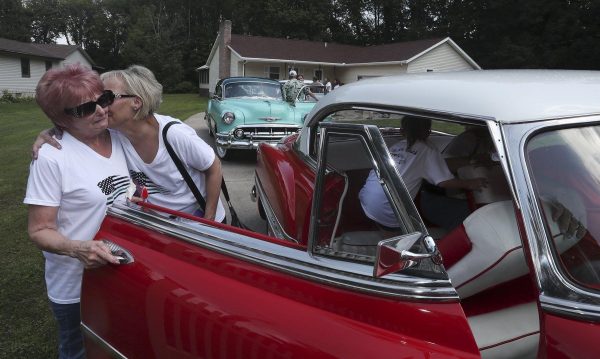 Gale Williams, left, gets a kiss from daughter Lisa Ware, one of her four children, before getting into a 1953 Chevrolet Bel Air at her Munroe Falls home for a memorial cruise-in for her late husband, Army veteran Charles “Chick” Williams, on Sunday Aug. 18, 2019. Chick Williams wanted to have a last ride in the car he first had as a teen a 1953 Bel Air, but he died before that wish could be fulfilled. (Mike Cardew/Beacon Journal/Ohio.com/TNS)

“We’ll just take this as a sign from dad,” said Lisa Ware, one of Chick and Gale’s daughters. “Now we gotta look for the rainbow.”

Chick and Gale fell in love while attending Cuyahoga Falls High School. He headed off to serve his country as a cook and truck driver.

After a vehicle accident, Chick spent three weeks unconscious in Germany. Stateside, Gale stayed by his side for six months at Walter Reed General Hospital, then for 53 years as his wife.

“To me, he was my support. My rock,” Gale said Sunday, occasionally turning to their two daughters and two sons for comfort. “Anything that ever happened, he always told me it’ll be alright.” 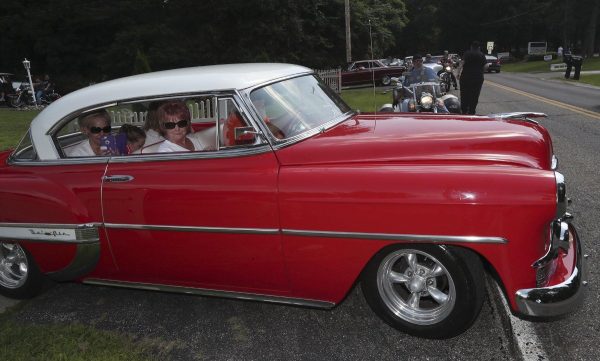 He was ornery and sweet, his grown children recalled, a “family guy” who coached Little League, built backhoes and engines for a living and served as a Reserve officer in Munroe Falls. Every Friday, he’d bring home pizza and let the children stay up past midnight watching “Big Chuck and Lil’ John.”

“My dad was a great guy,” said Tami Hillman, their other daughter. “He always took time out for us.”

Vic and Tony Williams remembered their father’s wry sense of humor and love of cars. Chick emptied his retirement account a couple years ago to buy and restore a 1953 Chevy Bel Air. Vic worked hard to refurbish the frame and rebuild the motor before his dad died.

A few weeks back, Vic said he was wrestling with a 10 mm bolt on the heater core. “Don’t worry about it,” he remembers his dad saying. But Vic wouldn’t give up. The bolt went on, said Vic, who plans to finish what he and his father started.

“It’s a lot of money,” Vic said of needing to restore the body, floor and interior of the car. “But I’m not stopping. My mom is going to drive it in my dad’s honor.”

Military veterans with the organization pinned a metal on Chick on Monday, commemorating his honorable discharge. Chick opened his eyes when a fellow veteran kneeled beside him.

After that, he only blinked at the sound of his children’s voices until he died Thursday, Gale said.

At the beginning of August, Gale posted on Facebook what a joy it would be to give her husband the gift of one last ride in the car of his youth. Beacon Journal partner Channel 5 News ran the story, which car enthusiasts spread far and wide on social media.

“I saw the post and said, ‘We’ve got to do something for this family,'” said Max Sprague, the founder of Ohio Car Shows and Cruise In, a Facebook group of about 7,400 members.

Sprague began to organize what would become a memorial. The Bel Airs picked up Gale and her family and took them back to Chapel Hill Mall, where the vehicles lined up like a car show. Music played. A Swensons food truck kept the crowd fed.

“I just want to say thank you from the bottom of my heart,” Gale told the crowd. “Chick would be so honored to have everybody here. He kept saying, ‘Why are they doing this for me? I don’t deserve it.’

“But this day put smiles on his face, took away his pain in the last few days he had,” she said.