Grunt Style’s new t-shirt design makes a statement using the circle of 13 stars developed by Betsy Ross in the 1770s as a representation of the 13 original colonies – a design Grunt Style believes is integral to the nation’s history.

Grunt Style announced the new design on their social media platforms in a simple way: a photo of Grunt Style CEO Daniel Alarik and President Tim Jensen modeling the new shirts with the caption, “We Did It!”

“The remarkable fact about America is that over the course of human history, we as a people and nation, continue to expand freedoms through each generation. A generation that forgets its heritage and the sacrifice of blood, sweat and tears will be the last generation to enjoy its own freedoms,” Grunt Style CEO and Army combat veteran Daniel Alarik told American Military News.

“Understanding that we are not a perfect nation, rather that we strive to be a more perfect union with each new generation that comes behind those who have carried the burden of those imperfections and worked tirelessly to improve our commitment of life, liberty, and the pursuit of happiness,” Alarik added. 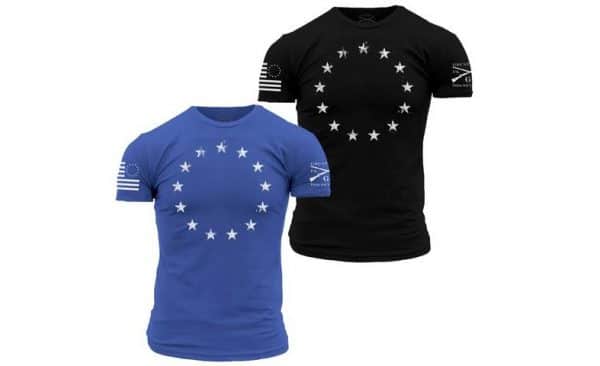 Some opponents of the design, like Colin Kaepernick, argue that it’s offensive because it was created during an era that fostered slavery.

It was Kaepernick’s complaints that led Nike to cancel the release of a $140 sneaker, dubbed “Air Max 1 USA,” which featured the Betsy Ross flag design and was slated for release on July 4 to celebrate the national holiday.

Alarik remarked on Nike’s decision directly on his own social media channels.

“Nike is a company, they speak for themselves and their shareholders. This is America and they can exercise their freedom however they want. Just like you can celebrate by choosing not to buy their products,” he wrote.

“But as for me and my family, we recognize that the founders were fallible, flawed, and human. Who came together to create a more perfect opportunity in a nation, an opportunity that had never existed before. Which, through years of struggle and conflict have in many cases become even better. We honor that,” Alarik added.

“Those that reject our history because of flawed humans, are casting stones at glass houses,” he concluded.

“Whether she did or didn’t the legend is interwoven into the fabric of our nation, for good, for bad, it was a unifying symbol for the colonies to throw off the bonds of oppression, an action we should all still strive towards,” Grunt Style noted in the product description, addressing the controversy over whether or not Betsy Ross actually created the flag in the first place.

Grunt Style is a lifestyle brand comprised of “nearly 400 U.S. Veterans and Patriots” who claims to have “taken the American fighting spirit and instilled it in everything we do,” according to their website.

“You don’t have to be a Veteran to wear Grunt Style, but you do have to love Freedom, Bacon and Whiskey,” their website says.

Their unapologetic patriotism, support for the military and the Constitution, and lack of a politically correct filter has sparked a nationwide fervor that just keeps increasing.

More than nine years after its inception, the now $100+ million Illinois-based company has amassed more than 1 million Instagram followers and 2.7 million Facebook followers of like-minded America-loving veterans and patriots.