Trump threatens to ratchet up sanctions on Iran

U.S. President Donald Trump is threatening to ratchet up sanctions on Iran and has again denounced the 2015 nuclear deal Iran signed with world powers as the UN nuclear watchdog held an emergency meeting on Tehran’s breach of the deal.

“Sanctions will soon be increased, substantially!” Trump said on Twitter on July 10.

Iran has long been secretly “enriching,” in total violation of the terrible 150 Billion Dollar deal made by John Kerry and the Obama Administration. Remember, that deal was to expire in a short number of years. Sanctions will soon be increased, substantially!

In 2018, Trump pulled the United States out of the deal, which offered Tehran sanctions relief in exchange for significant curbs on its sensitive nuclear activities.

Iran had been complying with the deal, but over the weekend it increased its uranium enrichment beyond limits set in the accord in an attempt to pressure European countries to find a way around U.S. sanctions.

Trump also said that Iran had been secretly enriching uranium, without providing proof.

“Iran has long been secretly ‘enriching,’ in total violation of the terrible 150 Billion Dollar deal made by John Kerry and the Obama Administration,” the U.S. president tweeted.

Earlier, a senior U.S. diplomat told the United Nations’ nuclear watchdog that Iran’s recent moves to enrich uranium beyond the limits of its 2015 nuclear deal with world powers amounted to “nuclear extortion.”

Jackie Wolcott, the U.S. ambassador to international organizations in Vienna, made the remarks at an emergency meeting of the International Atomic Energy Agency (IAEA) on July 10.

Reacting to Iran’s threat to further boost its enrichment of uranium if European signatories to the 2015 nuclear deal don’t provide Tehran with sanctions relief within 60 days, Wolcott said Iran’s “misbehavior” should “not be rewarded.”

Wolcott reiterated that Washington abandoned the nuclear deal because the United States believes it was ineffective in guaranteeing that Iran is not trying to produce nuclear weapons. But she said Washington remained “open to negotiation without preconditions.”

Iran’s envoy to the IAEA said Tehran was prepared to return to “full implementation” of its deal with world powers, but only when matched by the full compliance of “all participants.”

Kazem Gharib Abadi, told the IAEA meeting that U.S. actions were “neither legitimate nor legal” and should not be accepted by the international community.

Russia’s ambassador to the IAEA, Mikhail Ulyanov, told the assembled diplomats it was an “oddity” that the meeting had been called by the United States, “the country that declared the JCPOA to be a ‘terrible deal.'”

In a joint statement to the meeting, Britain, France, and Germany highlighted their continued diplomatic efforts to save the nuclear deal.

They expressed regret over the U.S. withdrawal from the accord but said again that European “commitment to the nuclear deal, including sanctions lifting for the benefit of the Iranian people, depends on full compliance by Iran.”

The emergency IAEA meeting on Iran was called at the request of the United States just days after Tehran announced its second violation of the 2015 deal.

Iran says it has deliberately breached two key aspects of the 2015 accord in response to Washington’s withdrawal from the deal and the reimposition of sanctions by President Donald Trump.

Tehran is now enriching uranium beyond the level agreed upon in the deal. It says it is also increasing its stockpile of low-enriched uranium above the limit in the treaty.

Tehran says it wants to compel European signatories of the nuclear deal to help Iran’s sanctions-hit economy or face the collapse of the deal that took years to negotiate.

But the United States is exerting influence on its European allies to be tougher on Iran.

Germany, France, Britain, and the European Union expressed “deep concern” on July 9 at Iran’s enrichment activities. They called on Tehran to reverse the move “without delay.”

They also have asked for an urgent meeting of all remaining parties to the nuclear deal in the near future.

A senior Iranian official said on July 10 that Iran would not reverse its decision to increase uranium enrichment beyond the limits set by the nuclear deal until its “full rights” were fulfilled under the deal.

Ali Shamkhani, the secretary of Iran’s Supreme National Security Council, made the comments in a meeting in Tehran with French President Emmanuel Macron’s top diplomatic adviser, Emmanuel Bonne, who has travelled to Tehran to decrease rising tensions.

In his meeting with Bonne, Iranian President Hassan Rohani said Tehran had “completely kept the path of diplomacy and talks open”, according to a statement from his office.

Ahead of the meeting, Zarif was quoted as saying that “Negotiations are never possible under pressure,” in a reference to crippling U.S. sanctions. 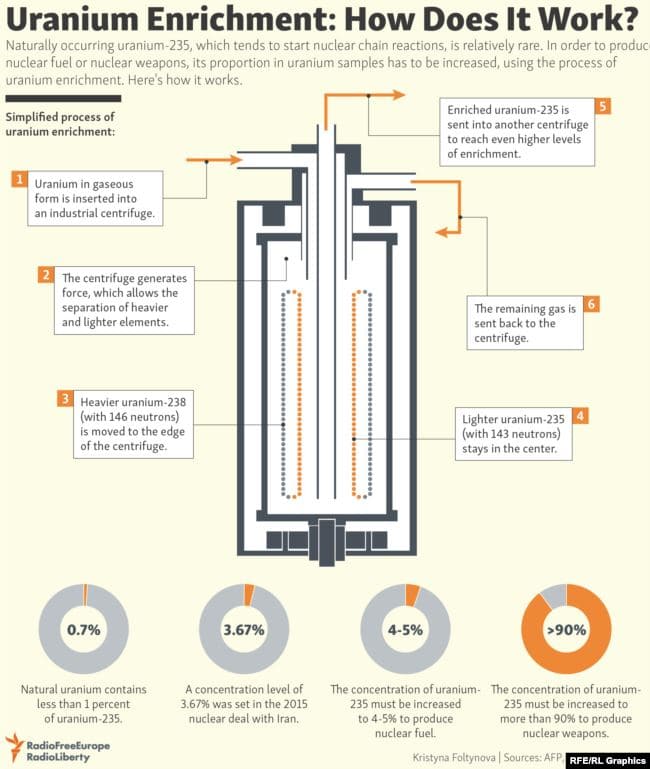 Uranium Enrichment: How Does It Work? (Radio Free Europe/Radio Liberty/Released)