Trump administration to expand quick deportations anywhere in US

Immigration and Customs Enforcement officers will be able to more quickly arrest and deport undocumented immigrants anywhere in the United States without going before an immigration judge under a new policy released by the Trump administration Monday. 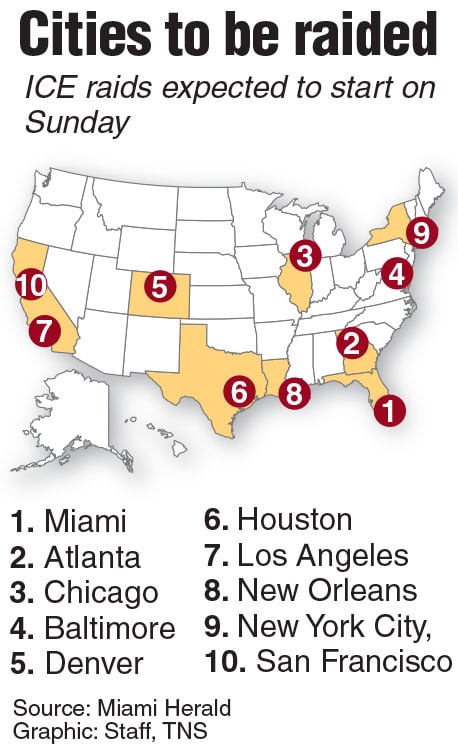 Cities to be raided by ICE Sunday. (TNS/Released)

Under current policy, immigration officials can apply expedited removals to speed deportations of people apprehended within 100 miles of the border and for those who’ve been in the country up to two weeks. Those who arrived in the U.S. by sea, rather than at U.S. land borders, can be subject to expedited removal for up to two years.

Under the new policy, officials will be empowered to use the fast-track procedures anywhere in the U.S. and for anyone who cannot show “to the satisfaction of an immigration officer, that they have been physically present in the United States continuously for the two-year period immediately preceding” arrest, regardless of how they arrived, according to the notice published Monday.

The new deportation policy is the second major effort by the administration this month to aggressively expand its power to try to keep migrants out of the U.S. or remove them if they enter. Last week, the administration moved to curb asylum in the U.S. That rule effectively eliminated almost all asylum claims at the U.S. southern land border by rendering ineligible any asylum-seeker who’d transited at least one other country prior to arriving.

The move to expand expedited removals comes as backlogs in immigration courts continue to grow. Nearly 950,000 cases are currently pending in U.S. immigration courts, with an average wait time of 713 days, or just under two years, according to Syracuse University’s Transactional Records Access Clearinghouse.

President Donald Trump and his hard-line anti-immigration aides have been frustrated that despite concerted efforts to step up enforcement and crack down on immigration, they’ve largely been unable to reverse a surge in migration to the U.S. southern border and the ballooning backlog in immigration cases.

Lee Gelernt, deputy director of the ACLU’s national Immigrants’ Rights Project, said the expanded expedited removals increases the concern advocates already had that the quick deportations have been violating immigrants’ rights to due process.

“The expedited removal system is already unconstitutional, in our view,” Gelernt said. “This expansion will only increase the illegality.”