Veteran-owned Nine Line Apparel has released a new campaign slamming Nike for what it views as another anti-American act.

After Nike halted a sneaker featuring the Betsy Ross flag due to reported complaints of offense from Colin Kaepernick, Nine Line Apparel released a T-shirt bearing the flag, along with a call to boycott Nike and a video criticizing the company. 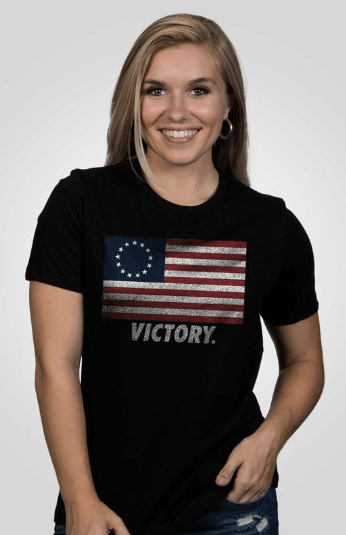 “Nike seeks profit through controversy, but with absolutely no regard for the consequences,” said Nine Line CEO and retired Army Capt. Tyler Merritt in a statement to American Military News. “In its corporatist wake, it leaves behind anti-American sentiment and division, harming our country. But since Nike has no interest in displaying the Betsy Ross flag, a classic symbol of freedom and unity, then we proudly will.”

“How far Nike has fallen. It was once an iconic American company. Now it can’t even stomach associating itself with one of the greatest moments in our country’s history, when individuals of diverse backgrounds put differences aside to fight tyranny and secure liberty, even as it continues to outsource jobs to China,” Merritt added.

“The American people should support the red, white and blue, and boycott Nike and join our #NoToNike campaign. Nike says ‘just do it.’ We say just stand – stand for your beliefs and for your country,” Merritt concluded.

Nike had teased the release of the $140 sneaker, dubbed “Air Max 1 USA,” which featured the Betsy Ross flag design and was slated for release on July 4 to celebrate the national holiday.

Arizona will withdraw incentives for Nike’s manufacturing plant in the state after the sportswear maker pulled the release of a sneaker that featured the ‘Betsy Ross flag’ https://t.co/BWaGgYHNXG pic.twitter.com/4dbJlpOYp4

Kaepernick reportedly saw Nike’s images online and expressed to the company that the Betsy Ross design was created at a time concurrent with slavery, which causes offense to people.

The flag design with the circle of stars was developed in the 1770s as a representation of the 13 original colonies. Because slavery occurred during that era, some opponents argue the flag design used at the time is a symbol of white supremacy.

Nine Line’s video accompanied their release of the Betsy Ross flag T-shirt with the word “Victory.”

“Let’s take a minute to talk about the child that is Colin Kaepernick, once again forcing himself back into the media because he deemed something ‘offensive’ or ‘racist’ again,” said Nine Line Apparel employee Zac Scalf, a three-time deployed combat veteran.

Scalf continued by contrasting Nike’s actions with its history, pointing out that Nike was co-founded by Bill Bowerman, a decorated World War II veteran. He said Bowerman remained on the board into his retirement and until his death in 1999.

It’s not the first time Nine Line has called out Nike and launched a product a counter it.

They previously launched a line of T-shirts bearing the words “Just Stand” above a flag-themed swoosh design reminiscent of Nike’s logo. The design was a message against Nike making Kaepernick the face of their “Just Do It” campaign, which included his face and messages proclaiming his sacrifice – “Believe in something, even if it means sacrificing everything.”

The campaign drew widespread criticism from those who questioned why Kaepernick was chosen as the face of sacrifice, and what, exactly, he had sacrificed as an NFL player with lucrative advertising deals.