When Celina Flores graduated from Stagg High in 2004, she feared her days as an United States Army recruit would be short.

“I joined at 90 pounds,” she said. “I almost needed a waiver because I was too small.”

Today the former pipsqueak might as well be the poster girl for the “Army Strong” campaign. The Stockton native is still considered undersized, at 4-foot-10, 125 pounds. But her insecurity has been replaced by muscle. 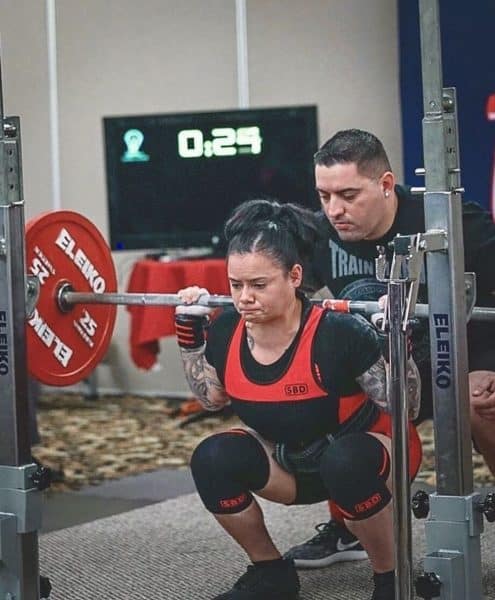 She will arrive there holding the military bench press record for her weight class. Not bad for someone who once wondered if she had the strength to last.

“I had a friend go to Marines boot camp and broke her leg the first week,” Flores said. “She was way stronger than me. Everybody knew she was going to make it. But she never went back. I thought, ‘If she can’t do it, what about me?'”

Flores, 33, a Sergeant 1st Class in the U.S. Army Human Resources Command, discovered weight lifting as a way of coping with the stress inherent in the military. Her workouts have been an anchor for Flores during her 15-year career.

She started lifting seriously for competition in the last three years. Flores won the women’s 56-kilogram (125-pound) Drug-Tested Tennessee State Championship on May 18. That’s where she set the bench press record for that weight class. She said the previous 143-pound mark was “super low, something I could lift easy.” She topped it at 148.5 pounds.

In competition she completes three lifts – the squat, bench press and deadlift. Flores has three opportunities at each method. The highest weight at each lift is used for her overall total. Her highs are a 225-pound squat, 160-pound bench press and 259-pound deadlift.

In addition to daily Army training before she tends to administrative duties such as managing promotions and awards, Flores puts in another two to three hours lifting weights and 30 minutes of yoga.

“I’m the strongest I have ever been since I’ve been lifting,” she said. “I call it a hobby, but it’s obviously what I love doing.”

Flores started lifting to relieve stress during her first tour in Iraq in 2005. Lifting saved her from inactivity and suspected postpartum depression after the birth of her son in 2009. It gave her something to concentrate on during a second stint in Iraq (from October 2007 to December 2008) and when she was in Korea.

She is excited about the international competition and the positive attention she has received on the base since news of her championship circulated. She said was lost in high school before being recruited – passing tests but having poor grades because she wouldn’t do homework. Reaching teen girls like her is important to the 33-year-old.

“It’s so important to stay connected to where you came from,” Flores said. “I get messages a lot from high school girls who have thought about lifting but they’re scared because it’s mostly men. Being able to get a much exposure a possible, not just as a female, brings all those things together.”

Her son Damien, now 9, stayed with her mother and grandmother in Stockton during the Korea tour (Feb. 2017-June 2018). Daily video calls were a must, but rather than go home to an empty space, Flores filled hours at the gym.

Now Damien, mother Barbara Bollinger and grandmother Betty Stringfield live with Flores near Fort Knox, where she is stationed.

“They allow me to do the cool things I get to do,” Flores said.

Though her father Jesse Flores and two brothers still live in Stockton, Flores doesn’t often have the opportunity to come home. Summer vacation to California is not in the cards – Flores will spend the next four months dedicated to training.

In December she hired personal trainer Collin Whitney, a U.S. Air Force reservist and certified USA Powerlifting Coach. Whitney designed a workout plan for Flores and, from afar, checks video footage of her form. They will meet for the first time in Ireland, where he has two other clients competing.

“He’s super flexible and I love that,” Flores said. “A lot of coaches will say, ‘if you don’t want to do it my way, it’s not going to work.’ He’s really approachable. If I hate an exercise, he’ll give me something else to do.”

For example, Whitney offered an alternative to front squats by suggesting dumbbell lifts. Both exercises put the weight in front of her body and work the same muscles. Whitney said Flores has progressed steadily since they began collaborating in December. He feels the athletes who have military experience are traditionally more dedicated, Flores among them.

“It takes a ton of hard work and dedication to be in those career fields on top of taking a sport like powerlifting seriously,” Whitney said via text. “It’s very demanding on both ends and many can’t seem to it. But Celina has continued to put in the work while excelling in both aspects.”

Whitney indicated that kind of effort is why he thinks she is “just scratching the surface” on all her lifts. He is looking forward to seeing her hard work pay off in person.

Flores credits the “power of the internet” for finding Whitney, who sends Flores a new plan every three to four weeks to keep her sharp. She does not take days off, but backs off on Sundays when she trains with lighter weights.

“I treat it like an active recovery,” Flores said. “I’ve had a lot of injuries I work through all the time. The longer I rest, the harder it is to get back into it.”

There is a new Army Combat Fitness test on the horizon that Flores feels will serve new recruits better. The standard of push-ups, sit-ups and a two mile run will be replaced by October 2020 with a six-part test.

That 90-pound sled would have been more daunting for Flores when she was a 90-pound recruit. She has already started incorporating the exercises into her training. Flores is thrilled the Army has modernized its test to reflect movements used in action. She had completed the test and, not surprisingly, scored well.

“I think it’s way overdue,” Flores said. “As long as the Army has been in conflict, this type of test is directly related to what you’ll see over there. This gives a more accurate assessment of ability.”

“We do a lot of push-ups, sit-ups and he’s almost there on the pull-up, She said. “He wants to lift weights. He says, ‘Yeah, but I want the big weights.’ “