John Jenkins, a veteran that landed on a Normandy beach 75 years ago, spoke at a D-Day commemoration ceremony in Portsmouth, England today, which earned him a standing ovation.

Attendees including President Trump, the Queen of England, Prince Charles, and British Prime Minister Theresa May stood to applaud and honor Jenkins, who shared his story of D-Day, WWII, and the brothers that he lost, according to the Sun.

Take a look at his speech below:

Jenkins said he was 24 years old when he landed in Normandy on Gold Beach on June 8, 1944. He was a platoon sergeant in the Pioneer Corps at that time.

In his speech, Jenkins said, “I was terrified. I think everyone was – you don’t show it, but it’s there. I look back on it as a big part of my life, it changed me in a way – but I was just a small part in a very big machine.”

“You never forget your comrades because we were all in there together. It’s right that the courage and sacrifice of so many veterans are being honored 75 years on. We must never forget – thank you,” he said.

Following his efforts in Normandy, Jenkins went on to help liberate the Fallingbostel concentration camp in Germany.

Once the war concluded, Jenkins stayed on to work at the Portsmouth naval base, first as a bus driver and then a crane operator.

Jenkins served in the Territorial Army for several years, earning the rank of Company Sergeant Major and being awarded the Member of the British Empire (MBE).

Jenkins said his note to future generations would be, “Let’s have no more wars.” 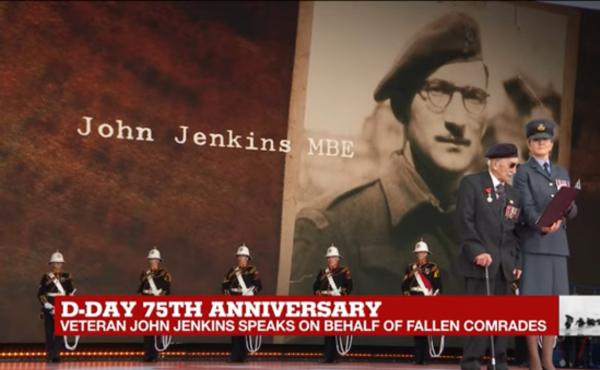 At the end of the ceremony, the Queen of England said, “When I attended the commemoration of the 60th anniversary of the D-Day landings, some thought it might be the last such event.”

“But the wartime generation – my generation – is resilient, and I am delighted to be with you in Portsmouth today,” she added.

“The heroism, courage and sacrifice of those who lost their lives will never be forgotten. It is with humility and pleasure, on behalf of the entire country – indeed the whole free world – that I say to you all: thank you,” the Queen concluded.

“The enemy is strong. He may hurl back our forces but we shall return again and again; and we know that by Thy grace, and by the righteousness of our cause, our sons will triumph,” he said.

A full video of the event can be watched below: