At approximately 11:45 am on June 7, 2019 while operating in the Philippine Sea, a Russian Destroyer (UDALOY I DD 572) made an unsafe maneuver against USS Chancellorsville (CG-62), closing to ~50-100 feet putting the safety of her crew and ship at risk. (U.S. Navy/Released)
June 11, 2019 Melissa Leon
Share
Tweet
Flip

A Russian admiral says it’s not unusual for Russian sailors to be sunbathing on the decks of destroyers, let alone when said destroyer is headed for near-collision with a U.S. Navy warship, according to Russian state media.

“There is a time for war, and a time for sunbathing,” Adm. Valentin Selivanov said when asked about the near-collision last week between a U.S. Navy guided missile cruiser and a Russian destroyer in the Philippine Sea. Notably, that Sputnik article is titled, “Russian Admiral Lauds Crew’s Poise in Near-Collision With US Cruiser.”

The U.S. Navy released video footage and photos of the near-collision, and in one video, Russian sailors could be seen sunbathing on the helicopter pad.

“The East China Sea. Our vessel is on the move in the open sea. … The seamen and officers have had lunch. They are on their after-lunch break, glad to be serving in the south. After all,” Selivanov said, “they are not at war.”

“Sure, if one was sunbathing, then dozens were. And yes, you have to be undressed to sunbathe,” he added.

The USS Chancellorsville, a Ticonderoga-class guided-missile cruiser, was traveling in the Philippine Sea when it was approached by the Russian destroyer, which came within 50 to 100 feet of colliding with the U.S. ship.

The video below shows the close encounter:

The U.S. Navy had released a statement on this incident, saying:

At approximately 11:45 am on June 7, 2019 while operating in the Philippine Sea, a Russian destroyer (Udaloy I DD 572) made an unsafe maneuver against USS Chancellorsville (CG-62), closing to ~50-100 feet putting the safety of her crew and ship at risk.

While Chancellorsville was recovering its helicopter on a steady course and speed when the Russian ship DD572 maneuvered from behind and to the right of Chancellorsville accelerated and closed to an unsafe distance of ~50-100 feet. This unsafe action forced Chancellorsville to execute all engines back full and to maneuver to avoid collision.

We consider Russia’s actions during this interaction as unsafe and unprofessional and not in accordance with the International Regulations for Preventing Collisions at Sea (COLREGS), “Rules of the Road,” and internationally recognized maritime customs.

The Navy also released an aerial photo showing the distance between the two ships. 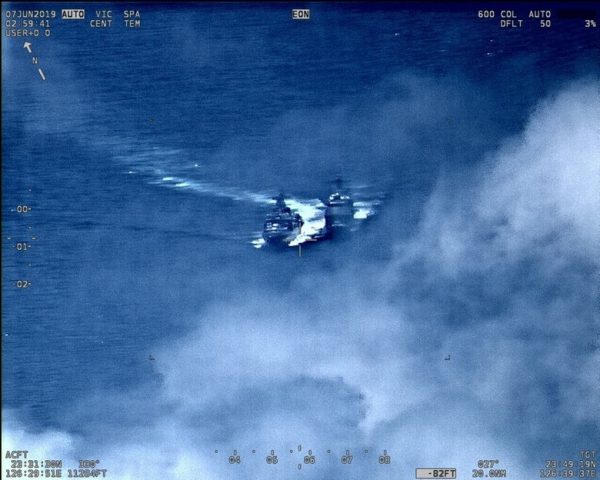 At approximately 11:45 am on June 7, 2019 while operating in the Philippine Sea, a Russian Destroyer (UDALOY I DD 572) made an unsafe maneuver against USS Chancellorsville (CG-62), closing to ~50-100 feet putting the safety of her crew and ship at risk. (U.S. Navy/Released)

Russia’s Pacific Fleet told Russian news agency TASS that their crew “voiced a protest to the U.S. command after its guided-missile cruiser hindered the passage of the Admiral Vinogradov anti-submarine destroyer some 50 meters in front of it, forcing the vessel to perform a dangerous maneuver.”

However, the wake from the Russian ship in the above photo shows that it headed straight toward the U.S. ship and veered away when it closed in. Meanwhile, the USS Chancellorsville’s wake appears to indicate it was traveling on a straight path.