AL car dealership resumes promo for free gun, US flag and Bible with purchase after Ford asked to remove it

A car dealership in Alabama decided to resume their patriotic promotion ahead of Independence Day hours after removing it per Ford Motor Company’s request.

Chatom Ford in Chatom, Alabama introduced a month-long “God, Guns and Freedom” promotion on Friday and offered a Bible, a 12-gauge shotgun and an American flag to each person that buys a new or used vehicle, Fox News reported.

“We were running a promotion celebrating this country’s independence. Ford Motor Company has asked us to stop running the advertisement. They manufacture the products we are franchised to sell, so we are complying with their request. We appreciate everyone’s support. All the phone calls and messages were so greatly appreciated. We will fulfill all commitments we made to our customers,” Chatom Ford had posted on their Facebook page Wednesday afternoon.

Hours later, Chatom Ford had a change of heart and resumed the promotion with a new video:

Now deemed “God and Glory,” the promotion eliminates the mention or display of the shotgun previously included in the original video. In its place is a gift certificate, though it’s not specified what the gift certificate entails.

The dealership manager, Koby Palmer, had originally posted a video about the promotion on Friday, which amassed more than 117,000 views on their Facebook page before it was removed.

The video showed Palmer holding a Bible, standing by a pickup truck with an American flag covering its tailgate. 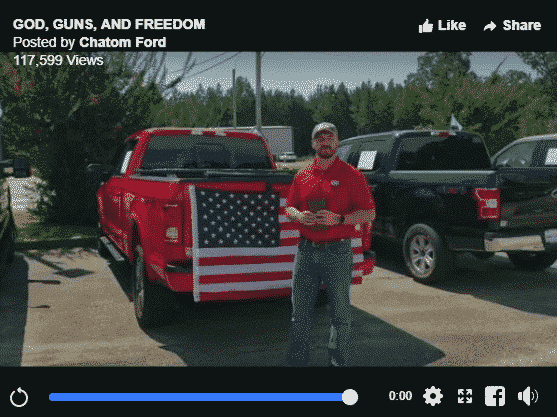 “Hi all this is Koby Palmer with Chatom Ford in Chatom, Alabama. I just want to reach out to everybody in the area and let y’all know we’ll be celebrating July 4th a little bit differently this year,” Palmer had said in the video.

“Between now and the end of July, everyone that comes into our dealership and purchases a new, pre-owned or certified pre-owned car, truck or SUV, not only are they going to get the great deals and service that we provide here, they’re also going to get a Bible, an American flag and, also, a 12-gauge shotgun,” he added.

Before the video was removed, Palmer told USA Today on Tuesday, “I guess it went viral, as the kids say.”

Palmer said the dealership wanted a patriotic promotion that represented the values of the rural community.

“We don’t want anyone to get the wrong idea. It’s not like we’re just walking around and handing out guns,” he told Newsweek. “It’s a safe community. They’re very proud of their country and almost everybody here likes to hunt.”

Customers who purchased a vehicle from the dealership are not required to accept the special offer.

“This is just showing support for our local community. Anyone that doesn’t 100% agree with what we’re portraying, we’re not trying to force our beliefs on anybody. We respect anybody that disagrees, no matter how vehemently they do,” Palmer told USA Today.

Customers who do accept the officer can take their certificate and vehicle purchase receipt to one of the licensed gun dealers Chatom Ford had allocated in Mississippi and Alabama. The dealers plan to conduct background checks on buyers before taking possession of the 12-gauge shotgun in order to complete the legal transfer.

The promotion began on Friday, and by Monday, Palmer said the dealership had sold five cars in three business days, an amount considered “booming” for their small town business.