Seven people were killed and three others injured when a large group of motorcycles traveling on a New Hampshire 2-lane road collided with a pickup truck Friday evening.

**UPDATE** 7 ple killed in head-on collusion in Randolph, NH belonged to “Jarheads MC.”According to a Gofundme pg group was heading to a charity event in Gorham b4 fatal accident. 5 patch holders and 2 supporters were killed. @wbz #jarheadsmc #rip pic.twitter.com/KJCbcTLzgQ

Seven people were pronounced dead at the scene, police said. One injured person was airlifted to the Maine Medical Center in Portland, while two others were transported by ambulance to Androscoggin Valley Hospital.

According to the Boston Globe, the pack of motorcyclists, a group of Marine veterans [and their spouses], had just left the bed and breakfast in Randolph where many were staying when the collision happened. 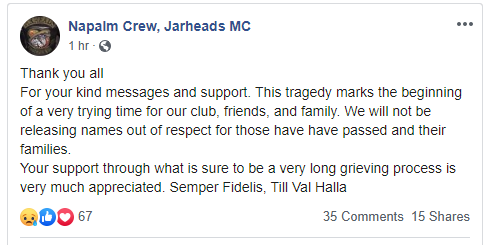 Witnesses described seeing bodies spread across the highway among debris from shattered motorcycles. The pickup truck involved in the incident burned at the scene.

New Hampshire State Police closed the roadway for investigation and only reopened it Saturday morning.

[A GoFundMe has been set up to support victims and families.]