A 57-year-old man identified in court records as the longtime companion of Los Angeles real estate mogul Cynthia Beck was behind bars for several hours overnight after police seized more than 1,000 guns — including some authorities allege were fully automatic — from a home in the ritzy Bel-Air neighborhood.

When investigators with the Bureau of Alcohol, Tobacco, Firearms and Explosives and the Los Angeles Police Department arrived at the five-bedroom estate on North Beverly Glen Boulevard about 4 a.m. Wednesday, they were met with an unusual situation: The sprawling Bel-Air mansion, just down the street from a plethora of celebrity homes, was in complete disarray.

Authorities described the property as a hoarder’s paradise, with guns strewn throughout several of the home’s rooms. It took about 30 law enforcement personnel more than 12 hours to remove all the weapons, which included rifles, shotguns, “assault weapons” and pistols, authorities said. 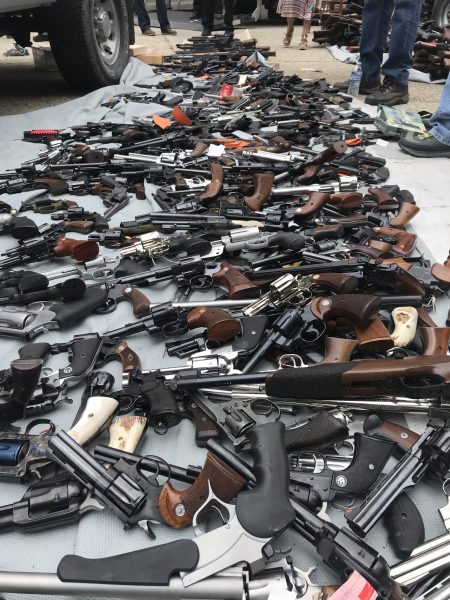 Girard Saenz, who was in the home at the time, was arrested on suspicion of violating California’s law regarding “assault weapons” and .50-caliber Browning machine guns. The law prohibits the manufacture, distribution, transportation, importation and sale of any “assault rifle” or .50-caliber weapon, except in specific circumstances.

The guns, which authorities say Saenz was selling, were laid in stacks atop blankets on the property’s winding driveway for officials to catalog. Eventually, the stockpile was loaded into the back of a large box truck and driven off the property. The weapons will be itemized and booked into evidence, said Lt. Chris Ramirez, an LAPD spokesman. 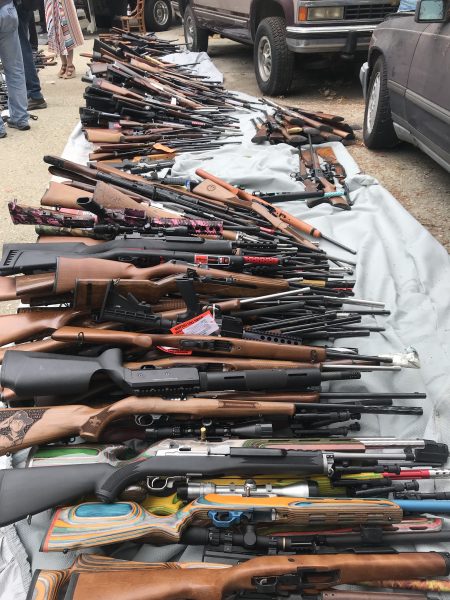 “This is a big stash,” Ramirez told reporters at the scene. “It’s beyond comprehension that somebody can have so many weapons in a residence like this, in a neighborhood like this.”

Authorities launched the investigation into the cache after they received an anonymous tip about a person manufacturing and selling guns at the Bel-Air home.

The ATF said in a statement that its agents searched the house after discovering Saenz was illegally selling firearms outside the scope of the federal license he possesses. Law enforcement has not specified how any weapon sales were conducted. 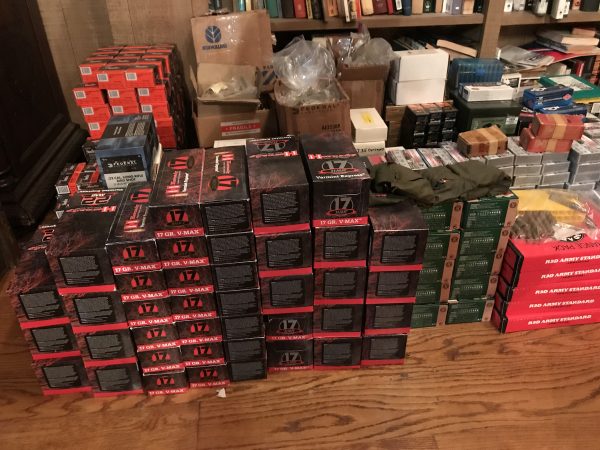 Saenz was released from custody shortly after 9 a.m. Thursday after posting $50,000 bond. He could not be reached for comment.

Public records show the Bel-Air property is owned by Beck, who has three daughters with J. Paul Getty’s son Gordon Getty. Beck bought the house in January 2001, but it remains unclear what, if any, connection she has to Wednesday’s events.

Beck grabbed headlines in 1999 when news surfaced that Getty, who was married and had four grown sons, was the father of her three young daughters. In more recent years, Beck has accumulated a trove of properties in Los Angeles and San Francisco, some of which she owns with Saenz, according to public records.

It is unclear whether Beck lives at the home where the weapons were found. She could not be reached for comment Thursday.

Saenz has been a licensed general building contractor since 1994 and operates a business that he started in the early 1990s in San Diego called Gerry Saenz and Associates, according to public records. Archives from a newspaper in San Diego’s Coronado area from 1993 note that the business specialized in architectural environmental lighting and landscape design.

Saenz’s current business address is a property on North Bunker Hill Avenue in Los Angeles, which he owns with Beck. The home was one of several locations searched by authorities Wednesday, law enforcement sources not authorized to speak publicly told the Los Angeles Times. 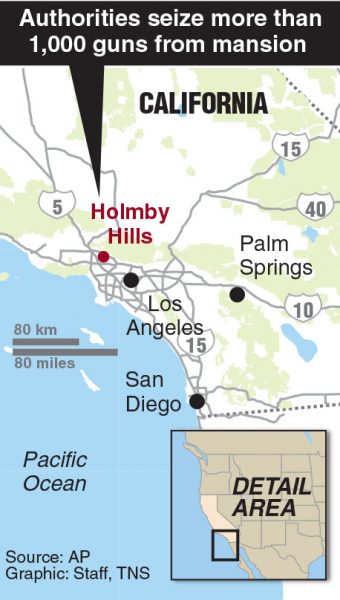 Locator map of Holmby Hills, California where 1,000 guns were found in mansion. (TNS/Released)

Saenz was arrested in Malibu at a home on suspicion of brandishing a firearm in September 2017, but the matter was not considered for charges after the alleged victims told deputies they did not want to pursue the matter, according to a sheriff’s spokesman. Saenz was released within a few hours of being detained.

Public records indicate Saenz lived in the San Diego area with his ex-wife in the early 1990s and eventually moved to Los Angeles. Neighbors say the home where Saenz was arrested is normally quiet.

“I was talking to my neighbors. Nobody knows who he is,” said resident Nicole DiGiorgio, a New York City native who was among the few people walking through the neighborhood, which lacks sidewalks but features gated driveways and sprawling lawns. “I walk up and down here all the time. I never see anyone come in or out.”

But an opposite scene unfolded Wednesday as law enforcement swarmed the property, stirring up neighbors’ concerns.

On Thursday, Bel-Air bustled with housekeepers, gardeners and maintenance staff tending to the clay tennis courts and tangled private jungles that dot the tony enclave. Drivers slowed past the Beverly Glen home to snap photos and show it to their friends on FaceTime.

“It’s scary because you think it’s a safe place, especially this area,” said Christian Aleman, a carpenter who parks across the street from the home and walks to a nearby job site. 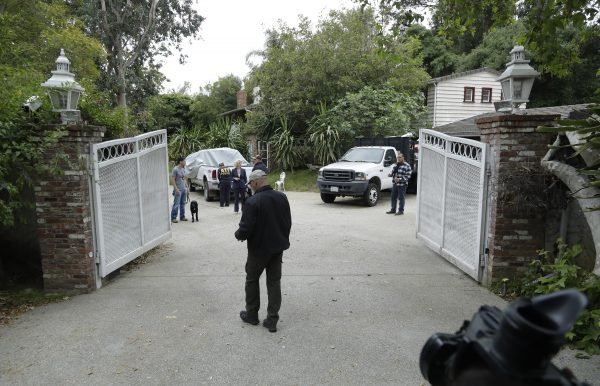 Although the amount of firepower stored in the house unnerved some neighbors, experts say it’s not illegal for someone to possess such a massive amount of weapons. However, the person is required to comply with state and federal firearms laws, said Steve Cooley, a former Los Angeles County district attorney.

“There is nothing in itself wrong with having a thousand guns. It all depends on whether they comply with California and federal laws,” he cautioned, noting that even with a federal firearms license to sell weapons, the legal aspects of doing so are very complex.

“The arrest here seems to be for some illegal assault weapons,” Cooley said.

Chuck Michel, a well-known gun rights attorney, said that having 1,000 guns isn’t that unusual for a federal firearms dealer. He said dealers often keep their own private collections and then separately keep an inventory of weapons in stock for the business.

As a federally licensed weapons dealer, a person can sell guns elsewhere that are not compliant with California’s “assault rifle” laws. The state, however, requires dealers to have a dangerous-weapons permit, Michel said.

Sometimes, he said, dealers can overlook the correct paperwork and run afoul of the law, noting that sensational search warrants with piles of guns often end up without charges.