A single-person aircraft was stopped late last week crossing the U.S.-Mexico border, where authorities found almost half a million dollar’s worth of illegal drugs.

Border Patrol seized the ultralight aircraft late Thursday near the Nogales and Tucson stations after tracking it electronically, officials said in a statement.

Agents found the plane abandoned on a rural dirt road, filled with two large plastic containers. Inside the containers were packages of more than 143 pounds of meth and more than 200 grams of fentanyl, worth about $500,000. 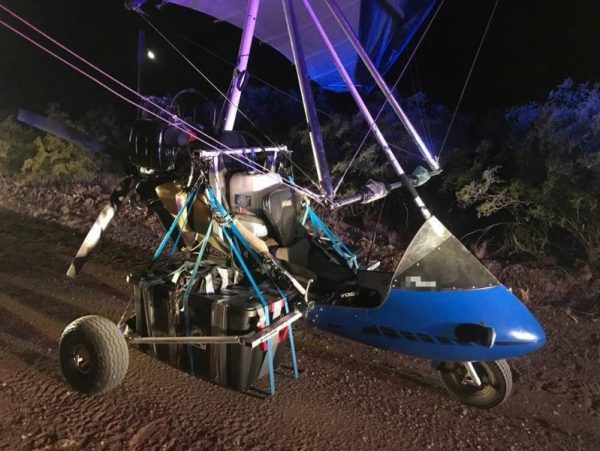 Tucson Sector Border Patrol agents assigned to the Nogales and Tucson stations seized a modified ultralight aircraft and its illicit cargo of nearly $500,000 in methamphetamine and fentanyl on May 23, 2019. (U.S. Customs and Border Protection/Released)

The pilot, however, had already fled.

Flying drugs across the border is less popular than other methods, but “transnational criminal organizations use a wide range of techniques to smuggle both humans and narcotics into the United States,” Border Patrol said in a statement.

Last year, a San Diego man was sentenced to 12 years in prison for using a remotely operated drone to smuggle 13 pounds of meth across the border.