The account was shut down last Tuesday, and NEWSREP was informed only that the account was “not following our terms” and was no longer accessible, NEWSREP said on Friday.

“Your account has been deleted for not following our terms,” said the email from Instagram to NEWSREP. “You won’t be able to log into this account and no one else will be able to see it. We’re unable to restore accounts that are deleted for these types of violations.”

NEWSREP is run by former Army Special Forces sniper Jack Murphy. The NEWSREP account with roughly 82,000 followers and 1,200 posts was wiped out without explanation.

The news company says Facebook and its subsidiary Instagram are targeting veteran groups, likely because of their accurate portrayal of war zone coverage that some may view as too harsh.

“Veteran accounts are brimming with military posts which sometimes include graphic images from overseas,” NEWSREP explained.

“Although NEWSREP doesn’t promote violence, we do our best to cover it alongside other breaking and important topics from across the world. And we don’t shy from the reality, which is often as brutal and as politically incorrect as possible. The social media giants might wish to avoid what is actually happening in the world and try to fabricate a bubble of ignorance where everything inside is nice and rosy – but we won’t,” they continued.

It’s not the first – and likely not the last – of Instagram bans or deletions of veteran content.

Avila reposted the photo with the caption, “I honestly don’t know why this picture was taken down by Instagram. Not sure what guidelines it violates But here we go again… Thank you @donaldjtrumpjr for always taking the time out your busy schedule to say hello to chat.” 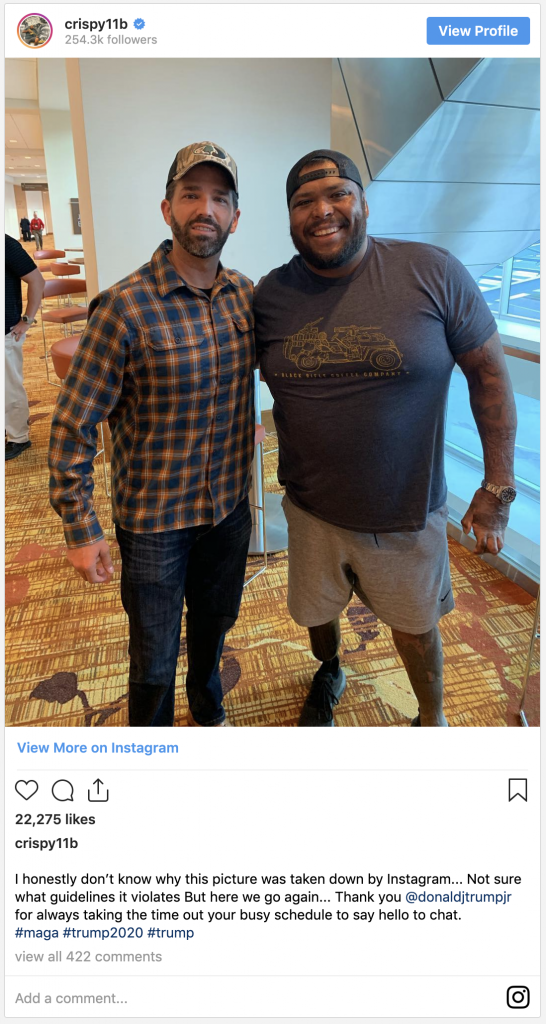 Last year, Instagram permanently banned the page of Project War Path, a clothing company owned by Navy SEAL and Army Special Forces combat veterans. The closure was attributed to “hate speech” regarding a post that criticized NFL players who kneeled as a form of protest, Breitbart News reported at the time.

The post showed a graphic depicting kneeling NFL players on ground held up by U.S. troops, along with the caption, “This sums it up, Veteran’s defend our freedom and keep us safe. Meanwhile overpaid turds throw a leather ball around in a overpriced stadium and shit on all the men and women who have been killed defending our country.”

This sums it up, Veteran’s defend our freedom and keep us safe. Meanwhile overpaid turds throw a leather ball around in a overpriced stadium and shit on all the men and women who have been killed defending our country. #ProjectWarPath #BoycottNFL #NFL #VFW #VeteransofForeignWars pic.twitter.com/6DAT3jTyOi

Only after news coverage of the ban did Instagram agree to review and repeal it.