His family found his U.S. Army medals, military mementos, pictures and other items in a box after he died.

“He was fiercely private about that time in his life, probably trying to protect us from what he had seen,” said Jolie Larsen, his oldest daughter.

Before Stewart died, he asked to be buried at Arlington National Cemetery in Washington, D.C.

Jolie, of rural Beloit, said so many of her father’s relatives are buried at Smith’s Church Cemetery in West Virginia.

“But he wanted to be buried with his men,” Jolie explained.

In May 2015, more than six months after Stewart’s death, a team of six flawlessly groomed white horses pulled a 4-wheeled caisson holding his cremated remains.

Members of the military walked alongside, and family walked behind. 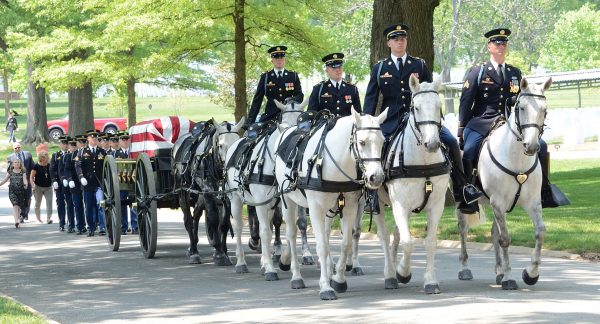 As the solemn procession passed through the arch at McClellan Gate, the only sound was the clop, clop, clop of steady hooves and the jingle of hardware on the harnesses.

“It was almost surreal,” Jolie said. “You always think a funeral like this is for someone else, not the man who raised you.”

Little did they know that a key player in the funeral was nearing retirement and soon would bless their lives.

Before her father’s burial, Jolie went on the Arlington National Cemetery website to learn more about the 3rd U.S. Infantry Regiment, the Army’s official ceremonial unit known as The Old Guard.

She stumbled onto information on how to adopt a horse from the Caisson Platoon, one of the most treasured organizations in the U.S. Army.

Since 1948, caisson horses have provided mounted funeral escorts for full-honor military funerals in Arlington National Cemetery and for special and state funerals in the nation’s capital.

Occasionally, as the horses age or have medical issues, the Army puts them up for adoption.

People seeking one of the hardworking horses must go through an extensive application process, including questionnaires, background checks and site visits by The Old Guard’s adoption board.

Jolie and Gary knew they had plenty of pasture space and room in their barn for one of these special animals.

In August 2018, they applied for 22-year-old Babe, a female Percheron/thoroughbred cross, weighing 1,400 pounds at her peak. 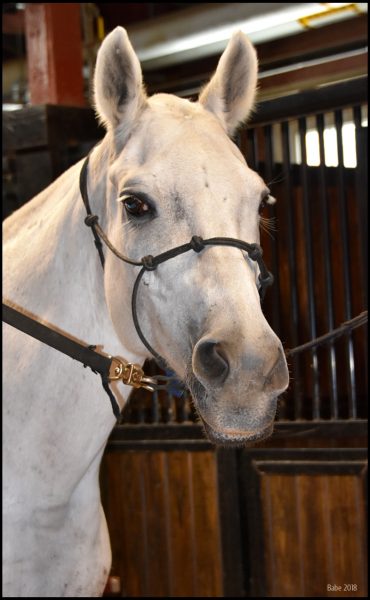 During her 19 years at Arlington, Babe honored America’s fallen by performing more than 7,600 funerals. She had been in all three positions of the caisson team: the wheel team, the swing team and the lead team.

By September, the Larsens received a letter saying they had passed the first hurdle of the screening process. Of all applications received by the Caisson Platoon, they were among the final three.

“It was such a long shot because they get applications from all over the country,” Jolie said.

Still, the Larsens returned to Washington, D.C., in October to meet Babe in person.

Jolie brought photos of her father’s funeral, hoping some of the horses who pulled his caisson were still there.

Then, something unbelievable happened.

“The soldiers from the Caisson Platoon recognized Babe right away,” Jolie said.

They identified Babe as one of the lead horses pulling her father’s caisson.

“I tried not to cry, but I could hardly speak,” Jolie said. “What are the odds I would have a chance to adopt a horse that pulled my dad to his final resting place…”

When she returned home, Jolie was more excited than ever to welcome Babe into her life.

But there was no guarantee.

The Caisson Platoon Adoption Board decides everything by an impartial vote. 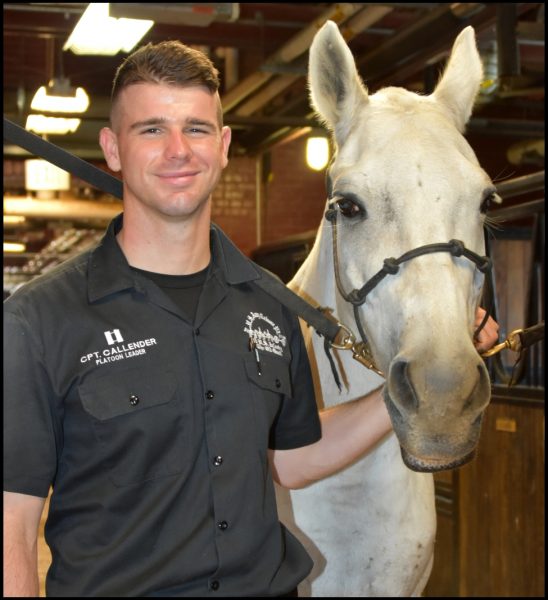 In October, a member of the Caisson Platoon and the herd manager came to the Larsen home to verify information in the application and to see if Babe would be a good fit for Jolie and Gary.

Then the waiting began.

In late November, the Larsens found out by phone that they were selected to adopt Babe.

“I cried all the way to work,” Jolie recalls.

She is a registered nurse who cares for inpatient oncology patients in Beloit.

She applies the same caring to her animals that she gives to her patients.

“I know a 22-year-old horse is not the same beast as a 10-year-old horse,” Jolie said, explaining how important it is to be vigilant about health issues with an older horse.

“After 19 years of the same routine (for Babe), I anticipated some adjustment for this incredible horse,” Jolie said. “Her whole world was going to change.”

Babe’s journey to Wisconsin involved two horse-shipping services and a stay of several days in a Lexington, Kentucky, holding facility.

Jolie has photos taken along the way of veterans posing with the big mare, who was treated like a celebrity.

As luck would have it, Babe arrived in Wisconsin during January’s record-cold polar vortex.

The big, fancy semitrailer hauling Babe promptly got stuck in fresh snow at the end of the Larsen driveway. It took several hours and two wreckers to free the vehicle.

Jolie unloaded Babe, who was wearing a blanket, in the dark with 30 mph winds lashing at them.

“That horse didn’t know me from anyone,” Jolie said. “But she followed me through knee-deep snow. She was so trusting.”

Fast forward to early May and a peaceful scene west of Beloit.

Babe galloped across an open pasture where the wind tangled the horse’s white mane and stirred up tiny whirlwinds of dirt at her hooves.

“If you didn’t know Babe’s story, and the incredible history she has seen, you might think she was just an old gray mare in a field,” Jolie said. “Hopefully, she’ll have a long and happy retirement.”

People ask Jolie why she jumped through so many hoops to apply for an aging horse halfway across the country when there are younger, “fancier” ones in Wisconsin.

“They just don’t get it,” Jolie said.

She quietly explained how much she admires all the caisson horses and how Babe in particular is a connection to her father.

Providing a home for Babe is a small way to give back to the Caisson Platoon horses who gave her father such a beautiful, meaningful sendoff.

“I am grateful for the opportunity to be a caretaker to history,” Jolie explained.

After many years of honorable work, Babe has earned the right to do “a whole bunch of nothing,” she added.

Babe will not be alone.

Jolie and Gary still cannot believe that Babe lives with them.

Gary called her the best behaved, sweetest horse he has ever known.

“It’s a great, great honor to have her,” Gary said. “She is America’s horse, and our purpose is to take care of her for the rest of her life.”

“It makes me cry at times when I think about it,” Jolie said, reaching out to stroke the mare’s mane. “Babe is the horse of a lifetime.”