A dwindling generation: WWII veteran aims to preserve the lessons of war’s horrors

Over the next 11 months, enduring scorching sun and frigid cold, 18-year-old George Ciampa and his companions from the 607th Graves Registration Company were responsible for the dead. 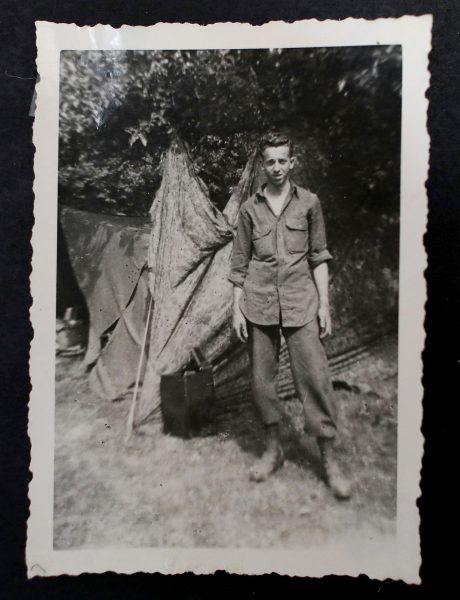 They buried the bodies of German and American soldiers. If they were lucky, they were given gloves. Across five campaigns in France, Belgium and Germany, from the Normandy invasion, through the Battle of the Bulgeacross five campaigns to the end of the war in Europe, Ciampa took stock of the fallen, recovered their personal items, put their bodies in mattress covers and buried them in temporary graves.

Eventually, a couple of weeks after the Normandy invasion, the toll of the work overcame him. He broke down.

“A lieutenant pulled out his .45 pistol and says, ‘You get your ass back out there this second,’ ” Ciampa, now 93, recalled. “We were not babied. There was a war going on, and it was going on every day.”

“It was very difficult to look at the faces, at the bodies. You kind of worked like a robot around them,” Ciampa recalled. The stench clung to his clothes. His mouth was always dry from constantly spitting.

Seventy-five years after D-Day — code-named Operation Overlord — Ciampa and seven veterans will return to Normandy in June to commemorate the invasion that broke the Nazis’ hold on France and set the stage for Europe’s liberation.

Now 93 years old, Ciampa is making a documentary to keep alive the events of a war whose horrors and heroics are remembered by a dwindling number of veterans. 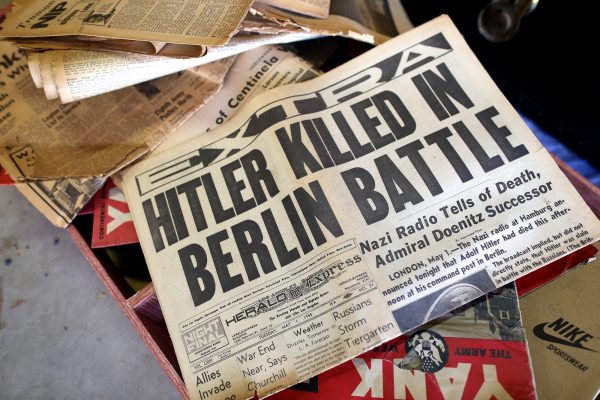 An evening edition of the Los Angeles Herald Express newspaper from May 1, 1945. (Gary Coronado/Los Angeles Times/TNS)

Every year, there are fewer WWII veterans like Ciampa. Of the 16 million Americans who served, about 496,770 were alive in 2018, according to Veterans Affairs figures collected by the National WWII Museum. Every day, on average, 348 die. And every year, young people know less about the horrors of the Holocaust. 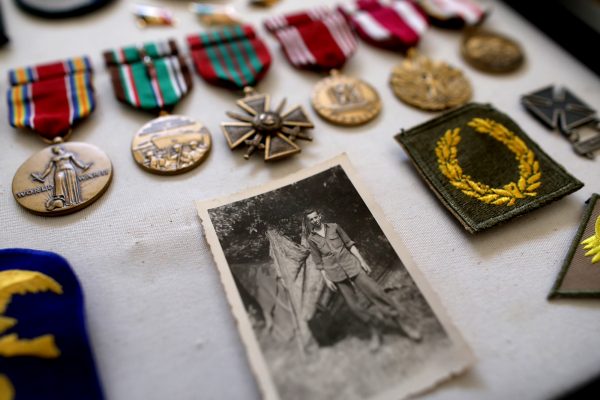 Some of the recognitions Ciampa received for his World War II service. (Gary Coronado/Los Angeles Times/TNS)

Last year, a study commissioned by the Conference on Jewish Material Claims Against Germany revealed that 66% of U.S. millennials didn’t know what the Auschwitz concentration camp was. Four out of 10 believed 2 million or fewer Jewish people were killed during the Holocaust, when the actual number is about 6 million.

It’s a historical disconnect that may have dire consequences. Hate crimes have spiked nationwide. Between 2014 and 2017, anti-Semitic attacks rose 54%, the FBI estimates.

A recent survey published by the Southern Poverty Law Center found that most incidents of hate and bias in schools are unreported and go without discipline.

Teenagers have documented themselves making Nazi salutes and posing with swastikas shaped out of red plastic cups. Last year, several Ojai middle school students lay on a field together to form the shape of a swastika.

Volker Benkert, an assistant professor of history at Arizona State University, called that behavior the “ultimate publication for attention.” As veterans, Holocaust survivors and perpetrators die, their stories will be relegated to cultural memory, he said, which have less impact than the lived experiences of individuals.

“Sending Holocaust survivors, veterans and liberators to schools has been a game changer, and we will be robbed of that opportunity very soon,” he said.

It’s as Gordon “Nick” Mueller, president and CEO emeritus of the National WWII Museum, said: “Every time a veteran dies, a library burns.”

Ciampa has made it his life’s mission to share the stories of the men and women who participated in World War II. He founded the nonprofit organization Let Freedom Ring in 2006 with the intention of reaching high school students to teach them about what he calls “the high cost of freedom.” He’s talked to thousands in the U.S., France and Belgium in the last decade.

He feels obligated to share his experiences, to explain to people what those words mean and how many 18-, 19- and 20-year-old men were killed. How many never got to have a girlfriend, get married or have children.

They’re the reason he chose to make his sixth and last documentary, “D-Day Veterans Return to Normandy — 75 Years Later.”

“I gotta talk about the guys that gave their lives, the guys who came out of it badly wounded,” Ciampa said he told himself.

Ciampa, a former Times display advertising salesman and special features manager, said people like him can do only so much.

Ciampa, who was born in Boston, didn’t talk about the war when he returned to the U.S. Not to his children. Not to his wife. The trauma was too deep, the horror too vivid. To this day, he still sees the faces of the dead.

It wasn’t until 50 years after the Normandy invasion, during his first trip back since the war, that Ciampa was ready to recount to his family what he had witnessed, or to contact others he had fought alongside.

When Ciampa returned to France, he walked alone for a while in a Normandy cemetery. Passing the white crosses and Stars of David, he wondered which graves bore the bodies of the men he recovered.

But he remembers that first day of the invasion in 1944 as if it were yesterday.

“When we got there, there was four or five thousand ships. You could see ships all around you. We could hear the Germans shooting at us, hear the shelling above us” from weapons called Screaming Mimis, he said. Overhead, they screeched before hitting ships. He remembers a tanker blowing up. Hundreds of shells loaded with explosives wailed above, day and night.

Fate, Ciampa said, is why he survived.

He returned to the U.S. on Jan. 13, 1946, and was discharged days later. With him he brought a rifle, three pistols, a German helmet and motorcycle goggles with shattered glass lenses. He also brought paratrooper knives, a bag of German money, a fragment of a shell that almost hit him. He keeps most of the items in a black storage trunk tucked in a closet in his Torrance, Calif., home.

Inside the house, in his son’s former bedroom, he keeps his more valued war possessions: appreciation certificates, honors, medals and awards, including the Meritorious Unit Commendation wreath, the Legion of Honour (France’s highest merit), and the Croix de Guerre, given by the French government to those who distinguished themselves by acts of heroism.

These days, Ciampa and his wife divide their time between their Torrance and Palm Springs homes. Day and night, the tall veteran keeps busy organizing, fundraising and preparing for his next trip to Normandy. After almost a century of life he walks with a shuffle, but his memory has not been dulled by the passage of time.

He wrote lyrics for a waltz that will be featured in the documentary. With a deep and steady voice, he sings:

“When we were here in ‘44, it wasn’t fun because it was war. Ships all around us, shelling above us, Oh Lord let us get to the shore. When we were here in Normandy, it was in France, the invasion was not planned by chance. Thousands would die here and many without fear…. Oh Lord, let us win this damn war.”