Trump tweets new ‘Game of Thrones’ picture on ‘no collusion’

After the press conference held by Attorney General William Barr doubled down on special counsel Robert Mueller’s “no collusion” findings, President Trump tweeted a “Game of Thrones”-style image of himself surrounded by a cloud of smoke. 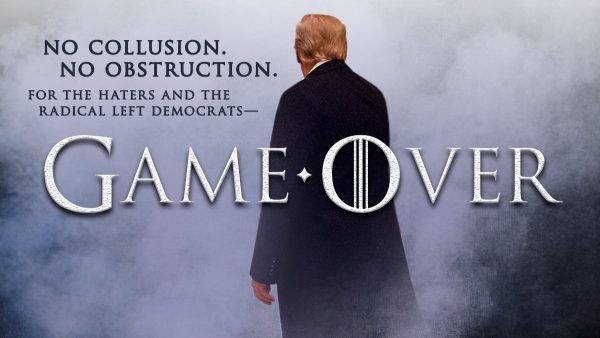 In the same font used by the series, the text said, “No collusion. No obstruction. For the haters and the radical left Democrats – GAME OVER.”

It’s not the first time Trump delivered a stark message using the “Game of Thrones” theme, despite ire garnered from the show’s fans.

Trump also used a “Game of Thrones” theme when announcing new sanctions on Iran in November 2018.

He had tweeted a photo of himself on a smoky background with the words, “Sanctions are coming. November 5.”

Trump has made numerous other remarks and tweets in anticipation of the Mueller report’s release. A redacted version was submitted to members of Congress on Thursday.

The President had tweeted earlier Thursday morning, saying, “The Greatest Political Hoax of all time! Crimes were committed by Crooked, Dirty Cops and DNC/The Democrats.”

The Greatest Political Hoax of all time! Crimes were committed by Crooked, Dirty Cops and DNC/The Democrats.

While preparing for his remarks at the Wounded Warrior Project Soldier Ride on Thursday, Trump also mentioned the report.

“I’m having a good day,” Trump said. “It was called ‘No collusion, no obstruction.’”

President Trump: “I’m having a good day, too. It was called ‘No collusion. No obstruction.’ There never was by the way and there never will be.” #MuellerReport pic.twitter.com/hi4Nc1C0nj

“After nearly two years of investigation, thousands of subpoenas, hundreds of warrants and witness interviews, the Special Counsel confirmed that the Russian government sponsored efforts to illegally interfere with the 2016 presidential election, but did not find that the Trump campaign or other Americans colluded in those efforts,” Barr said at a press conference Thursday morning.

Barr explained that the report found “no evidence of collusion or cooperation” with Russian disinformation or hacking campaigns during their interference in the 2016 Presidential election, nor did the report find any evidence that Trump obstructed the investigation.

“The White House fully cooperated with the Special Counsel’s investigation, providing unfettered access to campaign and White House documents, directing senior aides to testify freely and asserting no privilege claims,” Barr explained. “At the same time, the President took no act that in fact deprived the Special Counsel of the documents and witnesses necessary to complete his investigation.”

Barr said that it was Trump who ordered the report to be released, and his attorneys did not order any redactions, which were later made by Barr.

All but grand jury information redactions were removed in the version of the report sent to members of Congress on Thursday.