Sen. Mike Lee delivered some attention-grabbing remarks, coupled with eye-grabbing visuals, on Tuesday when he trolled the Green New Deal bill that had been on the floor for consideration.

In roughly 13 minutes, Lee pulled all the shots, including a photo of former President Ronald Reagan riding a velociraptor, Luke Skywalker riding a creature from “Star Wars,” Aquaman on a seahorse, and even a screenshot from “Sharknado 4.”

Lee began denouncing what he described as irrational fears over the climate change fervor spurred from Democrats pushing the Green New Deal.

“I’m mostly afraid of not being able to get through this speech with a straight face,” he said. “I rise today to consider the Green New Deal with the seriousness it deserves.”

With that, he introduced the painting of Reagan, equipped with a machine gun and a rocket launcher on his back, while riding a saddled velociraptor – complete with a tattered American flag. 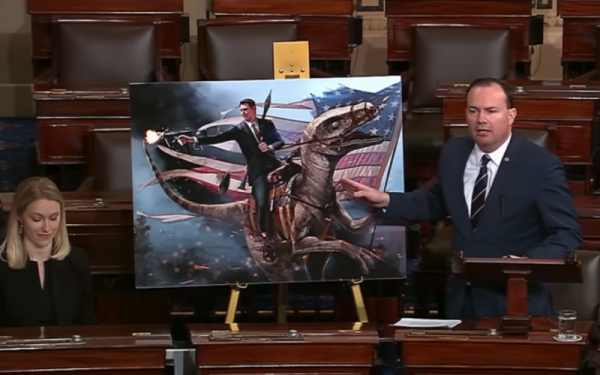 The bill is “ridiculous,” Lee said. “There isn’t a single serious idea here. Not one.”

Lee then focused on the bill’s eradication of airplanes, asking how Alaska’s citizens would trek the state’s vast expanses during winter.

“I’ll tell you how. Tauntauns, Mr. President,” he said, referring to the Star Wars creature ridden by Luke Skywalker. 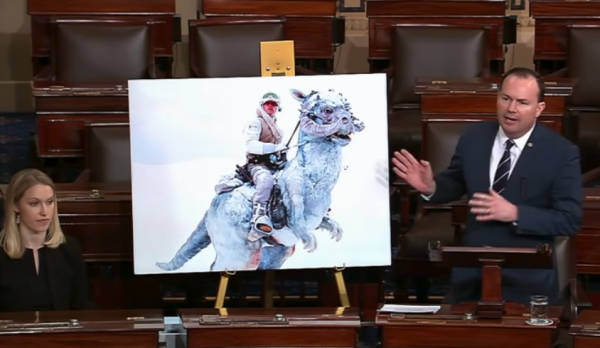 “Not only are tauntauns carbon-neutral, but according to a report a long time ago and issued far far away, they may even be fully recyclable,” he continued.

He then asked how Hawaii residents would travel between the mainland when the Green New Deal prohibits airplanes.

“All residents of Hawaii would be left with is this,” he said, pointing to a photo of Aquaman riding a seahorse. 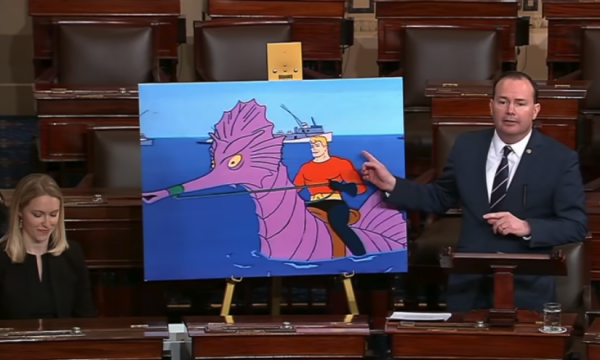 “Under the Green New Deal, this is probably Hawaii’s best bet,” he said. “I’m the first to admit that a massive fleet of giant, highly trained sea horses would be cool – it would be really, really awesome – but we have to consider a few things. We have no idea about scalability or domestic capacity in this sector,” he continued.

“The last thing we want is to ban all airplanes and only then find out that China or Russia may have already established strategic hippocampus programs designed to cut the United States out of the global market,” he said.

Next was the Green New Deal’s elimination of cattle, which Lee says would get rid of America’s 94 million cattle. 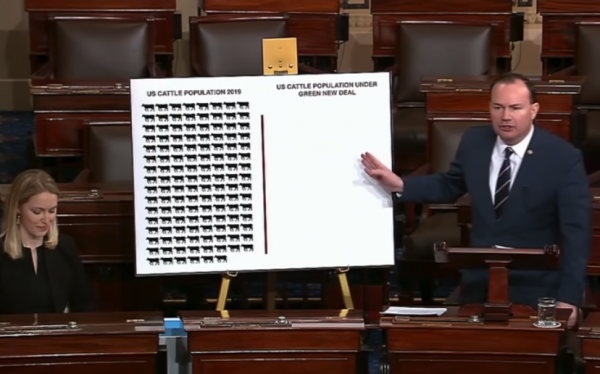 “I visited some farms to find out for myself what Utah’s own bovine community might think of the Green New Deal,” Lee explained. “Every cow I spoke to said the same thing: boo.”

When it seemed like Lee would switch to a serious note, he brought out Sharknado.

“In 2016, as viewers of the SyFy network will well remember, when climate change hit home in Utah. When our own state was struck not simply by a tornado, Mr. President, but a tornado with sharks in it,” he said. 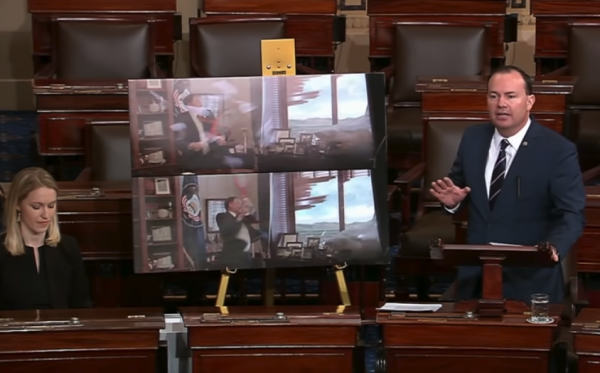 “These images are from the indispensable documentary film ‘Sharknado 4,’” he said, describing the scene of the fictional governor fighting off a shark with a tennis racket.

Lee set the jokes aside for the remaining three minutes of his speech, explaining that the solution for climate change lies in more people with greater markets for innovation.

The Green New Deal bill failed in the Senate on Tuesday with all 43 Democrats voting “present.” Democrats plan to introduce climate change measures in several smaller bills, The Hill reported.