The Seabees, or U.S. Naval Construction Battalions, were founded in 1942 when then Rear Adm. Ben Moreell saw a need for a militarized construction force. Moreell was chief of the Bureau of Yards and Docks at the time.

While the Seabees job entails construction, they can also be called on to fight, either accompanying another branch or in defense of their construction projects in the field.

The Seabees were formed after the attack on Pearl Harbor, and are part of the Naval Construction Force under the U.S. Navy. 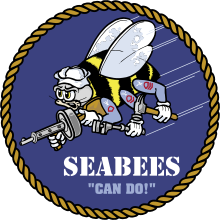 Their nickname “Seabees” comes from the first initials of their formal name, Construction Battalions – or “C” and “B.”

Naval Construction Group One is based in at Naval Base Ventura County (NBVC) in Port Hueneme, Calif.

According to the Navy: “NBVC provides airfield, seaport and base support services to fleet operating forces and shore activities, offering a unique combination of mission capabilities to the Navy and the Department of Defense. NBVC and its tenants directly employ more than 19,000 military and civilian personnel and is the largest employer in Ventura County. Located near Ventura on the California Coast, the area enjoys mild year-around temperatures. The climate is mild during summer when temperatures tend to be in the 60’s and cool during winter when temperatures tend to be in the 50’s. The warmest month of the year is August with an average maximum temperature of 73, while the coldest month of the year is December with an average minimum temperature of 45.”

According to the Navy:

The NCGs also provide the required engineering support our Navy and nation needs to construct and maintain base facilities, to repair battle damaged facilities, to conduct defensive operations as required, and to meet disaster preparedness and recovery missions.

The Navy’s oldest systems command is the Naval Facilities Engineering Command, formed in 1842. The Navy Civil Engineers Corps was formed in 1867 after the Civil War.