Two men were rescued from a sinking commercial fishing vessel three nautical miles south of Fishers Island on Sunday morning, according to the U.S. Coast Guard.

The two men, who were not identified but were aboard a boat named “All For Joy” and based out of Hampton Bays, issued a distress call about 7:30 a.m., according to a news release issued by the U.S. Coast Guard Public Affairs Detachment.

The 55-foot vessel was taking in water in one of its fish holds and the two men donned survival suits, which Coast Guard Petty Officer 3rd Class Steven Strohmaier said can keep their bodies warm and add some buoyancy should they be forced to jump in the water. The boat continued to travel northwest toward Fishers Island amid 8- to 10-foot waves. The island is 11 miles off the North Fork, closer to Connecticut.

A Coast Guard crew from Montauk arrived about 8:20 a.m. and escorted the boat until a crew from Station New London arrived about 9:15 a.m. aboard a 45-foot medium response boat. The Montauk crew then returned to port.

The New London crew passed a dewatering pump to the two men, but it was not able to keep up with the flooding. The men jumped overboard about 9:30 a.m. and were quickly pulled aboard the Coast Guard vessel.

“They jumped into the water and the Coast Guard boat safely came alongside them,” said Strohmaier, adding that the crew pulled the men through a port.

The boat capsized within a minute of the two men abandoning it, according to the news release.

The pair were taken back to the Coast Guard New London station but required no medical treatment. A photo taken after the rescue shows the two men shoeless and looking weary, with one shaking hands with a crew member. 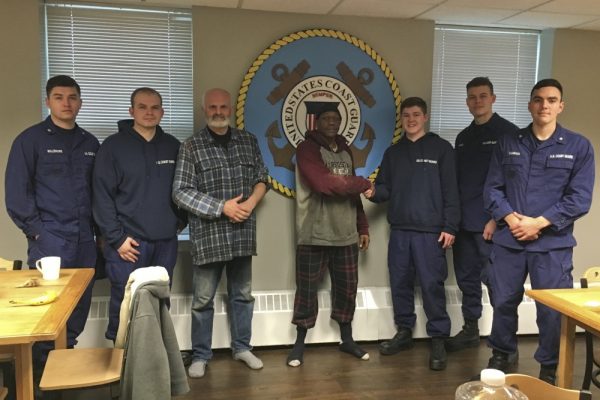 “This incident highlights how critical it is to have appropriate safety gear, emergency radio beacons, life jackets, and survival suits,” Lt. Cmdr. Jesse Diaz, search and rescue mission coordinator for Coast Guard Sector Long Island Sound, said in a news release. “Anything can go wrong at sea, even if you’re a professional mariner. The safety gear saved the lives of these crew members today.”