Program Executive Office Soldier officials presented Staff Sgt. Steven McQueen with his damaged Enhanced Combat Helmet during a ceremony on Fort Belvoir, Va., March 3, 2019. During the insider attack on Sept. 3, 2018, McQueen was struck in the back of the helmet at a distance of about 20 feet. The helmet protected him from the shot, and he was able to recover and help secure the team's position. (Devon L. Suits/U.S. Army)
March 07, 2019 Cheryl Hinneburg
Share
Tweet
Flip

An Army staff sergeant who took shots to the head by an enemy machine gun in Afghanistan has revealed the helmet that saved his life.

Staff Sgt. Bryan McQueen was among a large group of soldiers and Afghans in route to a daily security meeting when gunfire sprayed the area, according to Army Times. He was struck and thrown to the ground but was able to get right back up.

At the time, he asked, “Did these (expletive) really just shoot me in the head?” They had, and McQueen was saved by his helmet, which was practically shredded — but not fully pierced — by the 7.62x54mm round fired from a truck-mounted machine gun.

It was discovered that the attack was planned by bad Afghan cops, one of which began firing a Russian PK machine gun, and the other an AK-47.  Their goal was to take out as many soldiers as they could.

The pair were identified and arrested for murder and attempted murder. They currently await trial.

During a Personal Protective Equipment soldier return ceremony held this week, McQueen’s helmet, which was mounted to a display plaque, was presented to him. 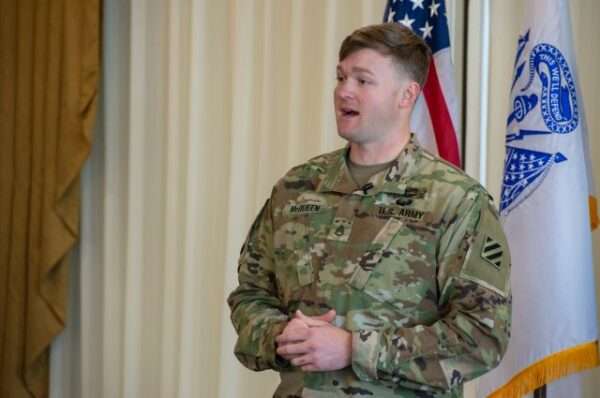 These types of ceremonies were approved by Congress in 2013 so that soldiers can reclaim their property after it has been investigated and analyzed. There has not been a ceremony since 2016.

Lt. Col. Ginger Whitehead, product manager for Soldier Protective Systems, said, “There is no doubt that Staff Sgt. McQueen would not have survived that impact had he not been wearing that helmet.”

Whitehead said the new helmets that will be used by the Army are stronger and more lightweight.

But his tone has since changed. He said, “This helmet works and I’m a living testament to it.” 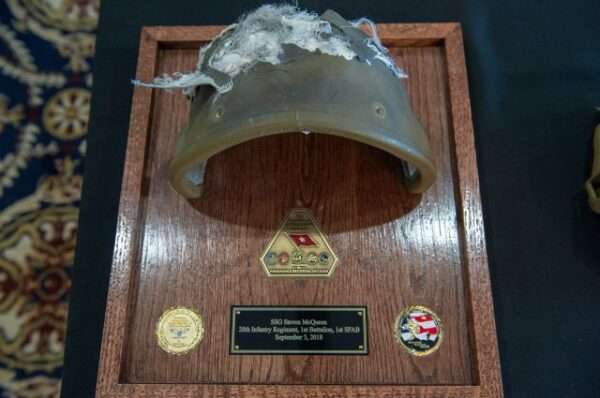 Program Executive Office Soldier officials presented Staff Sgt. Steven McQueen with his damaged Enhanced Combat Helmet during a personal protective equipment return ceremony on Fort Belvoir, Va., March 3, 2019. During the insider attack on Sept. 3, 2018, McQueen was struck in the back of the helmet at a distance of about 20 feet. The helmet protected him from the shot. McQueen quickly recovered and helped secure the team’s position. (Devon L. Suits/U.S. Army)

The hardest part of the whole thing was when McQueen had to tell his wife what happened.

“I sent her a text,” he said. His first question to her was if anyone from the unit’s Family Readiness Group had reached out to her. When she said no, he told her what had happened.

“I’m in the hospital in Kabul. I’m fine but I got shot in the head,” he texted.

Later, when his wife was asked what she thought when she saw her husband’s helmet, she replied, “I knew it was bad, I knew he had been shot. I was in shock when I saw it. If he wouldn’t have had it on, then he wouldn’t have come home.”