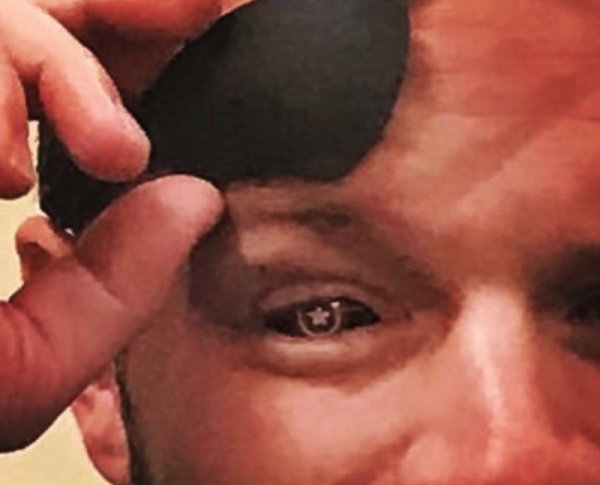 “A VERY cool use of vibranium,” Evans tweeted in response.

A VERY cool use of vibranium https://t.co/zv5L9hqqTl

The reason for Evans’ trip to Capitol Hill was not clear, although he met with several other members of Congress who also appeared in photos on his Twitter page. Evans was also spotted on Capitol Hill last month, and was reportedly working on a project he was unable to discuss, the Boston Globe reported at the time.

Crenshaw, a former Navy SEAL, was injured and blinded in an IED explosion in Afghanistan in 2012, causing him to lose his right eye. He has since worn an eyepatch, which has been a fixture of his image and has garnered media attention – especially after it became the focus of a comedy skit on Saturday Night Live.

The two later met, and Davidson apologized for the joke. Davidson also let Crenshaw make a few jokes about him in the style of the “First Impressions” sketch.

At last month’s State of the Union address, Crenshaw debuted an eyepatch that featured the Navy SEAL Trident.

In 2012, Crenshaw was serving on his third deployment in Afghanistan’s Helmand province when a 15-pound IED exploded before him, killing his interpreter. He was left injured and blinded, and his treatment included a five-day medically-induced coma. When he awoke, his right eye was gone, and doctors weren’t sure he’d regain the sight in his left eye.

Numerous surgeries helped Crenshaw regain his eyesight, and he later deployed again to the Middle East in 2014 and to South Korea in 2016.

Crenshaw medically retired in 2016 after serving 10 years as a Navy SEAL and achieving the rank of lieutenant commander. He has received two Bronze Stars, a Purple Heart, a Navy Commendation Medal with Valor and several other recognitions.