Navy football lost one of its legends Thursday when Joe Bellino died in his home state of Massachusetts at the age of 81. Bellino, the 1960 Heisman Trophy winner as a standout halfback for the Midshipmen, had been in failing health for some time.

Bellino was nicknamed the “Winchester Rifle” – a reference to his hometown and high school as well as his explosive running style. He was described by one newspaper reporter as “the player who was never caught from behind.”

He starred at Navy from 1958-1960 under head coach Wayne Hardin, rushing for 1,664 yards on 330 carries and scoring 31 touchdowns during his three-year career. The 5-foot-9, 185-pound speedster was also a dangerous return man and amassed 577 yards on kickoffs and 256 yards on punts.

In 1960, Bellino rushed for 834 yards and 17 touchdowns and added 17 receptions for another 280 yards while leading Navy to a 9-2 record. After beating archrival Army 17-12, Navy earned an invitation to the prestigious Orange Bowl – losing 21-14 to Missouri on Jan. 2 in Miami.

Bellino was limited to just four years on eight carries in the Orange Bowl, but scored Navy’s second touchdown off a spectacular catch of a pass from Hal Spooner — performing a somersault out of the end zone.

A unanimous All-America selection, he was awarded the Heisman Trophy and Maxwell Trophy in 1960. It was an era when football players went both ways and Bellino was also an outstanding defensive back, recording an end zone interception to preserve Navy’s narrow victory over Army that year. 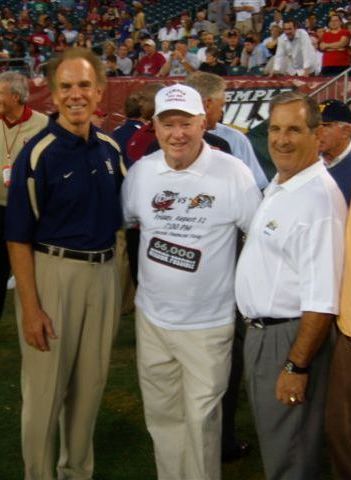 Retired Adm. Ed Straw was a classmate and close friend of Bellino’s. Straw could not sleep and went on Facebook around 4 a.m. Friday, spotting a post about Bellino’s passing.

“I couldn’t believe it and I was devastated. I’m very, very sad. My heart is broken,” Straw said. “Joe was the finest gentlemen I’ve ever known. This man had no ego and treated everyone like he’d known them for 10 years. This is an incredible loss to his friends, family and classmates.”

Tom White was a varsity basketball player at Navy and roomed with Bellino in Bancroft Hall for two years. Those two men, who were fellow members of the 20th Company all four years at the academy, remained good friends throughout their lives.

“Joe was an incredible role model for the entire Naval Academy and what it means to live an honorable, ethical life,” White said. “Joe was the same person from the time I met him plebe year until the end. He never changed. Joe treated everyone with respect, regardless of their position in life.”

One of the most oft-repeated stories about Bellino’s exploits involved a 50-yard touchdown run against Boston College in the 1959 season opener. As Bellino crossed the goal line, he began to limp and fell to the ground.

Navy fans in attendance at Alumni Stadium in Chestnut Hill looked on anxiously, thinking the star runner had suffered an injury. It turned out the Midshipmen were wearing new knee-length socks for the first time that day and they were extremely tight.

Bellino, whose calves were as thick as some men’s thighs, had his circulation cut off by the elastic rims at the top of the stockings and his feet had turned blue. Navy trainers had to cut off the top of the socks to allow Bellino to continue to play that day.

Also a standout baseball player, earning three letters as a catcher and outfielder at Navy. In 1959, he batted .428 and led the Eastern Intercollegiate League in stolen bases. He posted a .320 average in 1960 and served as team captain as a senior in 1961.

Bellino had scored three touchdowns to spearhead Navy’s 43-12 rout of Army on the gridiron in 1959 then delivered similar exploits on the diamond the following spring. He went 4-for-4 with three RBIs and two stolen bases while throwing out two runners as Navy hammered Army 9-1 during Commissioning Week.

He capped his senior year by winning Navy’s top two athletic awards – the Thompson Trophy and the Naval Academy Athletic Association Sword, marking the first time in 41 years that one midshipman received both honors.

Bellino’s No. 27 jersey was retired following the 1960 season and he was selected in both the NFL Draft (17th round by the Washington Redskins) and AFL Draft (19th round by the Boston Patriots) in 1961.

A native of Winchester, Massachusetts, Bellino elected to play for his home state squad and spent three seasons with the Patriots (1965-67) as a kick returner. Because of his five-year military commitment, Bellino remains the lowest drafted Heisman Trophy winner in NFL history.

Bellino served 28 years in the Navy and Naval Reserve, retiring with the rank of captain. He was inducted into the College Football Hall of Fame in 1977.

During its annual season-ending football banquet, Navy presents the Joe Bellino Award to the varsity football player whose inspiring on-field performance made a significant impact on the team and contributed to its overall success during the season.

The Bellino Auditorium in Ricketts Hall is named in honor of one of Navy’s finest two-sport athletes. In 2009, Bellino was selected to the Navy-Marine Corps Memorial Stadium all-time team.

He spent four decades working in the auto leasing and auction industry and was a longtime member of the Board of Directors for Northern Bank and Trust, based in Woburn, Mass.

Bellino’s son John is a 1989 graduate of the Naval Academy while his daughter Therese is a public school teacher in Cambridge, Massachusetts.