A soldier assigned to the 173rd Airborne Brigade who was found dead in his Camp Ederle barracks Sunday morning has been identified. 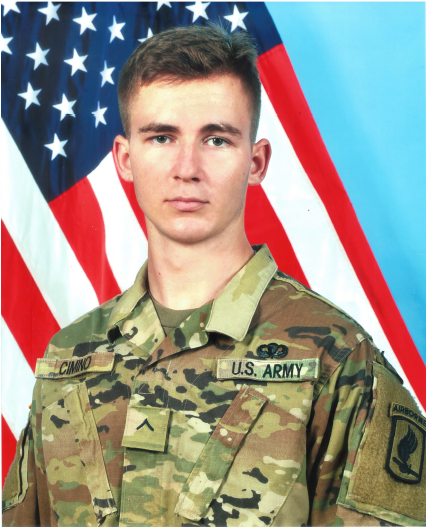 The cause of death has not yet been determined, however, the initial investigation did reveal that drugs and alcohol were in his barracks.

Brigade spokesman Maj. Christopher Bradley said, “Our condolences go out to Peter’s family and friends. The entire U.S. military in Vicenza is deeply saddened by the loss of one of our own.”

Cimino is survived by his parents and a sister.

The soldier is the second in five months and the third in less than a year to be found lifeless in barracks rooms on Caserma Ederle. https://t.co/tdQIVPuCtZ

Cimino’s death is troubling since he is the third soldier to die in the barracks at Camp Ederle — located in Vicenza, Italy — in less than a year.

Sgt. Kevin Connor, 24, was found lifeless in October in the Camp Ederle barracks. It was suspected that he died from alcohol poisoning or aspiration. Italian EMS were unsuccessful in attempts to revive him.

Connor, who was from Texas, spent the night before his death watching football and drinking at the base bowling alley at Camp Ederle military complex, according to Army Times.

His fellow soldiers said that he got so intoxicated he couldn’t walk on his own.

Staff Sgt. Krasean Clayborn, 36, was also found deceased in his Camp Ederle barracks in June after he did not show up for work. Clayborn’s cause of death was not disclosed.

At the time of his death, his wife had just found out she was pregnant with twins. Clayborn was a popular DJ in Europe, known as DJ Legend, Fox News reported.

In Aug. 2017, fellow soldiers found the body of 21-year-old infantryman Pfc. Andrew Young in his Camp Ederle barracks. Army officials declined to disclose Young’s cause of death, although they said there was no sign of foul play.

Young had received the Army Service Ribbon, National Defense Service Medal, Global War on Terrorism Service Medal and the Army Parachutist’s Badge. He was posthumously awarded the Army Good Conduct Medal, according to the Army Times.