A World War II drone engine made by a Herkimer company is operating once again thanks to a former area man.

Jack Beetz, formerly of Whitesboro, now living in Illinois, near St. Louis, Missouri, discovered the small two-cycle gas engine aircraft, made by Herkimer Tool and Model Works, in an antique store in Alton, Illinois. The eight-horsepower two-cylinder, two-propeller engine was still attached to the military drone airplane for which it was designed. The aircraft, attached to a 12-foot wingspan aerial gunnery drone, was used to train World War II gunners to shoot down enemy aircraft. The propellers turn in opposite directions to keep the radio-controlled airplane level in flight.

The drones are a rare find for individuals, according to Beetz. The few that have been restored are in museums explaining their history. But this 75-year-old plane and engine had never flown and he wanted to see it come to life.

Beetz, a retired Delta Air Lines pilot and former U.S. Air Force fighter pilot who learned to fly at the Oneida County Airport in the 1960s, painstakingly took it apart and refurbished each part, working on the project through much of last year. He recently was able to start it using all the original equipment and believes it was the first time it was started since the Herkimer factory run.

Beetz has attended air shows with his Herkimer engine and drone combination educating those interested about its history. He plans to attend several more shows this year.

He is interested in connecting with local residents who can share a story of a family member involved in the production of the engines or who know of any additional engines in the area. He can be contacted at [email protected]. Beetz grew up in Whitesboro and noted his parents lived there until their recent death.

During the war the small engines, designated the 2-GS-17, were originally designed by the Righter Motor Company in Burbank, California, he explained in an email. As the war dragged on the company couldn’t keep up with production, so other sources of production were sought. The Herkimer Tool and Model Works manufactured these engines under government contract from 1943 until the end of the war. Dozens of other area companies were also involved in producing the parts.

As an aside, Beetz noted Norma Jean Mortenson, later known as Marilyn Monroe, once worked in the California engine factory producing the same drone engines. 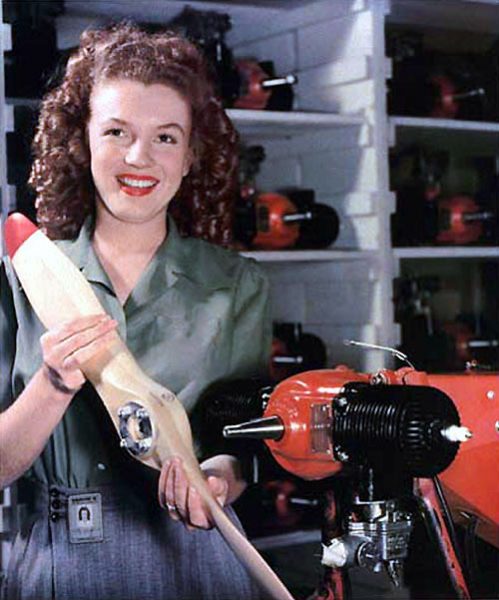 The two-cylinder, two-cycle air-cooled 26-pound engine, featuring a unique gearbox to rotate the two propellers in opposite directions, was attached to a target drone. Designated the OQ-2, it was the first mass-produced radio-controlled drone used by the military. It could fly for an hour and be recovered by parachute if it wasn’t destroyed by the gunnery trainees. Beetz’s restored Herkimer engine was attached to a drone produced by the Frankfurt Sailplane Co. in Joliet, Illinois. The drones simulated an enemy aircraft because of the speed and distance from the gunnery students.

“It was a valuable training aid that resulted in saving many lives during the war,” he said.

He referred those interested in the history of the Herkimer company and its engine and toy products to the website, OKEngines.com.

An online article on the history of Herkimer Tool & Model Works by David Burke notes the company was established in 1921 by Charles Brebeck and produced a wide array of engines for the model toy aircraft industry as well as doing manufacturing work on the Righter engines used to power U.S. Army target drones in World War II. Walter Righter teamed up with movie actor Reginald Denny to produce four variants of the drone engines, one of which was produced in Herkimer. The Herkimer-based company continued to manufacture model engines until about 1965, after which it reverted to subcontract machining.

In 1960, the plant relocated to its current address on Marginal Road and expanded. In 1973, Ellis Green purchased the business and changed the name to Herkimer Tool and Machining Corp., according to the company’s website. He also reinstated the production of model railroad cars under the OK trade name. In 1997, this division was sold to Ted Brebeck, the founding owner’s grandson, who resumed production of some of the gas engines.