A Jeep sits atop a makeshift ramp on a border fence in a remote area of the Sonoran Desert. (U.S. Customs and Border Protection/Released)
February 18, 2019 Perla Trevizo - The Arizona Daily Star
Share
Tweet
Flip

Close to a dozen people carrying bundles of marijuana fled back to Mexico on foot when their Jeep Cherokee got stuck atop the border fence in a remote area of the Sonoran Desert.

Mexican officials sent military personnel to the area Wednesday to search for the group, but neither the 11 people who had been inside the Jeep, nor the marijuana, was found, the U.S. Border Patrol said in a news release.

U.S. agents patrolling a stretch of desert spotted tracks from an off-road vehicle on protected land in Cabeza Prieta National Wildlife Refuge about 4 miles north of the international border, the news release said.

The agents couldn’t see the vehicle, but asked an Air and Marine Operation helicopter crew for help. That crew was able to spot the camouflaged Jeep Cherokee heading back south to the border to escape. The Jeep had been modified and painted to blend into the desert landscape.

The Jeep got stuck when its driver tried to take it across a makeshift ramp placed atop the border barrier, a fence made of posts and rail usually about waist high. 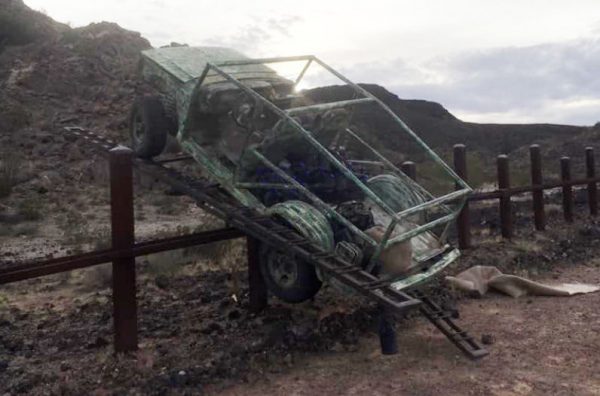 A Jeep sits atop a makeshift ramp on a border fence in a remote area of the Sonoran Desert. (U.S. Customs and Border Protection/Released)

“The agents were on their tail and the helicopter was able to see them, but ground agents weren’t able to make an apprehension because they were ahead of them,” Border Patrol agent Daniel Hernandez said.

The pursuit did result in keeping the drugs from getting into the United States, he added.

While it is not extremely common, this is one of the methods used to smuggle drugs. Border Patrol agents have a name for it: the ramping method. In 2012, a photo made national news of a silver Jeep Cherokee stuck atop a 14-foot fence as it tried to cross a downside portion of a ramp in the Yuma Border Patrol sector.