A Navy SEAL has been held in jail and mistreated for nearly six months, including insufficient access to legal counsel and medical care, and now a fellow SEAL and member of Congress is calling for his release ahead of the trial.

Texas Rep. Dan Crenshaw is asking his Congressmen and -women to sign a letter requesting that the Navy release SEAL Chief Eddie Gallagher from pre-trial confinement. Gallagher has been jailed since Sept. 11, 2018, ahead of his trial in May.

The draft letter that he will send is intended for Rear Adm. Yancy Lindsey, who is Commander of Navy Region Southwest and the convening authority over Gallagher’s case with the power to release him from pre-trial confinement. The trial was recently delayed to May 28. If Gallagher isn’t released from the brig before then, he will have been in jail for nearly nine months prior to his trial – and that’s simply not acceptable, Crenshaw said.

“The key tipping point here was pushing the trial date back three months. Everyone deserves their time in court in a timely manner,” Crenshaw told American Military News.

Crenshaw will request that Gallagher, who is charged with murder of an already fatally wounded ISIS terrorist, be moved to base confinement instead of being confined at Naval Consolidated Brig Miramar in San Diego, according to his draft letter, which his office noted is not finalized yet.

“To confine any service member for that duration of time, regardless of the authority to do so, sends a chilling message to our war fighters and is contrary to our Constitutional system of innocent until proven guilty,” Crenshaw writes in the letter to Lindsey. “As a result, we are respectfully requesting that he be released to properly prepare for trial, receive medical treatment, and see his family.”

So far, there are 10 confirmed signers of the letter, according to Andrea Gallagher, Eddie’s wife, who has been posting on social media for the public to contact their elected representatives and encourage them to sign Crenshaw’s letter. The deadline is Friday, March 1.

💥💥 MUST WATCH 💥💥@petehegseth has been calling it like it is from the beginning and this interview on demand @foxnation has some amazing points from Pete & Rob O’Neill @mchooyah 🇺🇸🦅🗣 • • It’s time to wake up AMERICA & STOP 🛑 TAKING A KNEE 💯 • • You have✌🏻 2️⃣ DAYS LEFT- TO FREE EDDIE!!!🇺🇸 ➡️ http://bit.ly/HELP-FREE-EDDIE {LINK IN BIO 🔗🔝} • 🔻This week, Congressman Dan Crenshaw’s office is circulating a letter asking for Eddie to be RELEASED from Pretrial Confinement at the Brig at Miramar. • 🔻How YOU can help FREE EDDIE! ~ Contact your Representative and ask them to sign on to Congressman Dan Crenshaw’s letter!! • 🔻Find out who your representative is and how to reach them here ~ https://www.house.gov/representati…/find-your-representative • 🗣Tell your Rep they MUST sign onto this letter by Friday March 1st! ~ All your Representative needs to do is contact Kenneth Depew at Rep Crenshaw’s Office @ [email protected] to sign on!✍🏻 • 👊🏻Pressure your representative to TAKE ACTION and DEFEND the rights of Chief Eddie Gallagher! And don’t just call or email once~ Do it EVERYDAY this week until they agree to sign on! ✍🏻 • 💥💥>>> DEADLINE IS THIS FRIDAY MARCH 1st 2019 <<<💥💥 • 🤬Eddie’s constitutional rights have been violated and denied again and again in this broken process! Eddie deserves/needs access his legal council, medical care, and to see his family. To lock a war fighter up like this for 9 months before he even has a chance to prove his innocence is INSANE!😱 • 🔻Congress MUST weigh in and we the people can HELP FREE EDDIE!!! We must FIGHT for Eddie as he has FOUGHT for us AMERICA! Our goal is 30+ members of Congress to sign on and we are already a third of the way there with 10 CONFIRMED SIGNERS! ✍🏻 • CONFIRMED SIGNERS: • Brian Babin Dan Crenshaw Matt Gaetz Louie Gohmert Paul Gosar Duncan Hunter Steve King Ralph Norman Michael Waltz Ron Wright 👏🏻🙏🏻✍🏻🇺🇸🙌🏻 Again, the process is easy – call or email your member of congress and ask they sign on to Rep. Crenshaw’s letter to HELP #FREEEDDIE 🇺🇸 Thank you for your support and your action, Andrea Gallagher & Sean Gallagher

Their goal is to get 30 elected officials to sign onto the letter before sending it to the Navy, Andrea said.

“It means a great deal to our family that a SEAL veteran in Congress – someone who has seen the likes of combat that Eddie has lived through for eight tours – recognizes the injustice taking place against an American hero,” Andrea told American Military News on Thursday. “Rep. Dan Crenshaw has stepped up, along with Rep. Duncan Hunter and Rep. Ralph Norman, to lead a movement in Congress demanding action be taken on Eddie’s case.”

Rep. Hunter, a former Marine officer and combat veteran of both the Iraq and Afghanistan wars, has been extremely vocal about Eddie Gallagher’s confinement and mistreatment in the brig. He recently told American Military News that Eddie’s is a case of “prosecutors gone wild” in the U.S. Navy.

“[The prosecutors are] treating our military guys, especially our Special Operators, like policemen as opposed to realizing they’re in a war zone,” Hunter said. “Now he’s being second-guessed. […] He’s being held in the sex-offender brig. We’re talking about a decorated 20-year Navy SEAL.”

“They see what is plain as day: the treatment being afforded to a decorated war fighter of the highest regard who will be jailed for nine months before his day in court is abysmal and Un-American,” Andrea said. “They’re demanding the immediate release of Eddie from Pre-trial Confinement so that he can receive proper medical care, have access to legal counsel, see his family and be afforded the Constitutional rights he deserves in this country of due process, innocence until proven guilty.”

Gallagher has been “improperly confined,” Crenshaw says in his letter, pointing out that a 19-year decorated warrior is being held with convicted sex offenders, and that his retributive confinement is more “punishment” rather than a necessary measure, as the Uniform Code of Military Justice (UCMJ) allows for other measures prior to utilizing confinement.

Gallagher has also been mistreated, Crenshaw says, based on information reviewed by his office. He is “deprived of adequate food, heat, hygiene, medical care and sufficient access to legal counsel typically given to others awaiting trial,” Crenshaw’s letter reads. 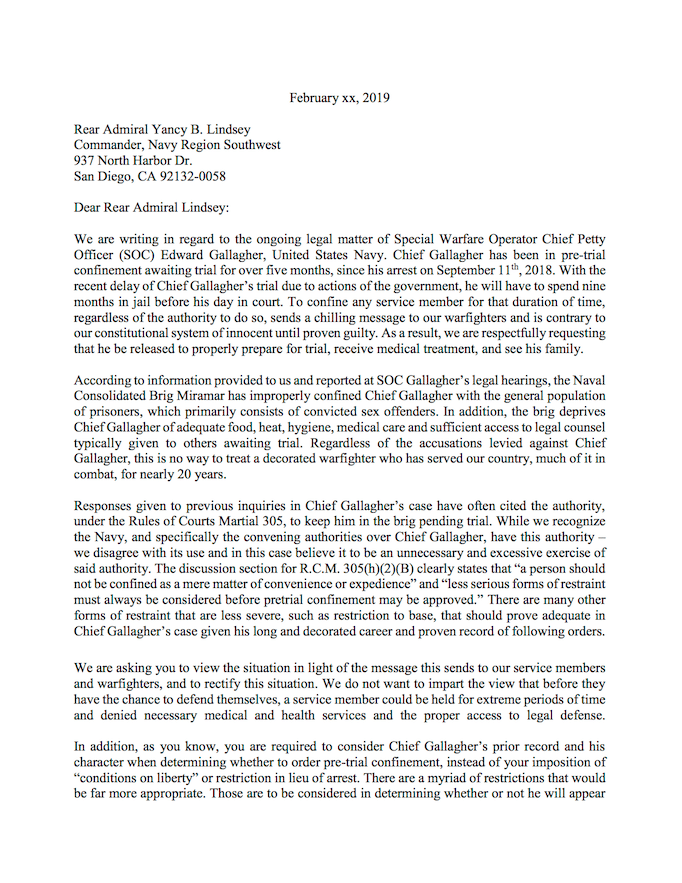 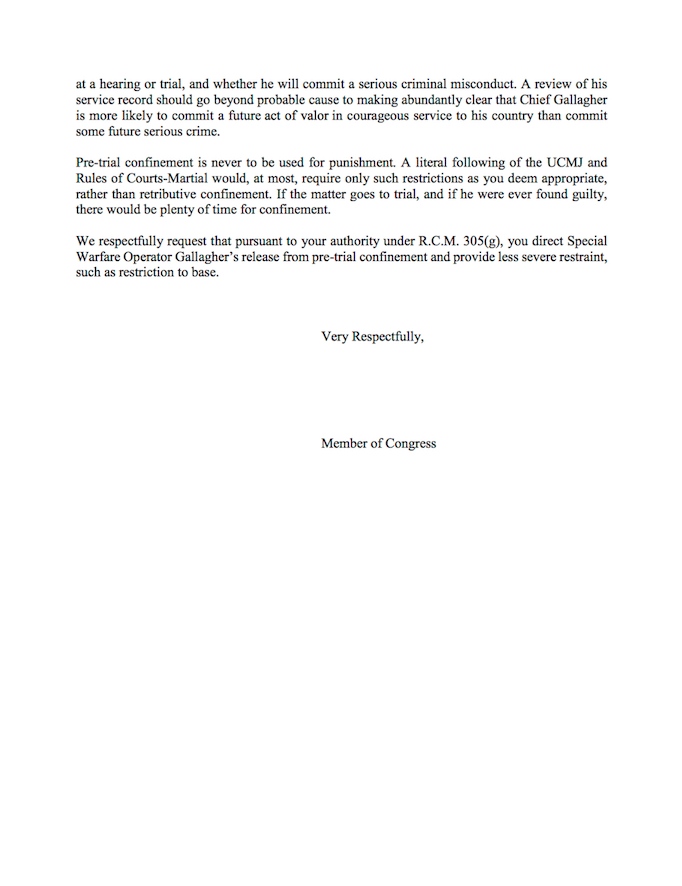 In his letter to colleagues, dated Feb. 19, Crenshaw says, “My letter asks authorities to no longer hold Chief Gallagher’s liberty and freedom hostage by moving him to less restrictive pre-trial conditions, specifically from confinement in the brig to confinement to base.”

This is his letter: 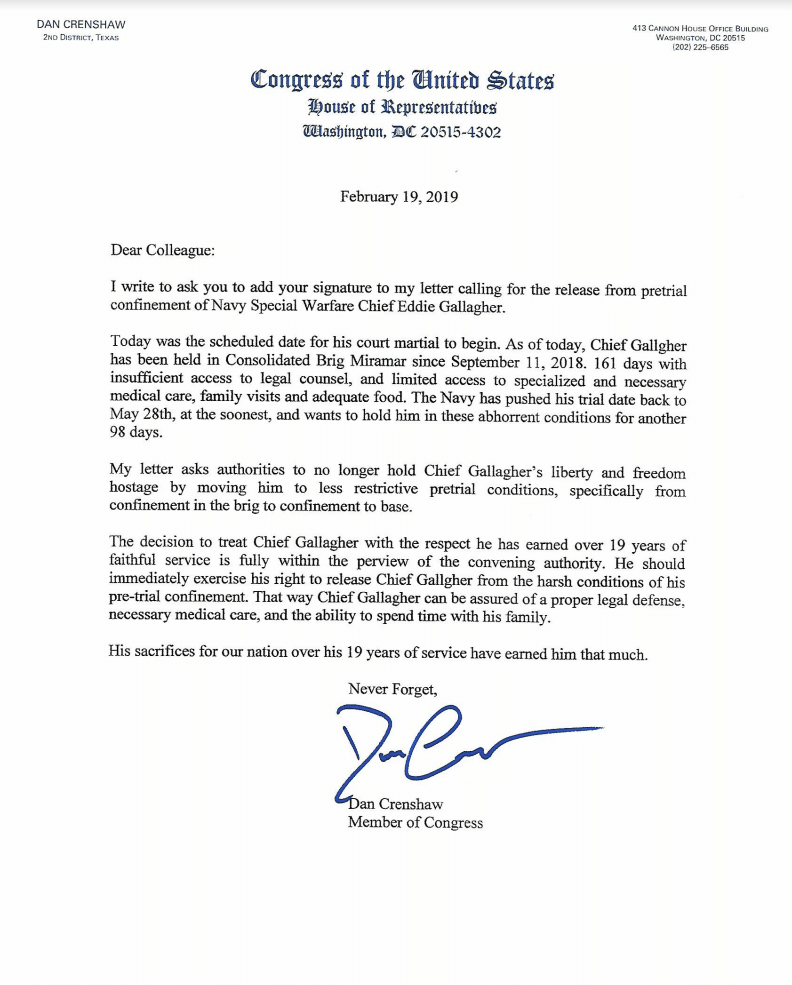 Rep. Dan Crenshaw’s letter to colleagues asking them to sign onto his letter. (Courtesy of Andrea Gallagher)

Gallagher is charged with premeditated murder of an ISIS prisoner in Mosul, Iraq, during his last deployment in 2017, allegedly stabbing the prisoner with a hunting knife. He also faces other charges, including aggravated assault with a dangerous weapon and obstruction of justice.

Other service members who face charges under the Uniform Code of Military Justice are not being held in the brig, including two other Navy SEALs who are charged with strangling a Green Beret in Mali.