The names of crew members seen on the side of a B-24 bomber from World War II, last of its kind, at Fort Lauderdale Executive Airport on Friday afternoon Jan. 18, 2019. (Jennifer Lett/Sun Sentinel/TNS)
February 03, 2019 Sun Sentinel - Aric Chokey
Share
Tweet
Flip

A crowd of about two dozen people braced against gusts of a former fighter plane as its propellers readied for takeoff Sunday, Jan. 20.

The North American P-51 Mustang “Toulouse Nuts” fighter was one of three World War II planes that landed in Fort Lauderdale as part of the Wings of Freedom tour.

Now in its 30th year, the nationwide tour is meant to honor World War II veterans and act as a hands-on learning experience, according to the Collings Foundation, a nonprofit that put on the event.

Attendees were able to get up close, and inside, of planes similar to those that helped guide the outcome of one of the world’s largest conflicts. 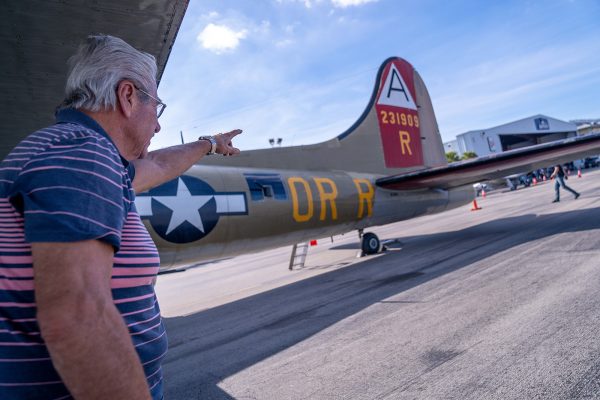 Mac McCauley, pilot of the B-17 bomber, points to the tail of the plane, “The ‘O’ was how the men would recognize their squadron and the ‘R’ was the type of plane — the white triangle was the first division,” he said at Fort Lauderdale Executive Airport on Friday afternoon Jan. 18, 2019. (Jennifer Lett/Sun Sentinel/TNS)

“It’s a great way to learn about history,” Dania Beach resident Jose Tuozzo said as he, his wife and son watched the Mustang taxi on the runway. “I’ve only seen these in movies. I love this.”

The show also featured a Consolidated B-24 Liberator, painted as “Witchcraft.” On the side of the plane were 130 bomb glyphs to represent the 130 combat missions Witchcraft had seen.

Nearby sat the Boeing B-17 Flying Fortress “Nine O Nine,” which is one of only nine in flying condition, said the foundation’s spokesman Hunter Chaney. 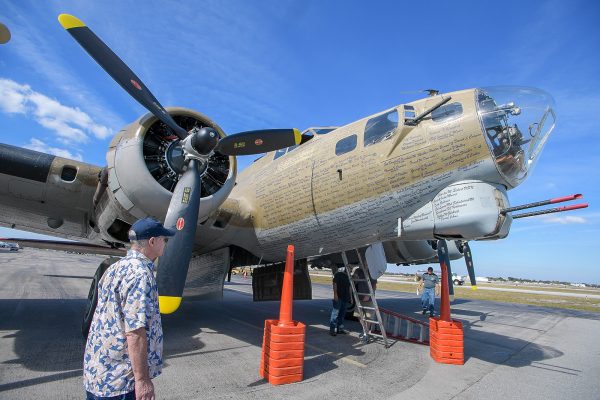 According to the foundation, “Nine O Nine” was restored as an ode to the original battle-hardened plane, which saw 140 missions and dropped more than 281 tons of bombs on Berlin, Germany in the campaign against the Nazi regime.

Many of the planes were scrapped after WWII, but the Collings Foundation restored the three on display.

Visitors were allowed to sit in the aircrafts’ cockpits and turrets. The event also allowed people to fly in the planes for a fee.

The age of true jetpack flight is near, and Special Operations Command wants in on it