An iconic statue of a sailor kissing a woman has been vandalized with “#MeToo” in Florida, just one day after the sailor depicted in the “Unconditional Surrender” statue passed away.

The statue, which depicts a sailor kissing a nurse, was discovered vandalized with red spray paint bearing a “#metoo” message across the leg of the nurse, the Tampa Bay Times reported Tuesday. 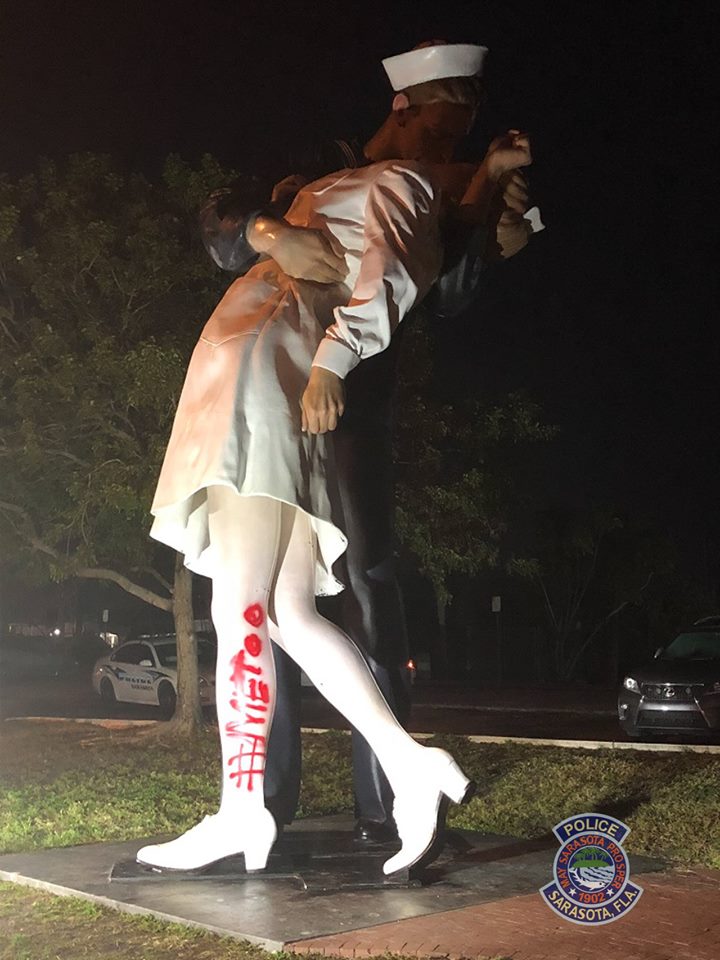 Sarasota Police conducted a search of the area and were unable to find any evidence tied to the vandalism. They think the incident occurred on Monday, and it will cost $1,000 to repair the large area damaged by the paint.

The statue was created by sculptor Seward Johnson in 2007 and was inspired by an iconic photograph of a sailor’s end-of-war celebration, during which he embraced a random stranger and kissed her in Times Square.

George Mendonsa was the sailor in the original 1945 photo, and he passed away on Sunday at the age of 95, NBC News reported.

The photo is considered one of the 20th Century’s most iconic images. It was taken on Aug. 14, 1945, the day news broke of the Japanese surrender in World War II, a day that is also known as V-J Day.

Crews are working to clean up the Unconditional Surrender Statue after someone vandalized it last night @FOX13News #sarasota pic.twitter.com/qDwGbyj0j9

The identities were finally revealed in 1980 after Life Magazine requested that the two people come forward. Mendonsa had insisted for years that he was the sailor in the photo, all while other sailors insisted they were the mystery man.

“He was very proud of his service and the picture and what it stood for,” his daughter, Sharon Molleur, had told NBC News. “Always, for many, many years later, it was an important part of his life.”

Greta Zimmer Friedman, the woman in the photo, passed away in 2016 at age 92, according to the Times of San Diego. She was a dental assistant who was visiting Times Square on her break when news of the Japanese surrender broke.

“I did not see him approaching, and before I know it I was in this vice grip,” she told CBS News in 2012.

“It was a wonderful coincidence, a man in a sailor’s uniform and a woman in a white dress … and a great photographer at the right time,” she added.

The vandalism was not captured on surveillance video. Sarasota Police have asked anyone to come forward with information on the vandalism.