Some dining facility meals are better than others. Stars and Stripes Reporter Chad Garland set out into the murky waters of Twitter to find out which ones are most beloved. Here’s a sampling of responses.

A very specific set of pancakes

Military mountaineering training and blueberry pancakes are apparently a match made in heaven.

Recognizing my bias here…In the Mountain Phase of Ranger School they could have fed me dried ketchup and I would have thought it a feast.

But good luck getting a photo of them.

Joint Base Anacostia Bolling (AF dfac) had the best breakfast bar for veggie omelets, even had spinach & Florentine cheese. So good! Also shout out to Slip Inn for fried chicken & fries. 🍴

Can’t go wrong with a taco.

Even if it’s Choco.

Manas AFB (rip) had choco tacos. Don’t really see anything that tops that except other choco taco prone facilities 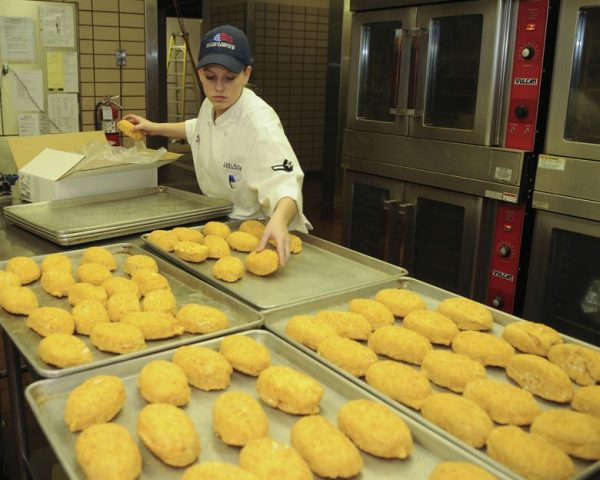 No hamsters are harmed in the making of this dish, promise, the pieces just kind of look like hamsters.

The yakisoba at Camp Hansen. Not as good as the stuff in town, but a pretty decent facsimile. Also, while not technically a chow hall, the Camp Hansen NCO club served a pretty mean fried chicken.

Surf and Turf Night or basically anytime Lobster was a option in the meal line , usually get to eat Lobster at least once a week here in Somalia at the DFAC . pic.twitter.com/9nftECMSMA

It’s late, but sometimes there’s something really good to eat.

I was partial to midnight shift biscuits and gravy at Goodfellow Air Force Base.

Egg burgers (Bacon cheese burger, with a fried egg slapped on top) at midnight, at Kunsan’s DFAC. Perfect whether you’re just getting off shift, heading into work, or coming back from a night on the town.

I loved the Italian Lemon cake at Fob Marez in 2008.

Sometimes, during midnight chow on Friday, the Filipino DFAC workers served Filipino food like Siopao. I was so homesick taking a bite would make me tear up. They also had karaoke during Friday night midnight chow 😂

Almost half a cherry pie at OCS. It was partially frozen, so the lady couldn’t cut it. She finally looked around conspiratorially, put the whole thing on my tray, and said “hurry and eat it before they see you.”

I don’t know about meal, but item: white chocolate macadamia nut cookies. Balad Air Base, DFAC-2, circa 2005/7/9. I called them “war cookies.” I miss the war so much. I mean cookies. I miss the cookies.

It’s been 25 years, but I still remember the fantastic chocolate cookies our mess hall made at Ft. Bragg. We’d try them at other mess halls, and they would suck, but our cooks did something different (it was probably something gross, but everyone who ate them loved them).