Former Marine Corps Sergeant Calvin Smith served two combat tours in Iraq, and had his left leg below the knee amputated in 2007, the result of a traffic collision in San Diego County, is about to finish the requirements to become a Pilates instructor in the next month, and teach at Club Pilates in San Marcos where he has been working out. (Howard Lipin/San Diego Union-Tribune/Zuma Press/TNS)
January 12, 2019 Pam Kragen - The San Diego Union-Tribune
Share
Tweet
Flip

Over 10 years beginning in 2003, Marine veteran Calvin Smith endured 21 surgeries and a leg amputation caused by war injuries in Iraq, a motorcycle accident and a brain tumor.

But looking back on that devastating decade, the 37-year-old Vista, Calif., resident said he wouldn’t change a thing.

On his road to recovery, he fell in love with his speech therapist and she’s now his wife. He also discovered Pilates, which has so reshaped his mental and physical health that he’s now becoming an instructor. His new mission in life is to share the health benefits of the strength-training exercise program with other veterans who’ve experienced traumatic injuries.

“My message is that just because you’re wounded, that doesn’t mean you can’t do something,” he said. “The only person holding you back is yourself.”

Smith is the first veteran amputee in training to become an instructor for Club Pilates, which has 400 gyms nationwide and 250 more scheduled to open this year, said Tianna Strateman, vice president of education for Club Pilates.

“Calvin is definitely a rock star,” Strateman said. “I can’t say enough about him and everything he’s accomplished. We’re excited about his teacher training and becoming an instructor for both regular members and others in the military. He’s our first and we hope he won’t be our last. He’s a trailblazer.” 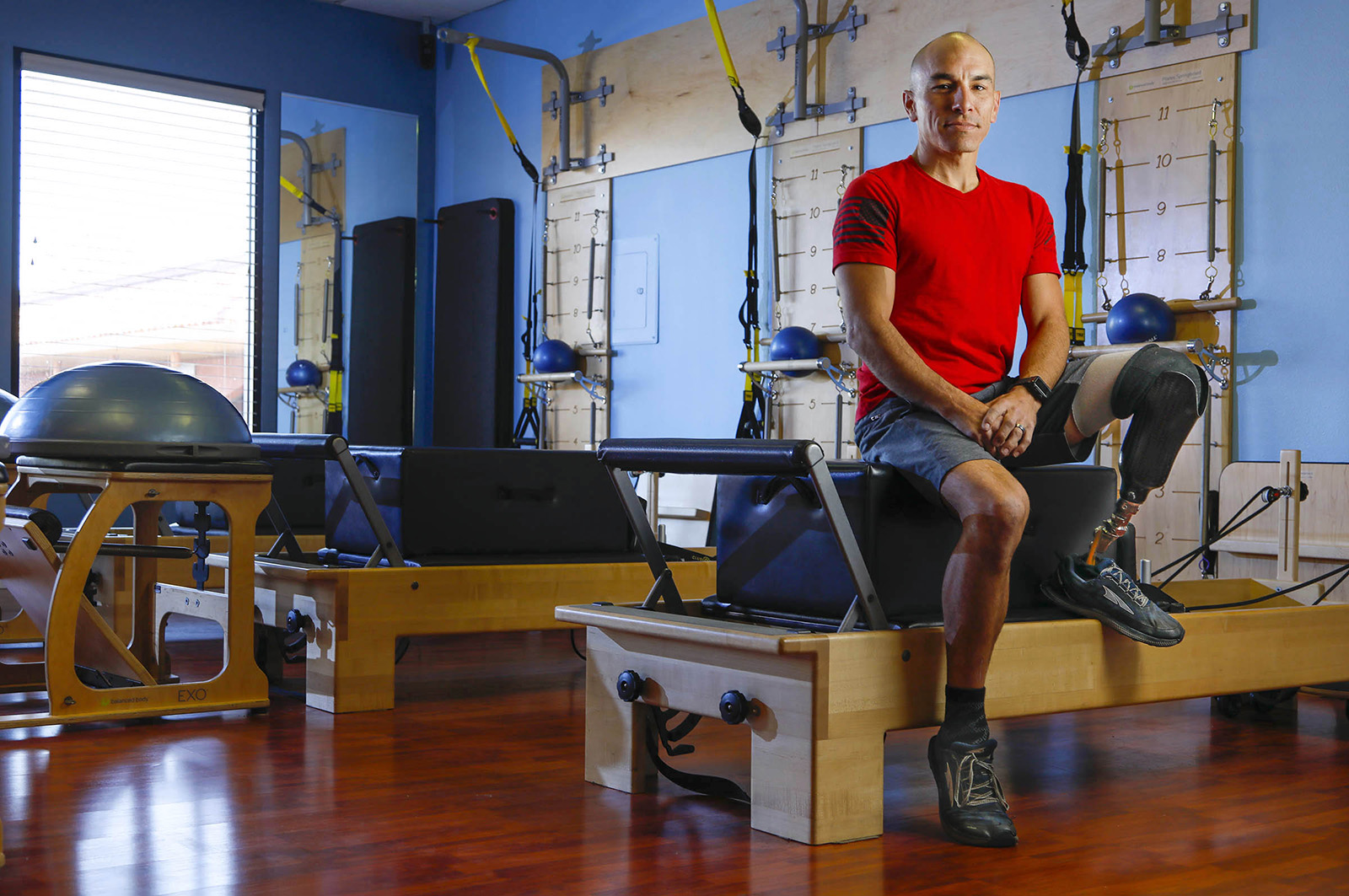 Former Marine Corps Sergeant Calvin Smith served two combat tours in Iraq, and had his left leg below the knee amputated in 2007, the result of a traffic collision in San Diego County, is about to finish the requirements to become a Pilates instructor in the next month, and teach at Club Pilates in San Marcos where he has been working out. (Howard Lipin/San Diego Union-Tribune/Zuma Press/TNS)

Smith grew up in Mesa, Ariz., where he said he had a Marine Corps poster tacked up on his bedroom wall by the time he was in second grade. Serving in the military was the family business. His grandfather spent 33 years in the Navy and his father did three tours in Vietnam.

In high school, he enlisted in the Marines on delayed-entry status and spent most weekends drilling with other recruits before heading to boot camp after his senior year in 2000. As an infantryman, he was stationed at several international bases. Then, after the terrorist attacks on Sept. 11, 2001, he prepared for war.

On his first seven-month deployment to Iraq in 2003, he suffered a brain injury and five herniated discs in his upper spine when the Humvee he was riding in struck a hole in the road caused by a tank. He returned to Camp Pendleton for spine fusion surgery and a period of recuperation. He returned to Iraq in 2006, where he aggravated his back problems, which led to more surgeries.

On May 30, 2007, Smith had just finished processing his final discharge papers at Camp Pendleton and was riding home on his motorcycle on Interstate 5 when he was nearly killed in a three-vehicle crash. Smith collided with a speeding car, which pushed his bike into the next lane where he was hit by a second car.

Smith has no memory of the accident, which shattered his right wrist, damaged the muscles in his right arm, caused a traumatic brain injury and broke most of the bones below the knee in his left leg.

As a result of the brain injury, Smith struggled with short-term memory loss and word finding. Five months after the accident, he started therapy at the Brain Injury Day Treatment Clinic at Scripps Memorial Hospital Encinitas.

That’s where he met his future wife, Kristina Reinhold-Smith. After he graduated from the program, they started dating in 2009. They married in December 2010 and share a combined five children from their previous marriages.

Reinhold-Smith, 43, said it was difficult seeing her husband struggle with his health. He suffered chronic pain and muscle spasms related to his spine and leg injuries and he battled post-traumatic stress disorder and depression.

Although he underwent multiple surgeries to repair his leg, he still spent most of his time in a wheelchair or with a cane. Finally, in 2013, he decided to have the lower limb amputated. His only regret is that he didn’t do it sooner. Now he enjoys hiking outdoors with his children and shopping trips to Costco, outings he couldn’t do before.

After leaving the service, Smith spent 18 months at Palomar College, studying to become a transition liaison for discharged veterans. But because of his brain injury, he couldn’t retain the course material despite long hours of studying and he failed most of his classes. Then, during a checkup in early 2017, doctors found that he had a brain tumor, which they removed.

Smith was depressed, overweight, out of shape and unsure what to do with the rest of his life. Then, in April 2017, he and his wife decided to take a class at Club Pilates in San Marcos. Before they finished their introductory class, he had decided to sign up for unlimited visits.

“I could feel my body being challenged but not that jarring, squishing pain that you get with other workouts,” he said. “I knew this was something I could do without injuring myself.”

Developed in the early 20th century by German fitness trainer Joseph Pilates, Pilates is a strength-and balance-training fitness program that uses floor exercises, equipment and a table-like gym apparatus to do core-building exercises.

Strateman said Pilates is ideal for people like Smith with disabilities or physical limitations because the regimen can be modified for each user. “The goal is to make it the best for one person, not a one size fits all.”

Smith began taking classes at the San Marcos club every day, which helped him shed 45 pounds. And through interacting with trainers and fellow students at the club, it also helped him come out of what he calls his “bubble of isolation” at home.

Over the past year, Smith has completed nearly 500 hours of classroom, fitness and assistant teacher training. Once he finishes his teaching hours and an anatomy class next month, he’ll be certified to teach classes at several North County clubs. Eventually, he hopes to teach Pilates to Marines at Camp Pendleton.

Reinhold-Smith, who now works as a speech therapy manager for Kaiser Health, said she’s been amazed by her husband’s transformation. He no longer walks with difficulty, no longer suffers muscle spasms and his personality has been transformed.

“He was really depressed before the brain tumor was removed and was increasingly isolated and trying to figure out his future,” she said. “Coming here gave him a purpose for his day. He’s a people person and a natural teacher, so being here makes him so much more happy.”

Smith said he’d like to bring more men into the fitness program, which is primarily practiced by women. Reinhold-Smith said she thinks her husband’s recovery through the program might be an incentive for other veterans struggling with amputations and chronic pain.

“I think he could become an ambassador for people with injuries who are looking for something,” she said. “He has a lot to give back to people.”