Wally is bashful, a big teddy bear who likes to snuggle and give hugs, an animal so at peace that he befriends the little goldfish and bullfrogs he’s supposed to eat.

That hissing noise is just his way of saying hello.

Joie Henney, 65, said these things about Wally, the 5-foot long, 60-pound alligator that lives in his York County living room, but the words don’t sink in and certainly don’t make sense while you’re sharing a couch with said alligator. When the flight or fight panic fades, though, it does appear that Wally is snuggling with Henney on the other end of the brown sectional, often resting his snout on his lap instead of tearing off his ear with a trademark death roll.

“He likes to give hugs,” Henney said. 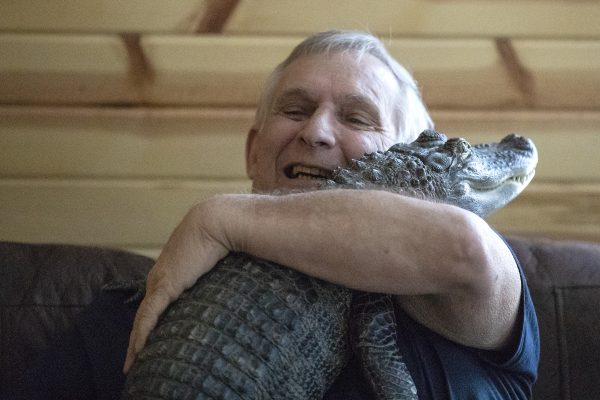 Wally is Henney’s registered emotional support animal, like a golden retriever, but cold-blooded. His story is the latest, and perhaps most extreme, in the growing world of ESAs, which are often approved by doctors and granted access to restaurants, businesses, and even airplanes. An emotional support peacock was banned from a flight last year.

Recently, the Inquirer and Daily News reported that more college students are bringing ESAs into dormitories.

A man who answered an e-mail from a reporter about Wally from the web site Service Dog Registration of America said, “Our therapist would never approve a client to have an alligator as an emotional support animal.”

“My doctor wanted to put me on depression medicine, and I hate taking medicine. I had Wally, and when I came home and was around him, it was all OK,” he said. “My doctor knew about Wally and figured it works, so why not?”

The depression rolled in quickly like a summer storm, with the death of three close friends in rapid succession. The feeling sat over Henney, and he feared it would never move on.

“Three lifelong friends,” he said, taking a long pause and reaching for tissues. 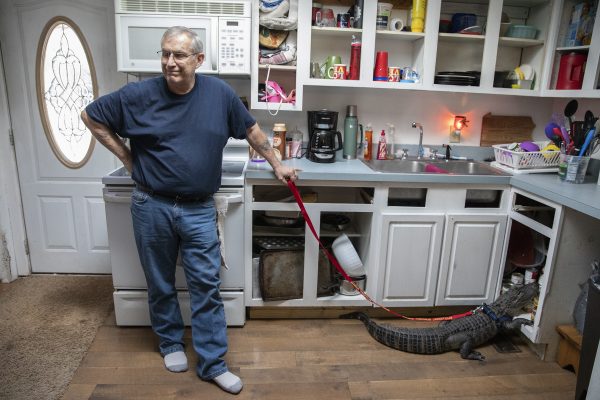 Henney grew up on a farm nearby in Dover, York County, nursing injured owls back to flight. He was in the Marine Corps and rode bulls in the rodeo and broke wooden boards in half as a skilled martial artist. He made a living in construction and later, hosted a hunting and television show locally.

The three men who died within days of each other were all woven into those decades, he said. Somehow, Wally filled the void, the camaraderie he lost. One day, he came and slept with him when he was sick.

“We caress and wrestle. He loves to wrestle,” Henney said. “He whacks me with his tail.”

Henney has five children and 18 grandchildren, and most of them, he said, are fine with Wally.

“I kept my distance at first from him,” said Henney’s girlfriend, Liz Caswell.

Wally, who will be four in July, was rescued from just outside Orlando when he was 14 months old. Henney said Wally could grow anywhere from 14 to 16 feet long and weigh 900 to 1,100 pounds. Wally eats chicken wings and shares a 300-gallon plastic pond, indoors, with Scrappy, a smaller, younger alligator the family has also rescued. Wally’s favorite programs to watch on television, of course, are Gator Boys and Swamp People. He also likes to watch The Lion King. 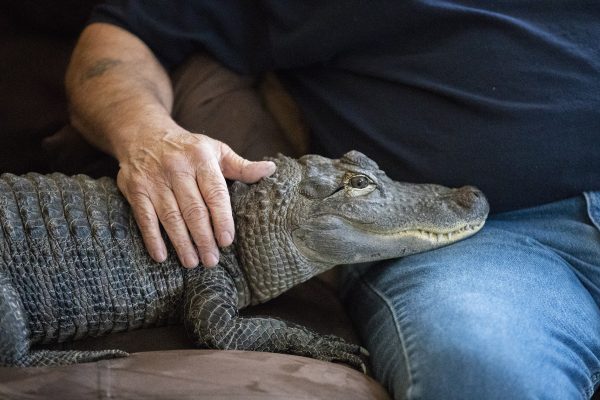 Alligators are undeniably dangerous, though more so for dogs and cats than humans. Florida, home to 1.3 million alligators, has tallied 410 unprovoked bites and 25 fatalities between 1948 and 2018. In one infamous case, a young boy was snatched and drowned by an alligator while on vacation at Disney World. That boy, Henney pointed out, was not eaten.

Wally, Henney cautioned, is still a wild animal, one that could tear his arm off now, and do worse later. But he doesn’t think that will happen. Wally has appeared at senior centers and minor league baseball games in York. He’s got a meet-and-greet at York’s Central Market next month.

“He has never tried to bite no one,” Henney said. “I don’t push him on to people. I tell people to respect him, not fear him. He will not hurt you.”

Once harnessed, with his red ESA leash on, Wally grows animated, eager to scamper around the house and bolt into a cabinet, by the kitchen sink.

Cans of tomato sauce and pink salmon roll across the floor.

“You know, whatever works for you,” Henney said. “Dogs and cats don’t work for me.”

Despite record earnings, defense firms laid off nearly 1,500 over the past year