PHOTOS: The Naval Academy is deteriorating so badly, its mission to train midshipmen is under threat

These aren’t the issues of a long-abandoned factory. They describe the current condition of the Naval Academy.

Infrastructure at the naval institution in Annapolis has degraded to the point of threatening the school’s ability to train and educate midshipmen, according to a report by the Naval Audit Service. The 2018 audit, obtained by The Capital Gazette through a Freedom of Information Act request, details failing buildings, classrooms and athletic facilities — which in some cases actively leak, overheat and threaten user safety. 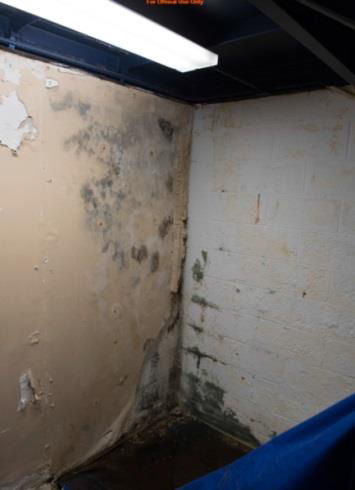 The report took stock of 13 unfunded maintenance or renovation projects spread among 15 facilities between March 6, 2017, and April 26, 2018. Ten of these facilities are highly important to the academy mission, according to its internal rating system. But of those 10, four rated “poor to fair” and five rated “failing to poor” at supporting the academy’s ultimate goal — to ready midshipmen for naval service.

The auditors found a maintenance backlog exacerbated by steep funding cuts after the Naval Academy lost its Flagship Institution designation to the 2013 federal budget sequester. The designation promised the academy funding for both regular repairs and major renovations.

To dam the deluge of problems, the Navy restored the Flagship Institution designation for the academy, Naval Postgraduate School and Naval War College. The academy will get $15 million every other year, beginning in fiscal year 2020. The Navy will also support the maintenance budget at a higher level.

“USNA concurs with the findings of the audit,” Cmdr. David McKinney, a Naval Academy spokesman, said in a prepared statement. “We look forward to addressing the discrepancies in the report and with additional funding look forward to ensuring the Naval Academy remains a modern Flagship Institution for the Navy.”

The Naval Academy continues to do emergency maintenance — including recent repairs to the Bancroft Hall roof and the Leahy Hall roof that was blown off during a wind storm last year, said Ed Zeigler, a spokesman for Naval District Washington. But to fund large-scale infrastructure projects, the school competes for money against other projects in the Washington, D.C., Naval District.

The academy submits projects to the district, which prioritizes and passes them on to Shore Mission Integration Group, a Navy body responsible for balancing priorities at sea and on the shore.

Even with the new money, it would take years to address all of the problems listed in the audit.

A project to repair the HVAC system in Rickover received $44.5 million in funding in August 2017. The chapel will undergo renovation for $8.9 million. 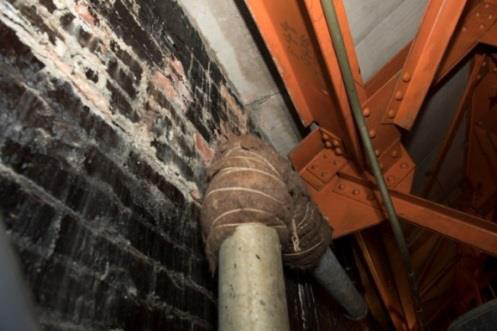 The Navy did not release the costs of all unfunded projects.

“We have a list of things that we would love to do, but it all is dependent on money,” McKinney said. “We communicate with them regularly — they know our needs.”

The problems stretch further back than this decade or the last.

The Macdonough Hall gym, built in 1903, has never had a major renovation. And while nearly three-quarters of midshipmen use the gym to stay in shape outside varsity sports, the deteriorating building threatens the Naval Academy’s ability to continue physical training for midshipmen.

The building leaks. There is mold growing along a stairwell wall next to the pool. The balcony above the pool, sitting atop rusted columns, is condemned and 14 years past its life expectancy, auditors found.

Macdonough Hall houses the combat training pool, which academy staff said is leaking. The pool basin is five years past its life expectancy, with exposed rebar pock-marking its underbelly. The mechanical systems regulating the pool also outlived their usefulness, leading to higher amounts of chlorine in the pool. According to an April 2015 evaluation, high chlorine levels create adverse health effects.

The Nimitz Library hosts its own set of problems. Built in 1975 and never updated, the library has doesn’t have enough electrical capacity to support visitors and students using laptops and charging cellphones. Some electric panels are obsolete and cannot be replaced.

If someone in a wheelchair wants to navigate between the stacks, that person likely can’t. The bookshelves are too close together and violate a federal law requiring equal access for people with disabilities to federally funded buildings. 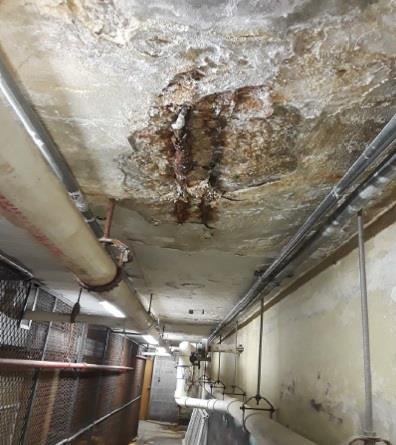 Among the most startling discoveries, the library sprinkler system does not cover the entirety of the building — and the fire alarm system “is antiquated and does not provide mass notification,” according to the report. It didn’t work for most of 2016 and some of 2017.

Bancroft Hall, the academy’s only dorm, sits atop a deteriorated drainage system, which cannot be repaired, auditors wrote. The water it collects from storms is flowing off rooftops, concrete and other impervious surfaces into the Severn River without any treatment.

Though the Naval Academy admitted women in 1976, if female midshipmen want easy access to the bathroom in Nimitz or in Rickover Hall, they’re out of luck.

Rickover, which houses the engineering and weapons department, gets so hot, the academy has canceled classes. Department personnel report midshipmen have difficulty “staying engaged during classes,” auditors wrote. Water stains bloom on ceiling tiles, some of which are missing because of damage and mold.

Some of the water dripped onto expensive lab equipment, per the report, which then overheated when staff tried to protect the equipment with plastic. Repairs are now necessary.

The Oceanography Pier is so deteriorated, a crane for loading Yard Patrol boats is inoperable. Midshipmen have to move equipment, some of it up to 300 pounds, themselves. The chapel has been leaking for 114 years, causing water damage to its infrastructure. Dahlgren Hall hosts condemned offices due to asbestos and mold. Failed plumbing in Alumni Hall caused a pipe to burst and soak one of the locker rooms.

Another $10.9 million went toward the Alumni Hall parking garage, completed this year after construction stalled and had to be redone.

Construction of Hopper Hall, a cybersecurity center, continues along the Severn River.