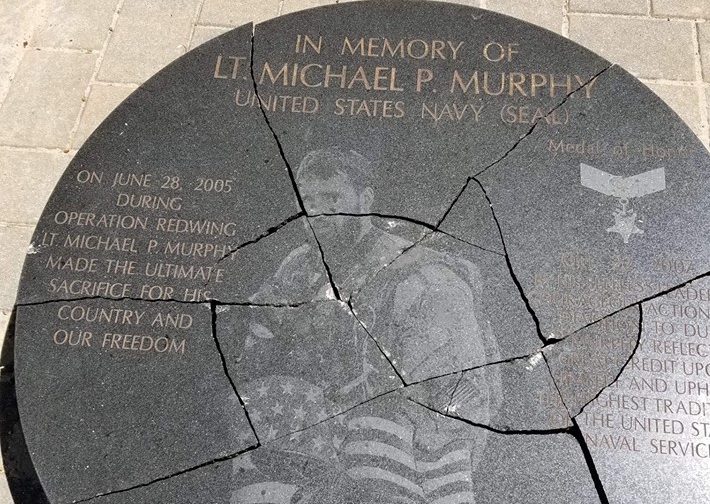 On Thursday, as a new stone recalling Murphy’s heroism was installed at the Lake Ronkonkoma park that bears his name, Daniel Murphy said efforts to replace the broken monument mirrored the dedication of his son and those who served alongside him.

Suffolk police said the previous plaque was shattered last July by a 14-year-old boy, who was charged with second-degree criminal mischief. Police did not release additional information about the teen’s case because of his age.

The new 400-pound plaque — identical to the old one, but more than three times thicker — was fabricated and donated by Kings Park-based Art Stone & Memorial, using a granite slab donated by Lido Stone in Calverton.

Brookhaven Town, which owns and operates the park on the south shore of Lake Ronkonkoma, said it has improved security at the memorial since the incident by installing surveillance cameras and additional lighting.

“We have cameras and lights so if anyone is vandalizing anything, we will find out,” Brookhaven Supervisor Edward P. Romaine said, adding Michael Murphy was “the best of our country. He is immortalized on this stone but he’s remembered in our hearts.”

Murphy was killed in Afghanistan in 2005 while leading a four-man SEAL team on a covert mission in the Hindu Kush mountains near Pakistan. He was posthumously awarded the Medal of Honor two years later.

The battle in which Murphy died was depicted in a 2014 movie, “Lone Survivor.”

Members of the Murphy family and officials said the 14-year-old likely was not aware of the plaque’s significance when he damaged it.

Suffolk Police Commissioner Geraldine Hart, who also spoke at the ceremony Thursday, said officers and detectives moved quickly to investigate the monument’s destruction, adding they also took time to counsel the defendant and his friends.

“They had an extra incentive to apprehend these individuals. They would have moved mountains for this, and they did,” Hart said. “I’m proud of our department and how they responded at that time.”

Tom Ronayne, director of Suffolk’s Veterans Service Agency, praised Murphy’s family for their public displays of empathy toward the boy.

“Where other people would have anger, they showed compassion and love,” he said. “That’s a testament to Michael Murphy as a man.”

The new plaque is expected to be much more resilient than its predecessor, because of its larger size, said Peter Marmorato and his sister, Gina Dougherty, who co-own Art Stone and donated the memorial.