The Navy christened and launched its newest littoral combat ship, the USS St. Louis, during a recent ceremony in Marinette, Wisc.

Barbara Broadhurst Taylor, the ship sponsor and the daughter of World War II pilot Lt. Gen. Edwin Borden Broadhurst, christened the St. Louis by breaking a bottle of sparkling wine on its bow Saturday. U.S. Sen. Roy Blunt, R-Missouri, was the principal speaker at the event. 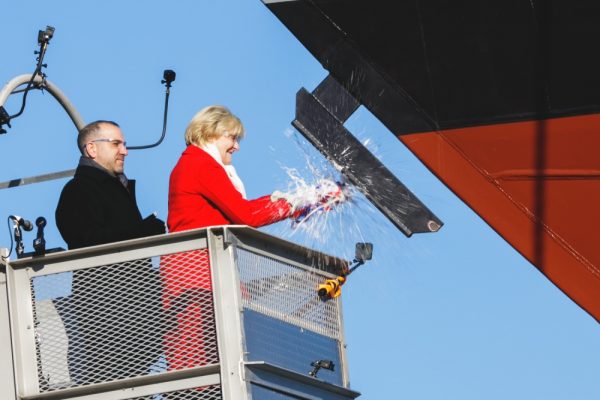 The Lockheed Martin-built Freedom-class LCS boasts new technology and capabilities allowing the ship to take on any mission from deep water to the littorals, according to a Navy statement Friday.

The ship is a fast, maneuverable, focused-mission platform designed for near-shore operations and will specialize in countering threats such as quiet diesel submarines, mines and fast surface craft, the statement said.

“I am thrilled and very honored to be the sponsor of the future USS St. Louis,” Taylor said during the ceremony. “The combination of my family’s military background and the enduring spirit of the great city of St. Louis make this incredibly meaningful.”

During the ceremony, Barbara Taylor placed two combat ribbons in the ship’s steel box to represent the Purple Heart and Distinguished Flying medals her father received in World War II. The ship’s box, at the base of its mast, remains on board for its entire service life. 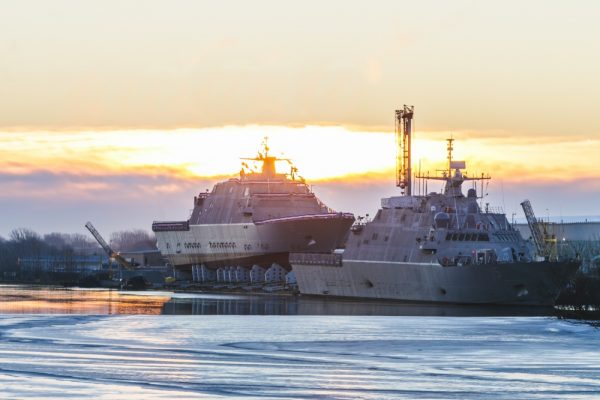 The Navy prepares to christen the future littoral combat ship USS St. Louis (LCS 19), left, in Marinette, Wisconsin, Dec. 15, 2018, as USS Billings (LCS 15) is under construction and preparing for commissioning. Once commissioned, LCS-19 will be the seventh ship to bear the name St. Louis, while LCS-15 will be the first U.S Navy ship named after Billings, Montana. (U.S. Navy/Released)

The St. Louis is the seventh ship to bear the name of Missouri’s major port city. The first St. Louis was commissioned in 1828 as a sloop for most of the 19th century. The next was a gunboat during the Civil War, followed by a steamer troopship in the Spanish-American War, a World War I cruiser, a World War II light cruiser, and an attack cargo ship during the Cold War, according to the statement.

“This christening marks the transition of USS St. Louis being a mere hull number to a ship with a name and a spirit and is a testament to the increased lethality and readiness made possible by the combined effort between our industrial partners and the Navy and Marine Corps team,” Secretary of the Navy Richard Spencer said in the statement.