PHOTOS: In life, these horses re-enacted the Civil War. In death, they rest in an unusual Missouri cemetery

As Terry Crowder walks past the simple white crosses in this unusual cemetery in Spanish Lake, he can remember each of the fallen: 16 horses that have ridden into battle with Crowder and other Civil War re-enactors, fake though the battles were.

On a brisk fall day, Crowder, 70, reminisced about Beau, an exceptional horse he bought for a bargain price because he was stubborn and hard to break. It took Crowder two years to tame him enough to put a saddle on his back. After that, Beau carried Crowder in countless Civil War re-enactments and educational programs.

Beau loved kids — and gunfire. Most horses fear the noise and are difficult to train for re-enactments that include gunshots, cannon fire and explosions. But not Beau.

“When he would hear it, he rode toward it,” Crowder said of the beloved horse that died five years ago at 29. “He became the best horse I ever had. … When he died, it broke my heart.

“There is a story with every single horse here,” Crowder said, his eyes glistening. 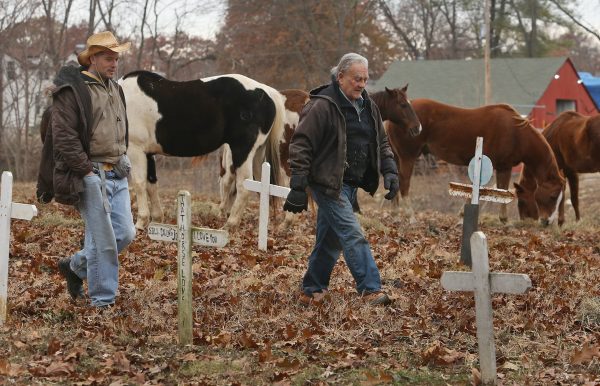 The horse cemetery is on a small part of 38 acres at 12000 Larimore Road, and is shared with 14 living horses that roam and occasionally escape from the Spanish Lake property. The farm was Crowder’s but is now owned by the Cavalry Brigade of the First Federal Division, a Civil War re-enactment group. Crowder is chairman of the board.

The animals on the property belong to members of the Cavalry Brigade or have been turned over to the brigade itself. A few are younger horses training to become warhorse re-enactors. Many are older animals living out their golden years.

The Cavalry Brigade is a nonprofit that considers itself an educational living history organization. Members teach history along with responsibility and manners to youngsters. They dress in historic uniforms and show off equipment from the time. The group also works with special needs children and veterans.

“We explain what soldiers did in the Civil War and how our country became what it is today,” Crowder said.

The Cavalry Brigade holds Civil War re-enactments, sometimes on a grand scale. From April 11-14 it will be part of a huge re-enactment at Pyramid State Recreation Area near Pickneyville, Ill. Thousands of re-enactors with at least 60 cannons and plenty of horses will camp and “fight” for four days, like soldiers did more than 150 years ago.

Members also travel with their horses to area schools and events to teach about the Civil War. They use the Spanish Lake property and a two-story brick house there, built as the war was winding down in 1865, for educational programs as well.

The horses are sometimes tapped to appear in movies, such as the Revolutionary War film “The Patriot,” the Civil War film “Glory,” the post-apocalyptic movie “The Postman” and the Custer miniseries “Son of the Morning Star.” The animals count Mel Gibson, Denzel Washington and Kevin Costner as co-stars.

Crowder stops in front of a marker with the name “Lady” written on a white cross.

“This one here, she was one of my very best horses,” he said. “She pulled a buggy with the cannon on it. … She did parades. And, I don’t know, hundreds and hundreds of kids learned to ride on her. She was as gentle as a kitten.”

The horse, a “beautiful white mare,” was euthanized after she was diagnosed with cancer.

Crowder has been working with the horses for decades, and began burying them on the farm in the 1980s. He has pictures of every horse buried at the site. Though he says it can be heart-wrenching to see the crosses and remember the horses he’s lost, he said it’s the right thing to do.

“I should never have started burying them, but once they came here they became part of our family,” he said. “That is what this property is about. They are like my family, my friends. It’s been that way over 30 years.”

When a horse dies, group members use an excavator or backhoe to dig a large hole, then place a favorite blanket or halter in the grave with the animal.

“We reflect on the memories they gave us,” Crowder said. “Animals play a big part in people’s lives. To throw them away just doesn’t seem fair to us.” 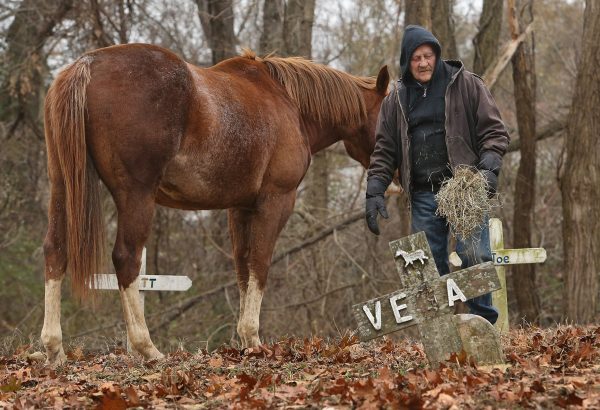 Linda Miller of St. Charles began volunteering with Calvary Brigade while grieving several personal losses in her life and had no intention of forming ties with an animal. Then she met Little Joe, a 2-year-old gelded quarter horse that had been rescued from an owner unable to care for him.

“Joe was a phenomenal horse,” she said. He traveled across the country to Civil War re-enactments, “stood next to live cannon fire, and whinnied every morning when I came out of the tent. He was a brave young horse.”

Miller didn’t think she would be able to return to the barn, but she knew the other horses needed her.

“I came back every day because Joe’s grave is there,” she said. “I sat with him and stayed because of the other horses.”

Despite the loss of Joe, Miller said working with the horses on the farm gives her peace. Crowder gave her another quarter horse, named Jax, and she’s stuck with him since 2012.