Lang Shan Mei used to stand on her jetty and watch the construction of the towering bridge taking shape near her village in the Pearl River Delta.

Then one day a year back, when the vast expanse was about half-built, building mysteriously stopped. The “headless bridge,” as locals now call it, looms over the murky water like a monument to uncertainty. 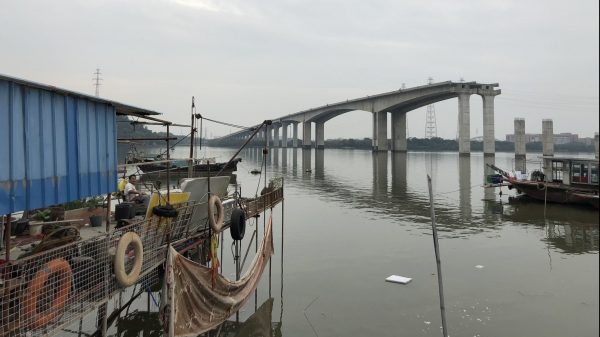 Lang and her neighbors wonder if the work crews will ever return, if the vast arc will ever join the shorelines, if the cars and the noise and the change it once promised will ever arrive in their tiny community.

“My parents and even my grandparents were all fishing people,” says Lang, who is 63. “We grew up on a boat. We never had any fear on the river because it’s in our blood.”

Her parents were married on that tiny vessel. At night, Lang and her brother huddled with her parents under an ancient quilt on the boat, bobbing on its anchor by the riverbank.

Just over 16 feet long, it was too small for the ocean. So her family cast its nets in the river. Half a dozen chickens or ducks hung in a basket cage over the water, getting soaked when the waves were high.

Today, Lang lives on land. When a typhoon screeches onshore, washing a foot of rank river water into the house, she and her husband calmly retreat upstairs to watch and wait. 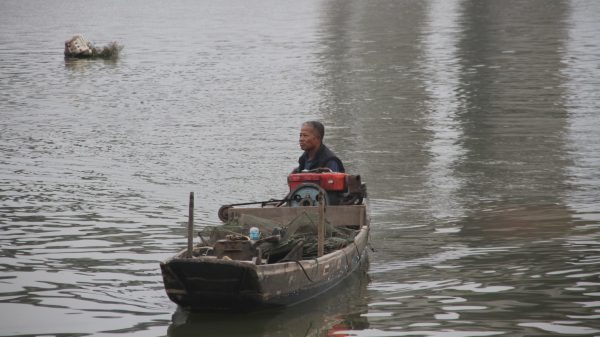 Their village of Xinzhou lies on a tributary behind a desolate wrecking site, where white floral weeds sprout in the detritus of abandoned bicycles, chairs, lumps of concrete, rubber and foam left when the government pulled down some illegal buildings.

A scrap of sky winks between the Xinzhou village buildings in the narrow main street, where families leave offerings of apples, juice and incense to the gods of the earth and the sea. Two skinny kittens and their mother huddle on a sack. A father whizzes by on a motorcycle with three of his children somehow piled onboard.

Each house has a metal jetty with planters, coils of rope, tangles of wire and piles of nets. An elderly neighbor, her hands swollen and her back bent with age, tosses fishing nets into the family’s boat. In buckets on her jetty wriggle a muddle of eels and a small turtle doomed to the cooking pot.

As a child, Lang longed for the rare days when her mother took her to the market to help sell their catch, where Lang lapped up the exciting smells and sounds, hoping her mother would buy a treat like chewy dried sweet potato or a wafer made of dried hawthorn berries and sugar. It made a change from watching her parents in the humdrum toil of fishing.

“Was I bored? Well, yes. We had very limited space and we just waited for our parents to feed us. As children of fishermen, we almost never went on the land.”

There were eight children in all, but Lang knew only two of them.

“The others got sick and died or fell in the river and drowned before I was born,” she said.

Her mother did her best to protect them, calling on the gods and employing traditional medicine to ward off ill fortune. She burned fake money, which was good enough to appease the gods, mixed the ashes with water and spooned the elixir into their mouths.

Lang and her husband, Wan Jiao Xing, were both 15 when they met.

He too was from a fishing family, which anchored its boat and slept at a small stilted hut on the riverbank. He learned to swim at age 3.

There were no weather forecasts, but elder fishermen knew when a storm was coming by looking at the sky, the light and clouds.

As the sturdiest boy in his family, Wan took over the heavy fishing work from his father at a young age. He had to pull in the fishing nets by hand, until cheap motors became available. They only made the job more brutal, with the equipment liable to chop off a finger or even snag an arm.

“I just wondered when these hard times would be over,” he recalls. “I had no time to pause and enjoy a soft breeze or anything like that.” 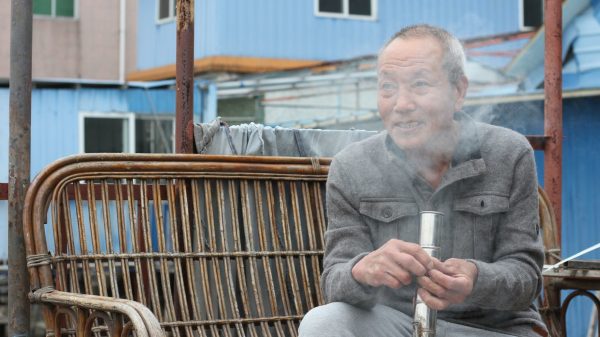 Wan Jiao Xing took over the heavy work of fishing for his family as a boy, after his father became ill. A few years ago, Wan too had to give up fishing because of health problems. Both of their sons opted out of the fishing life. (Gaochao Zhang/Los Angeles Times/TNS)

Still, he took pride in being stronger than “those city kids. They’re too spoiled and that makes them weak. If you grow up with a tough life, you will be a much stronger person. In this life, maybe there are massive waves or a typhoon, and they may cost you your life.”

Lang was one of the happiest and most vivacious girls he had ever seen, he says as he pulls out a cheap cigarette and limps slowly to the kitchen to find a juice carton for an ashtray.

They married at 22 and began their new life on a damp, decrepit vessel that Wan’s father gave him. It was tough to make a living, since the boat was too small and fragile to go out farther than 100 yards. But they were determined.

“I felt hopeful and optimistic,” Wan says. “We were poor, but not so poor that we had no food. I thought, ‘I’m young. I may be illiterate. But I can do many things. I can save money. I can get a new boat.”

The couple saved for at least five years to buy a bigger boat, enabling them to venture out further, to catch more fish and live a slightly better life. They had two sons. In 1998, they moved into the house with the jetty.

A few years ago, Wan had to give up fishing because of health problems. His wife could not run the boat alone, so she had to find work as a cleaner to support them.

Both of their sons opted out of the fishing life and got newfangled jobs, one in logistics and the other in a call center.

Now the jetty is as close as Lang and Wan get to the open water.

“I like to sit out there and watch things,” Wan says. “I feel very peaceful and comfortable sitting out there, because I don’t have to worry about fishing.”

But he and his wife understand that change is coming. Every year, the nearby megacity of Guangzhou sprawls closer.

A year ago the villagers were told that jetties and houses would have to be torn down so the city government could build a levee bank. The threat grew more real recently when the government warned that it would start pulling jetties if the owners didn’t do it themselves.

A harsh metallic hammering pierces the quiet noon hour, as a neighboring couple tears down theirs.

Wan and Lang are preparing to pull their jetty down too. They have already sawed through the metal uprights. They have no idea whether they will be able to save a room or two in their house from demolition or if not, where they would go.

A drone with a flashing red light swoops over. Locals say the government is monitoring them from the sky to ensure they don’t dump trash in the river as they tear down their jetties.

The couple are philosophical about the demolition plans. Change is like the weather, and they have seen a lot of that.

“The fate of these buildings is like the fate of your own life. You don’t know when it’s going to end.”

(Gaochao Zhang of the Los Angeles Times’ Beijing Bureau contributed to this report.)