An Okinawa-based Marine is up for global honors after being named the first USO Pacific volunteer of the year from the southern Japanese island prefecture.

Lance Cpl. Samuel Jacksonwest — who devoted 480 off-duty hours at the Camp Foster USO over the past six months — was honored for his efforts during a Nov. 28 ceremony at the Okinawa Marine base. He was chosen over top volunteers in Korea, Guam, Hawaii and elsewhere in Japan.

“I’m thankful for the opportunity to be recognized for doing a good deed, and simply to be an example to my peers that doing the right thing never goes unseen,” he told Stars and Stripes after receiving the award. “Helping other people pays off in the end.” 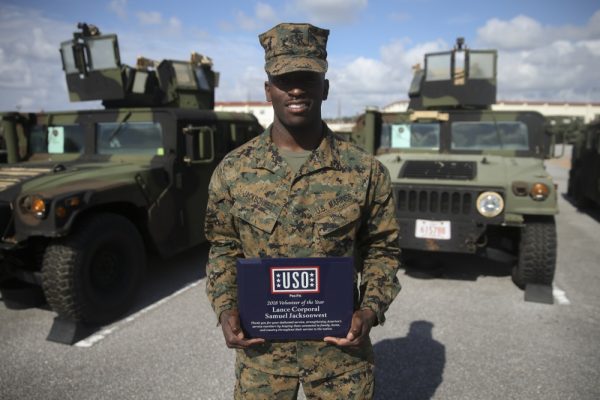 Lance Cpl. Samuel I. Jacksonwest received the 2018 USO Pacific Volunteer of the Year award on Nov. 28, 2018 at Camp Foster, Okinawa, Japan. Jacksonwest received the award for his 480 volunteer hours at the Camp Foster USO. Jacksonwest was the winner among 1,400 volunteers in the Pacific region and the first active duty volunteer to receive this award in the last 4 years. Jacksonwest, a native of Atlanta, Georgia, is a network administrator with Headquarters Company, Combat Logistics Battalion 4, Combat Logistics Regiment 3, 3rd Marine Logistics Group. (Lance Cpl. Armando Elizalde/U.S. Marine Corps)

The Atlanta native will compete against other top volunteers from the United States, Europe and Southwest Asia for the USO global volunteer of the year. That award will be given at a time and date yet to be announced.

The USO depends on its more than 30,000 volunteers to keep its mission of providing programs, entertainment and services to servicemembers and their families at more than 200 locations worldwide, according to the organization’s website.